Before we approach the precipice of game conventions, announcements, and releases for the summer, let’s take a moment to appreciate the month of May’s magnificence.

We’ve sorted through the latest new releases, remakes, cosmetics, and ports for looks that took our fancy - and rate them with our handy dandy rank-o-meter! The aggregate score from our panel of judges will determine who wins May’s “Outfit of the Month”!

As always, we’d love to hear any honourable mentions and suggestions for OOTM and other T-Pose articles for the future! Without further ado, may the best-dressed win! 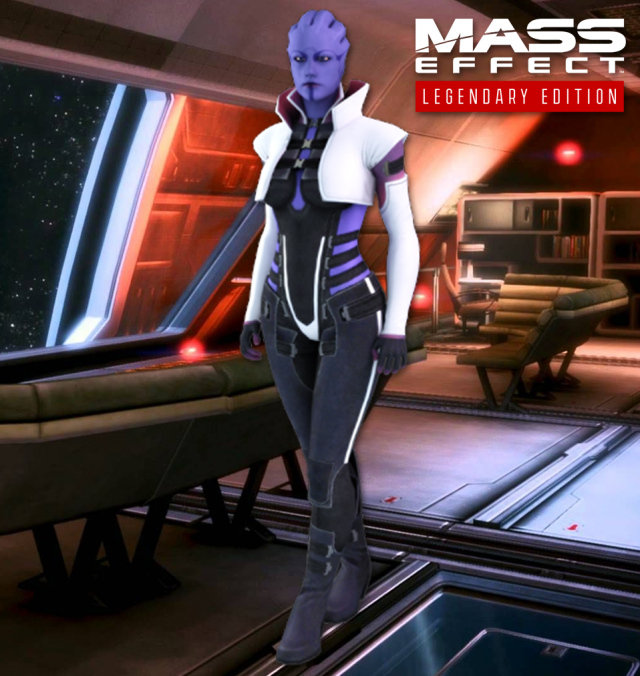 Pairing her unflappable attitude with a rare double high-collar, the proprietor of Afterlife and most powerful Asari on Omega, Aria T’Loak made her presence known way back in 2010 in Mass Effect 2 and in this month’s Mass Effect: Legendary Edition, her signature outfit has gone unchanged.

This simple ensemble might not be the flashiest piece we’ve covered, but it delivers on characterisation. I may be a tad biased with my love of high collars but here, the double-collar not only implies Aria’s well-earned position of authority, with the design choice also revealing her guarded, careful nature. Notably, the pink on the underside of her outer collar also highlights her intensity and nicely matches the pink of her bodysuit’s arms seen underneath her coat’s detached sleeves and her glove’s fingertips.

Additionally, while her overall black and white colour scheme is a classic and fantastic look, it doesn’t really have much of a deeper meaning, though I suppose, considering her more grey morality, you could consider it somewhat like an oxymoron. Still, that doesn’t stop it or the strap-based design of her bodysuit from looking absolutely cool. - Erin 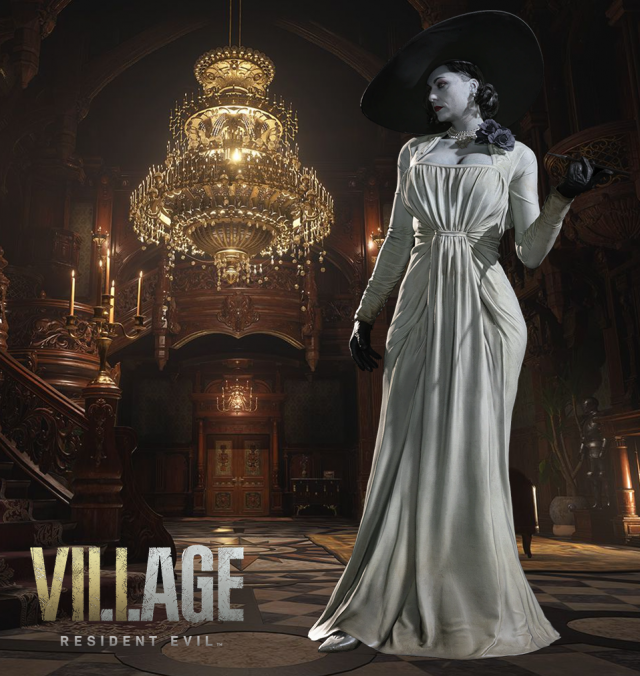 It would be a crime really, to omit Alcina Dimitrescu from this month’s feature, considering the amount of hype she whipped up for the latest Resident Evil Village whilst parading around in this get-up.

This outfit oozes 1930’s elegance and class. The long sleeves fit closely along her arms and shoulders and become more gathered towards her gloves, featuring delicate seams and buttons in what appears to be a matching fabric.

The fully covered shoulders and arms are contrasted by a squared neckline which along with the gathered fabric under her bust really accentuates her arguably most famous assets as well as giving her an (albeit very lengthened) hourglass shape.

The rest of the dress flows gracefully to the floor and looks like it was once all one soft ivory colour, but has seemingly ripened over time and changed with age. Perhaps this mirrors the wearer of the gown?

Although we can’t see the back here, the same buttons that appear on the gloves line up along the spine of the dress, hiding underneath a small cape that sits just above elbow height. This adds even more to the feeling of opulence of the outfit and is accentuated still further by her choice of accessories. Lady Dimitrescu chooses to decorate her look with a large-brimmed black hat which perfectly frames her carefully curled locks, as well as a pair of black gloves which hide some fairly sinister claws. A large black flower sits on her left shoulder because honestly why the fuck not? Everything is topped off by an extravagant string of pearls coiled around her neck that echo the mellowing ivory of the gown.

All in all, it’s a look that stands the test of time, but could probably use a trip to the dry cleaners. - Emsey 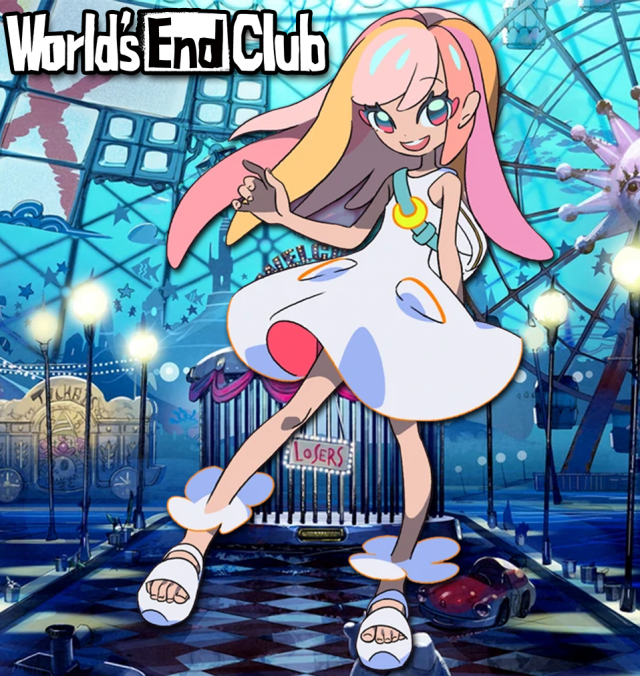 No matter how well equipped we may be for any situation; like a catastrophic earthquake, a nuclear apocalypse, or perhaps a game of death set by a robot clown in an abandoned underwater theme park - you’ll never be completely prepared whenever shit hits the fan… like en-route a primary school day trip.

The dozen 11-12 year old’s unfortunate enough to be in the predicament are a group known as the “Go-Getters Club”, a motley crew of Japan’s ultimate underachievers. Each of which displays typical anime and gaming tropes, along with a Chinese zodiac animal to reflect their characteristics and compliment their style. From the Earthbound inspired protagonist exhibiting zodiac monkey traits, the typical abrasive rival archetype with tiger stripes, to our pick of the bunch: Vanilla, the carefree happy-go-lucky lil' rabbit.

Flaunting a floaty white tank dress, Vanilla’s outfit is accented with pops of pastels throughout - the orange seams along the front pockets and hem of the circle skirt, the coral pink lining on the underside of dress, and teal strap on her bag. The look is paired with some chunky white sandals and funky oversized daisy-like anklets.

Her white satchel bag hidden behind her has a personality of its own - with two oval buttons that sit at the end of the bag and a little red tag sticking from the bottom, looking like a cheeky little face!

There’s also two golden crescent moons attached to the satchel, one as a keychain, the other a buckle on the strap, referencing her connection to the rabbit zodiac animal (based on folklore-inspired by the dark markings on the moon that look like a hare!). The rabbit motif continues with her pastel pink and orange locks, which resemble floppy bunny ears! - Danielle 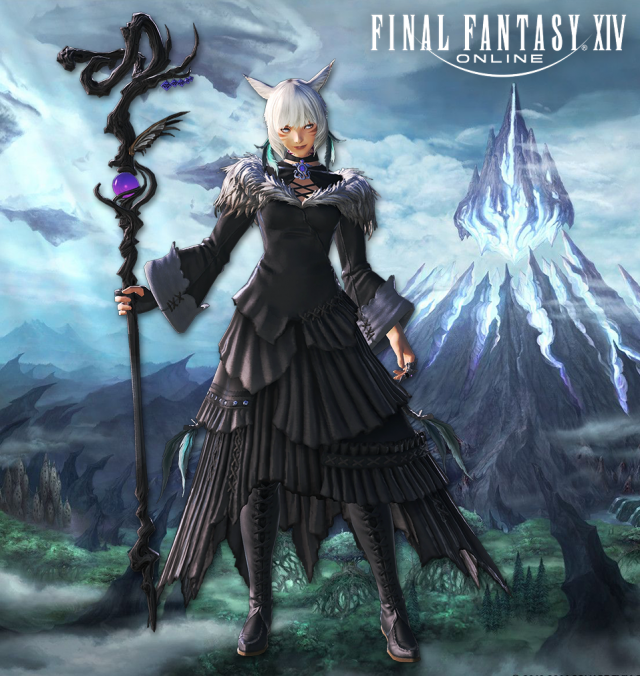 While many characters in Final Fantasy XIV have worn some impressive outfits over the course of the game's many expansions, none are arguably more recognisable than Y'shtola Rhul. This Conjurer has become the poster girl of the title, and with it releasing on PlayStation 5 this month, it seems like a great chance to include her on this list.

Looking at her latest outfit, as seen in the Shadowbringers expansion, we see Y'shtola embrace a Gothic Lolita look as she delves into the dark arts, leaving her normally white outfits behind in favour of a simply stunning black sorceress’s robe.

While simple and sleek at first glance, there is a lot of detail to be found across the robe, including a grey fur lining, layered frills in the skirt, and purple gems stitched into one side for extra flare. To complement this, Y'shtola wears black thigh-high boots, a black ribbon topped with a purple gem on her neck, and even has claw-like finger jewellery to bring it all together. Finally, the outfit is finished off with a simple two-piece feather earring that matches Y'shtola’s white hair perfectly.

With this look, Y'shtola shows that sometimes even a simple outfit can be a real standout success. With colours that work well together, an attention to fine detail, and accessories that aid in the aesthetic, Y'shtola makes sure to look stunning no matter the occasion. - Judgemental Waifu 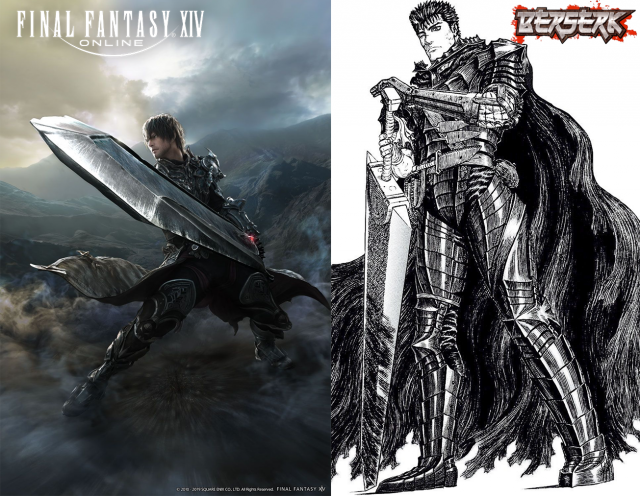 Kentaro Miura - the mastermind behind one of the most influential manga series Berserk, passed away on the 6th of May. Spawning anime shows, films, and videogames through the ages, the series’ character designs, themes, and artistry has influenced generations of people; it’s imprint being visible in all forms of media.

On Thursday 20th, players of the online MMORPG game Final Fantasy XIV held multiple in-game memorials paying tribute to Miura, many of which had characters sporting the “Dark Knight” class hero which resembles the protagonist Guts from Berserk.

What a series of heavy hitters! This month was especially intense with some huge games - but only one can grace the cover! Tallying all the scores together, our Outfit of the Month is Y'shtola Rhul from Final Fantasy XIV, available to play on PlayStation 5 consoles in May, as well as Microsoft Windows, Mac OS X, and PlayStation 4! 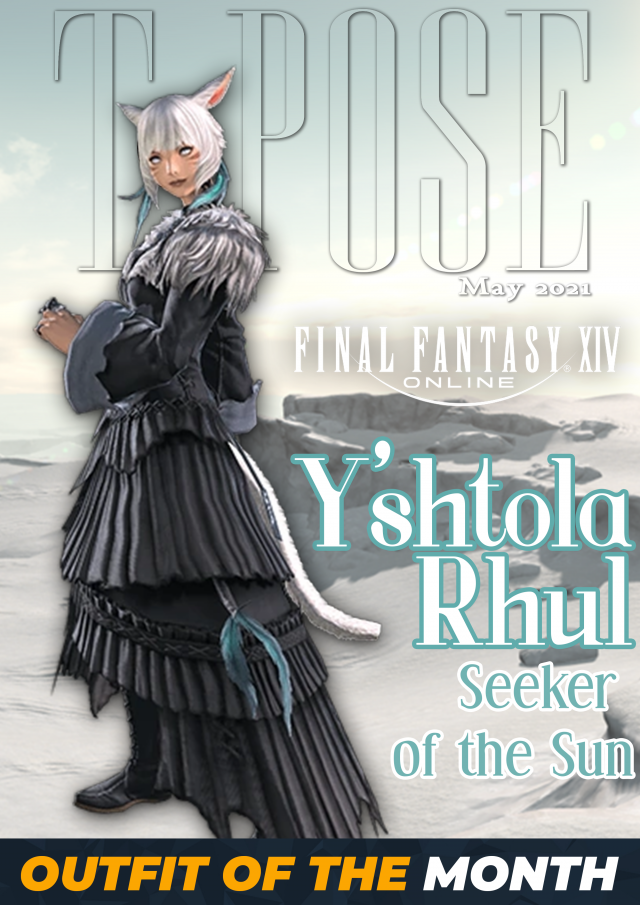 Read the full “T-Pose: Outfit of the Month” series
First