On the trail of two CIA agents, Sam had narrowly managed to reach the grounds of a police station which a third agent was trying to reach before he was assassinated…

Nobody was around, so I made my way down some steps to the basement door. I had found the code on the dead agent’s PC, so tapped that in and entered. Unfortunately, given the amount of ammo I had wasted up to that point, I only had a few rounds left. The guard who was walking past the cells in front of me entered his office and spotted me through the window, so I had to shoot him.

With him hidden, I continued around and found a technician in the next office. I say technician, but he looked like an awful parody of a geek -- his t-shirt had Space Invaders on it, and he was literally wearing a laptop like a necklace pendant. I interrogated him and was told the corpses of the two CIA agents were in the morgue, which was the room attached to the one we were in. I went inside and there was a camera watching the bodies, so I hid behind a curtain until it was facing away, then quickly approached the bodies and ran back to the door while Sam spoke to Colonel Lambert. 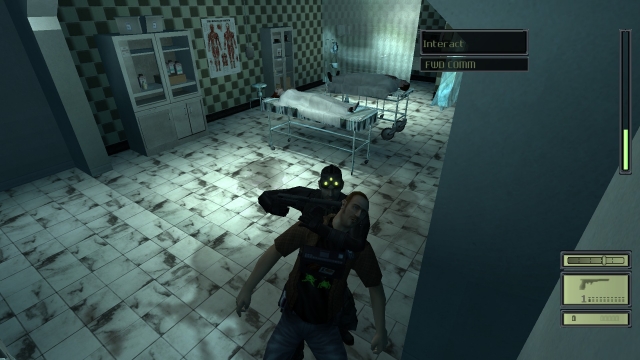 To be fair, the guy was armed with a Nokia (under Sam's elbow) as well as his laptop pendant

The subdermal implants were removed from the agents, so those were now the priority. I was tasked with finding where the security cameras were recorded, to get the ID of whomever took the implants. A short trip later, I was in the room. I took out the guard and sent the footage to Third Echelon HQ.

My final task, while they worked on the footage, was to get to the front door and jump into the escape vehicle! Which was simple, given it was down the stairs I had climbed to get to the security room. I was out in under a minute, mission complete. 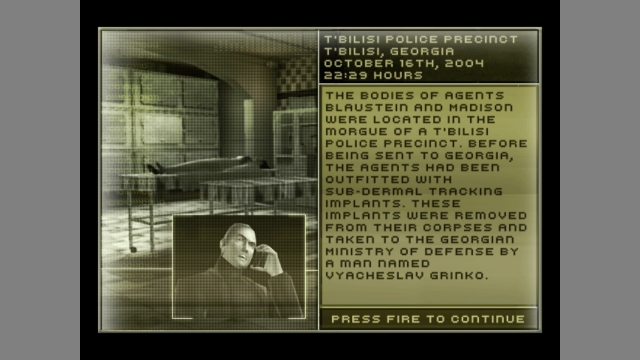 The man who made off with the implants, Vyacheslav Grinko, was tracked to his car, and that was found at the Georgian defence ministry, so Sam went straight over. Somehow winding up on the roof, he found that the courtyard below had a network of laser wires covering it. I rappelled down a few floors and in through an open window. I exited the room and almost got spotted by a couple of guards in the hallway, though luckily the door hid me.

I waited for them to be facing away, then quickly walked into the shadows, and through a door to the left. I went down a few flights of stairs to a parking garage, avoiding cameras the whole way. I found the driver of the car -- just the driver, not Grinko -- relieving himself against the wall. I grabbed him and interrogated him, before returning through the garage, up the stairs to the hallway where I took out the one remaining guard. The other one had gone downstairs for a smoke, and I had thrown a bottle to get him away from the door. 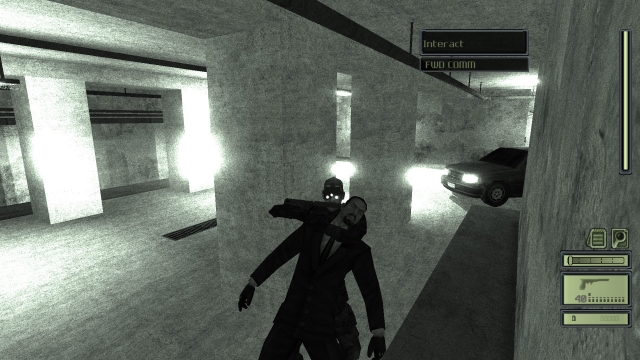 There was a camera inside the office, above the door, so I shot it to enable me to check out the computers, turning off the security laser grid, and pick the lock on the other door which led to the balcony. As I came out, a cook opened a nearby window. The driver had revealed that Grinko was meeting with Philip Mass (some computer guy) in the elevator, so I had to listen in on that meet. I was packing a laser microphone, which detect vibrations and translates it to sound, so it was imperative I reached a position to see the elevator.

I went in through the kitchen, and into the canteen where a guard kept coming in and out of the room to turn the light on and off. I shot him in the head and hid him behind the serving trays, then went down the nearby stairs. I was now in the reception area, luckily at night so with a limited number of guards.

I took out another guard and hid him in a corner, then carefully went down to take out the two near the reception desk. I dragged them both into a dark area, then used the reception computer to summon a colonel to open the back door, which was locked with a retinal scanner. I ran upstairs, but he heard me and was alerted when he came down. Luckily I had managed to remain hidden, and grabbed him. I dragged him downstairs at gunpoint and made him open the door before knocking him out.

Outside, the meeting was about to start. I grabbed my laser mic and followed the elevator as it made its slow way up to the top floor. Once it was there, three guards came out of one of the buildings into the courtyard. I may have initiated a brief firefight resulting in three dead guards, but I won’t confirm that… 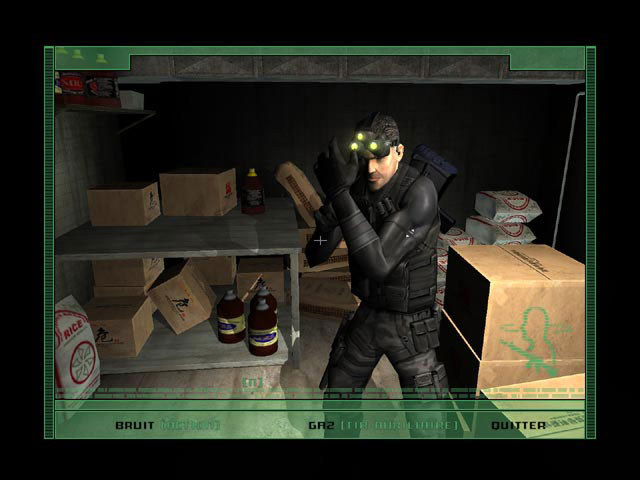 I ran over to the building they came from and climbed up the trellis and into the open window. Dropping down inside, the numbers on the elevator started counting down -- company was on its way. I stood to the side and got my gun ready, four shots taking the two guards out quickly. I went inside and up to the top floor.

There was a camera off to the side, which I shot, but while I was trying to pick the lock on the nearby office a guard came out of the door to the end, surprising me. I shot him a few times, but the door he came out of was locked with a keypad, and I didn’t have the code. I dragged him into the office and saw an opening in the ventilation system above the desk.

Once up in the vents, one direction led to a break room full of guards, and the other dropped into the hallway which the keypad door led into. I dropped down and shot the camera at the other end. The door closest to me was blocked, so I went to the next one which turned out to be a cupboard with a ladder to the roof.

I went up and had a look around, finding a post which I could rappel from. I went down to the office window where there was a guard stood at a file cabinet. I got my gun out and shot him, smashing the window and landing in front of Nikoladze’s computer. I started accessing it, tripping an alarm. In short order, the comms chatter revealed that three guards were about to breach the office, so I took cover and took aim. 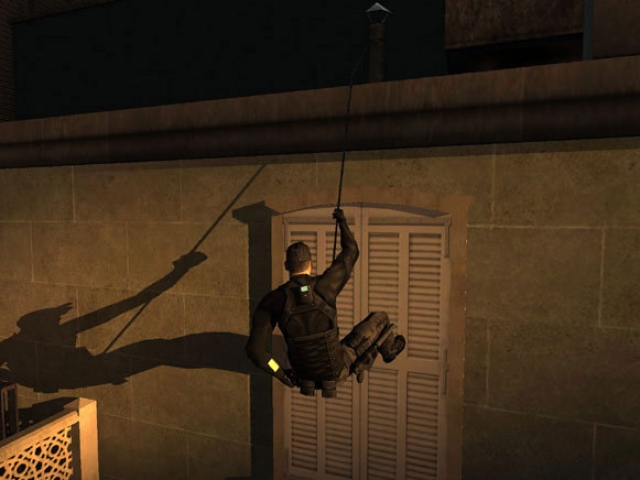 The door opened and I quickly blasted all three, them not getting a chance to return fire due to the darkness of the office. The transfer from the computer finished and I left through the now-open door. Vernon Wilkes was in the parking garage, so I had to meet him there. I avoided a guard in the hallway, thankfully having already destroyed that camera. The previously blocked door was wide open, so I went out.

The comms went off -- they had swept the office and were heading for the gangway. I was stood on the gangway.

I broke into a sprint and rounded a corner, leaping out and grabbing onto an elevator cable. Sliding down to the garage level, I hopped off and managed to avoid the cameras, going to Wilkes. The response to my accessing the computer was bigger than Sam or Wilkes thought it would be. Wilkes said that, from chatter coming out of Third Echelon, we were at war...