This is my ongoing exploration of the Tom Clancy’s Splinter Cell games, played in release order. I will chronicle my playthrough of each title in turn and discuss any recurring themes and noteworthy events. This time I continue Essentials.

Sam had managed to escape from captivity, and had relayed the facts of his undercover mission to Grímstóttir and Redding, who knew he was being set up. However, he had just admitted that he was guilty of murdering Colonel Lambert…

Sam flashed back to the Delta Atlantic Warehouse in New Orleans, in December 2008. According to the brief, Moss had a recording that would blow my cover, so I had to take whatever measures I could to maintain my cover.

Walking in like they knew me, I went past a couple of people and talked to them - including a guy in the bathroom who said “it burns”... I found Moss’ office and went in, hacking his computer and fiddling with the voice sample. It took quite a bit of time, but I figured it out before Moss came in, and took the laptop while I hid behind a cabinet. Then Dufraisne called me to the briefing room over the intercom.

There, tied to a chair, was Lambert with Dufraisne working him over. Moss was stood by the table with his laptop, and played the audio, revealing that Dave was the agent inside the organisation, and Lambert was his support. Shrugging off the incorrect information he had been given by Moss, Dufraisne told me to kill Lambert. I took out my gun and shot the colonel in the face.

Redding and Grim seemed nonplussed at the admission of guilt, and plotted to get the CD back. Sam would have to break into the NSA’s headquarters to retrieve it from Agent Williams, and exonerate himself.

Sam found his way into the building, but the room he was holed up in was breached moments after I got into a ventilation shaft. I dropped into the next office and leapt out of the window, dropping onto a glass-roofed walkway. Down and back inside the building, I went to the left to find two assault rifle-wielding guards chatting. They both remained in position, so I went back to the right and through another open ventilation shaft. 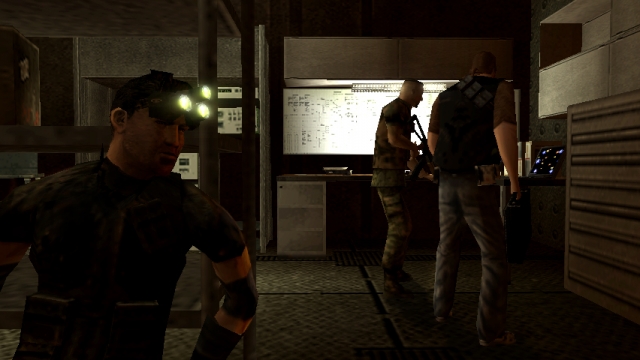 That opened into a delivery bay, but the door out of it was locked. So I climbed a pipe into the lobby and dropped onto the roof of a security office. I had no weapons, so I waited for the three guards to finish chatting before plonking myself down onto the one who entered the office. I quickly leapt back up, in time to avoid being spotted by the second guard, so landed on him, too. I grabbed a radio and got back onto my perch as Grim explained what to do, the first thing of which was to go back into the delivery bay.

A civilian had entered by now, so I went through the door he had opened for me. Following the hall led to some stairs, which in turn opened to a circular hallway. I followed a guard and as Grim told me to find an alternate route, given that there were sentries posted outside Williams’ office, I opened and dropped into a hatch. I followed the ventilation shaft which led to beneath some stairs, so I went up them and into the server room on the left.

Two guards patrolled the area, so I leaped over the railing and to the bottom floor. I turned off the lights, but while I waited for one of them to come down and turn them back on, the lights flicked on without one coming down. I turned them back off, and the two seemed content with that, so I slipped back upstairs and out into the hallway. Unfortunately, the elevator required a fingerprint, so I had to hide on top of the lift whilst two men got inside and told it to go up. Luckily they chatted about how awesome I was on the way.

They left the elevator, and I followed them. According to Grim, there were a lot of guards in the area, but also Williams’ office. I thought she had said it was in that circular hallway, but nevermind. I snuck through an office with one sitting and one patrolling guard, then cut through a conference room to avoid another one. I nipped through the hallways, and had to quickly go into a bathroom to climb inside a ventilation duct, to avoid goons to the front and back of me.

The shaft opened into the circular hallway, showing that I had taken one hell of a detour, and I finally managed to get into the right hallway by sneaking past two more guards. Unfortunately, contact with Grim was lost, but not before she mentioned a ladder. There were three men guarding Williams’ office, so I walked on by, and into a room with roof access. Once up there, I rappelled into the office and accessed Williams’ laptop, taking back the CD he could have snapped very easily hours ago. Sam contacted Williams to taunt him, and said that if he wanted to find him again, he just had to keep looking over his shoulder…

If I never hear someone whistling that same damn tune again, it will be too soon. By far the sound effects were the worst part of this game, and I readily admit that I didn’t have a ton of fun with it. 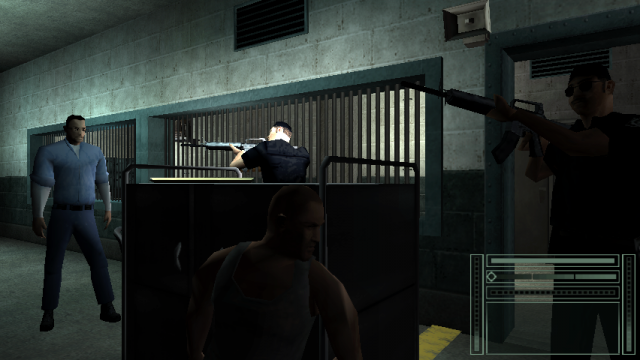 This section took me seven attempts!

Essentials throws the entire timeline of events into whack, given that it seems based on one version of Double Agent not the other, and pretty much negates you having a choice in Lambert’s death. In my playthrough, you might remember me leaving him alive in New York, yet had no choice but to kill him in Louisiana… I’m not big on American geography, but even I know those two places are not the same.

Another thing were the sound effects - for instance, Sam crouched and sneaking along had the sound effect I would expect to hear when a giant robot walks. Any phone that appeared in a room would ring incessantly. At least twice every level, I heard someone whistle the exact same tune. It was very annoying, especially when having to redo sections over and over again.

With the camera being bound to the same stick as movement (plus holding circle), it was really challenging. Plus no quick save meant that I had to spend about five minutes in total just trying to save the game. It’s incredibly difficult to creep up behind someone and grab them. I managed it less than five times, and yet even in Double Agent I had a 70% success rate - and that game practically didn’t even allow you to do it!

The new missions are definitely the highlight of the game. They are large and challenging, and seem better put together since you don’t just skip bits because the team didn’t want to/couldn’t remake them. However, they are very linear, which is a disappointing step backwards, given how the other titles opened things up.

There are three bonus levels, but I have no desire to play through them. They are more of the remade levels, and probably full of whistling, so I’d much rather get a start on the next game. So that’s what I’ll do: join me next time for Splinter Cell Conviction.