Having met up with Norman Soth and hacked his laptop, Sam was on his way to the black market in Israel…

According to Colonel Lambert, there would be few civilians on the streets during my time on the ground due to a curfew being enacted through Jerusalem. Despite working with the locals, that didn’t mean I would be unopposed -- of course, I had a No Kill order…

My first task was to go and get my SC 20k -- it was being modified by a local, which was why I didn’t have it with me. I had to make contact with the guy, Saul Berkovitz, and get the gun. At the top of the slope ahead of me was one guy patrolling, so he was easily avoided. However, there was another at the other end of the street, so I had to be careful as I ducked in and out of lit areas. 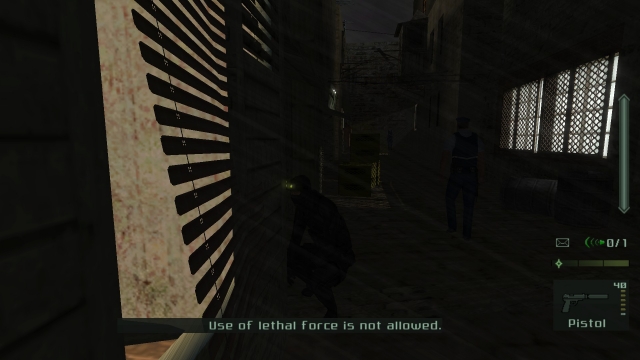 I know, useless closed caption! I won't kill them!

The next area had one policeman, but two civilians. Unfortunately, one of them spotted me and I had to hide and throw a bottle to distract the cop. I had to shoot out some lights as I continued on, but managed to avoid any close calls. I went into Saul’s shop and heard voices. I didn’t know what to do -- I was still under the No Kill order after all -- but I snuck in and saw two men holding another man at gunpoint and threatening him.

I grabbed one of them and it alerted the other, who grabbed the innocent. I quickly took aim and shot the gunman in the head, before knocking out the one I was holding. The survivor was Saul, and he thanked me, but said that he now owed me more than my rifle. However, that’s all he gave me as he revealed where he had hidden it. I spoke to him again, and he offered to show me how to use the SC 20k. 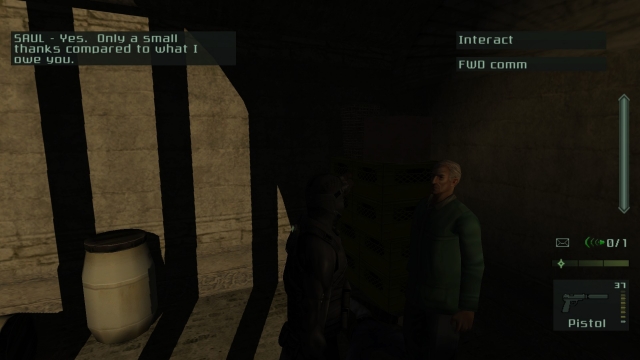 Too bad I had to meet him, otherwise I'd have been like "Better Call Saul"! Nothing...?

Saul left, and I followed -- managing to avoid the two cops along the way -- and he told me the basics of the weapon. I was pretty sure I had used it before now, but anyway… We parted ways after I knocked out a cop that he told me to (for some reason), and I went off to find Dahlia Tal, who had apparently been in contact with Soth during his visit. 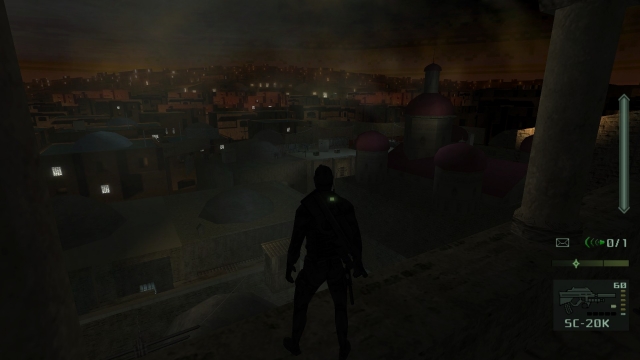 I'm honestly impressed with that view

I went back the way I had come, and knocked out the cop patrolling the area before heading down a hill. There were multiple large lights hung across the street, so I shot them all out and made my way down. One civilian passed by, before I reached the bottom and I had to climb a building. Well, I climbed a pipe and entered through a window and out of the next window -- so I kinda climbed a building. In either case, I avoided the police only for them to wander off anyway.

I went down the street and avoided the three cops, taking them down one by one so that they wouldn’t get in my way. The church where I was supposed to meet Dahlia was ahead, with a cop patrolling the square. I knocked him out before scaling the church up a drainpipe. The bells began to chime as I hopped onto a zipwire, taking me over to some scaffolding. I rappelled down to meet Dahlia, who was stood beside the fence surrounding the scaffold. 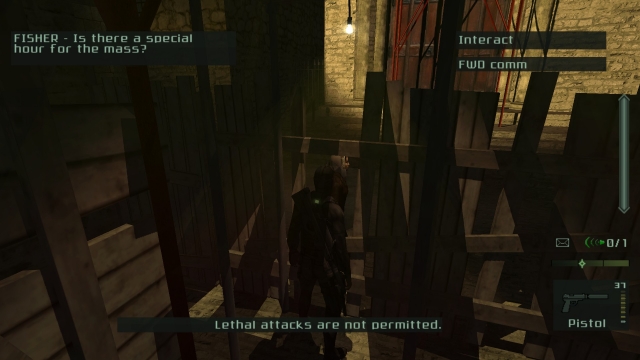 I love a good code phrase

Sam had a brief chat with her before she agreed to let him follow her from the shadows. If the two were seen together, it would look suspicious. She wandered off, and I followed, sticking to the dark. There were a couple of civilians chatting and a policeman patrolling the street, so I had to be careful -- luckily Dahlia waited for me when she got too far ahead.

It was fairly slow going, having to wait for police to move, or for civilians to stop looking my way, but it became entertaining when Dahlia kneed a cop in the groin before knocking him out, after he insisted on walking her home. She was taking me to the warehouse which housed the chemical weapon that Soth wanted, so her going home would have put a crimp in that.

Eventually we reached a large open area, and she told me to go up and over the warehouse to one side. The area was crawling with police, so I saw the logic in that plan, and went around the building and up a drainpipe. I went around the roof and then rappelled down the other side, away from the police. I waited for Dahlia to catch up, and as she passed me she was accosted by another cop. Unsure whether she would take care of him or not, I bashed him and moved him into the shadows. 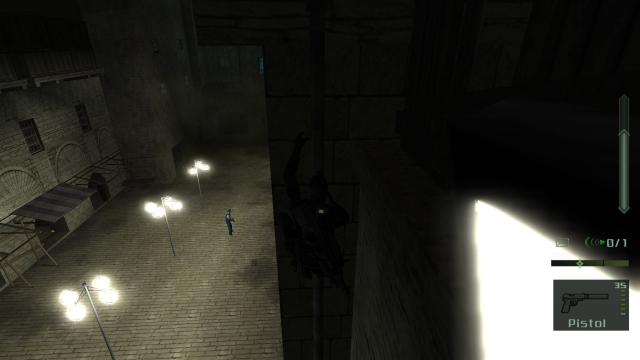 Sam 'Good Thing I'm Not Afraid of Heights' Fisher, everyone

Dahlia entered a gate and I followed -- this was apparently the place. She opened a secret door that revealed an elevator, which she told me I had to go down alone. As the car began to move, Lambert urgently told me to shoot Dahlia and not ask questions. Always willing to obey the voices in my head I shot her, but it deflected off of the chainlink fence, and I didn’t have the chance to fire again before she left my line of sight. Lambert berated me, making me feel bad as I descended into the facility.

Lambert finally stopped complaining long enough to give me the go-ahead to kill anyone I met from now on, so I got my SC 20k ready. There was someone stood right outside the elevator, so I shot him skillfully in the head. Someone noticed and I shot him quickly before he could take aim at me. I carefully left the elevator and rounded the corner, narrowly avoiding some bullets before I took down the third man.

I had to sneak around, because every couple of corners had another few mercenaries. I found an armoury and took out the two guarding it before stocking up on ammo and grenades. I moved on to the main room, which happened to have about eight men guarding it, resulting in a huge firefight. 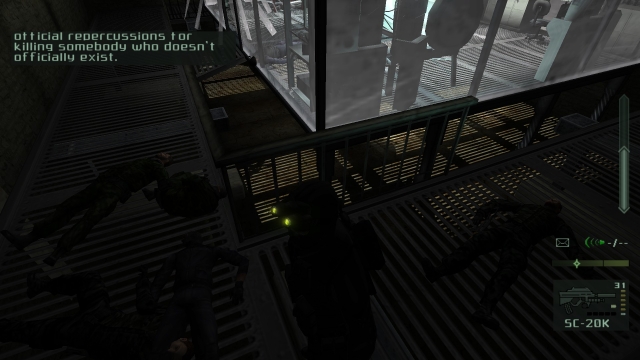 It ended with grenades, smoke and bullets (and bodies), and me being successful. I collected the sample from the lab, and Lambert told me to get out. However, since I failed to kill Dahlia, Lambert warned that she was planning on killing me with her “sniper skills that could debunk the Kennedy assassination”. I entered the elevator and headed for the surface.

Exiting into an alleyway, bullets began peppering the ground around me. I ducked behind some barrels and put on my night vision goggles to find Dahlia and some bloke sniping me from a fire escape several floors up. I took them out with my SC 20k, and carefully checked out a scaffold around the corner. Good thing too, as there was a third sniper up there. I shot him and went to the extraction point.

Whilst Third Echelon was testing the sample I had retrieved, to check whether it was really smallpox or not, they had arranged for the residents of Springfield, Texas to receive inoculation against the disease. According to intel, Suhadi Sadono (a name I haven’t had reason to type since the first part of these diaries) had a contact in America that he would contact regularly to delay the attack. My next mission was to intercept Sodano’s call in Kundang, Indonesia...