Coen dropped me off on the roof of a building close to the TV station Sadono had holed up in. I had to make my way to the actual station myself, by sneaking through the rain and avoiding who I could. Of course, I was weapons free, so I was avoiding with a liberal dose of murdering.

When the TV station was in view, lightning began peppering the sky -- and illuminating me. I managed to hide whilst overhearing the enemy talk on comms about how the snipers didn’t have night vision, due to the lightning. I took the hint, and tried not to use my own as I took down two men, then shot a bunch of light fixtures. There was an auto turret guarding the only route in, after all.

Past the turret, there was a guard room with a clear view of me when the lightning struck, and two guards making rounds. Luckily I managed to clobber them both in between bolts, and snuck around to where another one was stood with a van. I grabbed him and dumped him in the shadows, where I noticed an open manhole.

Once down the ladder, I snuck around the sewers and took out two more guards, unfortunately causing an alert in the process. Up the next ladder, there were two spotlights and a buttload of mines literally the ground, only seeable using thermal goggles. I managed to sneak around by using the huge satellite dishes and junction boxes for cover, and climbed over a fence to a locked door.

The lock picked, I was behind the guard room and shot the man inside, unfortunately causing another alert. I took out the two who came to attack, then left the room carefully. There was another auto turret guarding the entrance, so I decided to see what I could find on the roof. 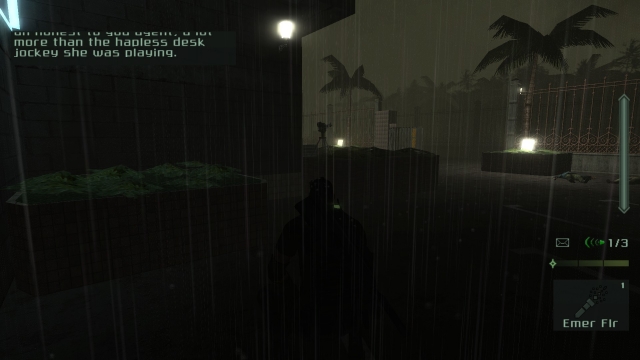 After a short climb, I found that a satellite dish had been knocked off of its fixture, and fractured a window. I shot out the window and used the fixture to rappel down inside. There was a sole guard, who I shot and hid before travelling up the elevator.

Colonel Lambert told me that, Sadono still had Ingrid Karlthson (last seen in Part One), who had maintained her cover, and was still translating things for him. I waited for two guards to turn their backs, then went through a door to follow one. The only other two routes available were guarded by auto turrets, so a clear no-go. Rather than continue following, I wall-jumped up into a ventilation duct and snuck into a broadcasting studio. There were three guards, so I had to bide my time and wait for them to gather in one place, before smoke grenading them. It missed one, so I quickly gunned him down before he sounded another alert.

Sneaking a look with my optical cable, I saw a guard head into one of the recording studios, and start talking to a woman. Since the only women I’d met thus far were Coen and Ingrid, I felt safe saying it was her. While I waited for the guard to come out, I checked the other recording studio next door, and saw another guard sat watching Ingrid. So I shot him before going back to shoot the other one. 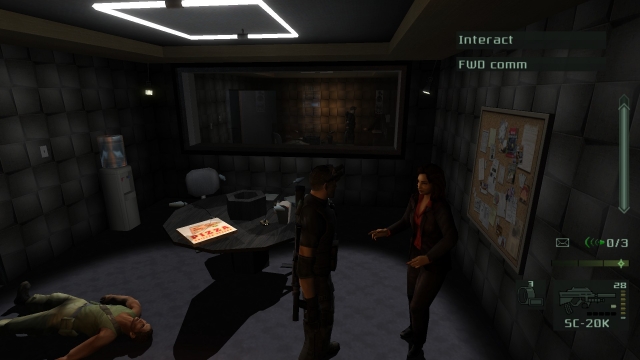 At least they were feeding her well

Ingrid explained that she had security clearance, and would happily let me in to find Sadono. I followed, shooting a couple of guards on our way back to the elevators. Across from them was the retina scanner, and she told me to follow along the left walkway whilst she took the right.

She met a new guard along the way, and he stopped her to check her identity. Moments after Anna Grímstóttir contacted me to warn that her cover was blown, the guard got a call of his own. I shot him, then shot the one behind him. Three more came in through the retina-locked doors and I threw a grenade at them before returning to Ingrid.

Thanking me, she headed for the scanner and opened the doors, telling me to meet her on the roof where an escape helicopter would be. I slipped past a security camera and shot a guard, though that did alert his mate who took a few shots at me before I killed him. There was another retina scanner, but since I hadn’t failed I figured there must be another way in. Luckily there was a post leading up to a shelf, which let me into a ventilation shaft.

Finally in the studio where Sadono was, I silently dropped down while he prepared to record a speech. There were more guards than I could take in a firefight, so I figured I’d chance using my one flasbang. It went off, blinding everyone and I rushed in to grab Sadono. With a gun to his head, his men kept from shooting at us -- well, kept from shooting me, as they still kept shooting around us now and then.

I made Sadono open the retina lock, then walked him up the ramp with his men following us to the next retina scanner. Outside, Ingrid decided now was the perfect time to have a chat, so that’s what they did for three minutes before finally boarding the helicopter. 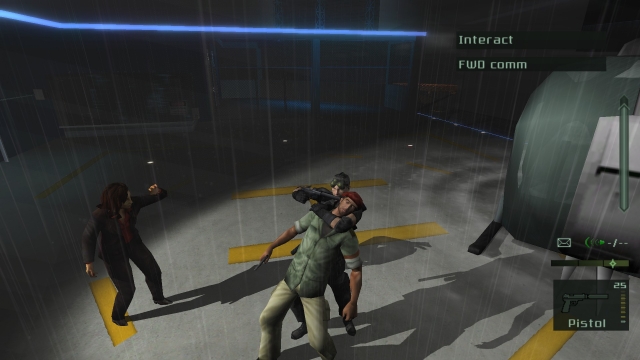 There are three men with guns aimed at us just behind her...

Unfortunately, Norman Soth apparently still had one of the bio weapons, and had taken Los Angeles International airport LAX hostage with a bunch of mercenaries...