The 5 Most Cheerful Games

Scared of the Dark? Terrified of tarantulas? Despise thin men in suits? It’s safe to say that horror gaming isn’t for everyone. In fact, aside from the occasional dare, few people really dabble with scary games. As if horror movies weren’t bad enough, titles like Slender, SCP Containment Breach and Silent Hill force players to experience shocks and scares only possible from an interactive medium. For those who prefer hugs and kisses over stalkings and screamings, Halloween is typically a pretty unpleasant affair. So what better time to take a look at some of the most calming, peaceful and cheerful games available right now. Snuggle up in bed, grab your collection of teddy bears and put on some whale sounds, let’s chill out and dig in. What’s the polar opposite of spooky mansions, crazy killers and hundreds of zombies? Flowers, of course. Thatgamecompany’s second outing, the serenely named Flower, is perhaps the ideal title for a calm and relaxing evening of gaming. Playing as the wind, you guide a single flower petal on a journey through beautiful vistas and open fields, picking up a stream of petals as you artfully bring life to the world. What could be more peaceful? I mean, the whole point of this game is to allow the player to experience “positive emotions”, and that’s directly from designer Jenova Chen. Certainly the best place to start; you won’t see any flower costumes come Halloween. 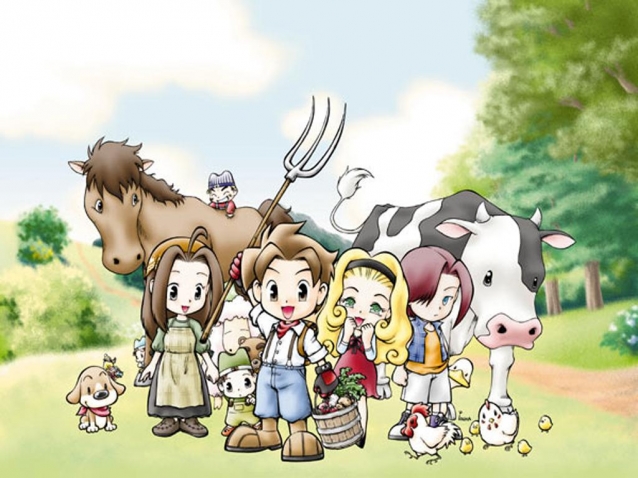 We’ll let you freestyle with this one. There are a fair few Harvest Moon games to choose from across a variety of platforms, so you can go for what’ll best keep the demons out for you. Setting up a farm and building it into a paradise of cornfields and corned beef is by far one of the most chilled experiences in gaming. Just, whatever you do, try not to create any kind of mental link between this and the millions of crop row alien movies you’ve seen, this isn’t like those. Or that episode of Doctor Who with the freaky scarecrows. Or the countless horror flicks that take place on farms. In fact, maybe you should stay away from this one, after all, unless you don’t have any fearful inclinations towards those things. How about something both visually cheerful and mentally challenging? Something to take your mind off those devilsome trick or treaters. Ibb and Obb is a recent platform puzzler that’s only really playable with a friend, which, thankfully, is the best way to endure Halloween; in the arms of an equally terrified individual. Well with this great little indie title you can try your hand at some cleverly designed platforming fun whilst enjoying the funky soundtrack and cutesy art style. It’s undoubtedly one of the least scary new games out there. Of course, you should choose your gaming partner carefully; you don’t want them to become enraged by the trickier parts of the game and go on a killing spree. That wouldn’t be peaceful at all. Let’s face it, Thatgamecompany make a lot of relaxing games; it’s largely due to the lack of focused objectives that characterise their titles. Arguably their best game to date, the co-op exploration game Journey, is a great method to turn that frown upside down. While other people celebrate human emotions like anger, hate and betrayal, you can develop a wholesome connection with an online stranger (but not the danger kind). With this unlikely acquaintance you can explore a visually and emotionally stimulating world that’s often noted as one of the most unusually beautiful and serene landscapes in gaming. So when your friends tell you about the ‘blood fountain’ or ‘weeping angel cosplay’ you can snap back at them with your tale of two adventurers subtly bonding in a mystical world. That’ll show ‘em. You know where Halloween doesn’t exist? The ocean. No creepy costumes out there. It also so happens to be a great place to relax and forget about your woes. Endless Ocean, an exploration title for the Wii, is an ideal game to play this Halloween. You take control of a diver and are tasked with finding hidden treasure and taking photos of the wildlife “under the sea” (that’s right think of that jolly song). There are some beautiful creatures to see including Dolphins, Whales and a host of crustaceans. There are also some sting rays, but we’re assured that they’re not the deadly type. In fact, even the in-game sharks pose no threat to the player! Perfect! Just make sure you don’t pick up the sequel, it has “adventure” in the title. Definitely don’t want that nonsense.

We hope that’ll you get through the night. Just board the windows up, lock the doors, jump in your onesie and play through them all in a super-duper session of relaxation. Let’s not be scared this Halloween season, let’s play some games and let those tackily dressed children have their ‘fun’. They’re the ones who’ll grow up to be psychopaths.