Horror Games Don’t Scare Me, And It Sucks.

We have a writer here who goes by the name of Ace, he’s just written an article about why he can’t play horror games. They scare him silly. I on the other hand have the opposite problem.

I've been an avid consumer of horror in all its forms since I got scared silly by It Came From Outer Space at age 8. Sadly, that was the last thing that really scared me!

I'm not kidding, really. Alien? I was rooting for the Xenomorph when I first saw it at far too young an age right until I fell asleep just after Jones the cat got Harry Dean Stanton killed. The Blair Witch Project? Snoozefest. Paranormal Activity? I fell asleep while my wife and stepdaughter hid behind cushions. Even the original Japanese Ringu trilogy didn't do much if anything. I see scarier things in Plymouth on a Wednesday afternoon.

As for horror games, the Resident Evil series I loved for the plot and the gameplay, but were about as scary as Sunday school. The much vaunted F.E.A.R series were a total letdown on the scares front, but again: great story, great games. I really identified with Alma and thought she'd really had a rough deal. 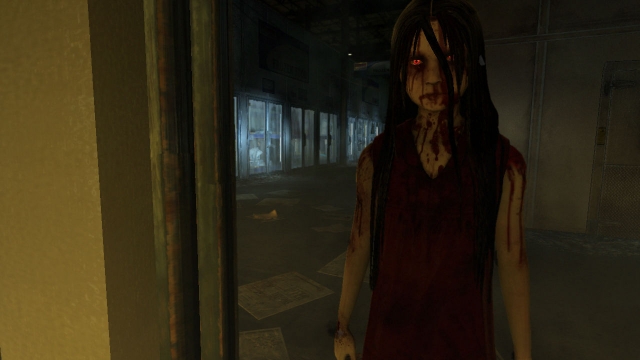 Alma “I’m dead as hell and I'm not going to take it anymore!” Wade

I'm constantly on the hunt for something to get my pulse racing and make me want to hit the power button on the PC or console and go whimper in a corner, alas I have yet to find anything.

Even the Zombie Clowns in Left For Dead 2 didn't do it! Zombie Clowns for crying out loud! Two things guaranteed to get most people running for the hills in pants-wetting hysterics and all I thought was “Eat frying pan ya red-nosed squeaky-footed balding bugger!” 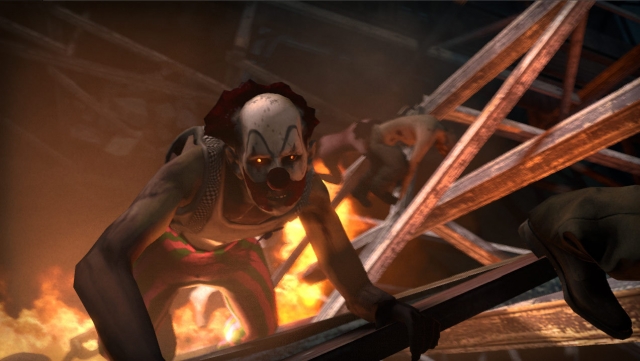 Zombie Clowns, annoying as all hell… but not scary

As immersion in games improves thanks to higher fidelity in graphics, sound and better plotlines, I hope I will one day meet a game that can cause the same shudders of otherworldly terror that reading H.P Lovecraft as a child or watching Tom Baker era Doctor Who did once upon a time.

Until then, I shall continue to play horror games in the dark, with headphones and my back to a door in the vain hope that sometime soon my hackles will rise, my flesh will creep, and I’ll squeal like PewDiePie playing Outlast.

In defence of my cohort Mr Duncan, I should point out that I have one fatal flaw when it comes to games and films. Where he may indeed be a big girly man when it comes to horror games, I turn to a six foot, long-haired puddle of goo at a good tear-jerker.

Horror Games Don’t Scare Me, And It Sucks.

Left 4 Dead 2 is Free for Today Only!

I can totally feel you. When I was a kid I remember playing resident evil 3 with my brother back when I was 7 and since it was my very first horror game ever it actually scared me so much. I remember I had to have much guts to play it myself and fix ally finished, then I finished one time two times and so on and it became a routine for me to look for more scary games yet, it's like I gained immunity to these games. Any game was able to scare me anymore. I enjoyed so many scary games but I so miss the feeling I had then opening a door and feel actually scared of what it was behind, because it totally disappeared. I play horror games and still find then attractive as long and the storyline and plot is good enough to keep me hooked but, sadly, i don't get scared anymore. I was currently playing deadspace because many people said it was scary but I found myself walking thought the hall infested of monsters jumping over you and I'm like "so it's suppose this have to scare me?" so I just continue walking like of nothing happen and I can't feel any sense of suspense at all. Same happens with whatever survival horror game I play nowadays.