Persona 3 was arguably the game that made me appreciate JRPGs again. Lisa: The Painful and Earthbound both helped in more minor ways, but whilst I eventually trailed off on completing both, Persona 3’s story and characters kept me hooked the whole way. I hadn’t really felt that attached to a game’s cast to that degree before, and it made me understand what people loved about the JRPG format. The long form meant you had a very significant portion of time to get to know your party members and to invest yourself in the world and story. It was a great revelation, it felt like finally solving a puzzle that you’d been stuck on for weeks.

Perhaps putting Persona 4: Golden’s predecessor on such a high pedestal was a mistake, because my initial first impression of the game was something of disappointment. The game doesn’t do itself any favours, in my defence, because Persona 4: Golden’s graphics and layout are almost identical to Persona 3. This brought familiarity to my first five or so hours into the game, but also inevitable comparisons to the game I already loved. Yosuke felt like Junpei, but with a different voice, and even more obnoxiously perverted. The soundtrack was good, but it didn’t hit me the same as Shoji Meguro’s previous work in Persona 3. Inaba, whilst eerily paralleling my own real life transition to having to go to school in a completely different small town where there’s very little to do, just didn’t have the cosy midnight vibe that Gekkoukan High and Tatsumi Port Island carried. It kneecapped itself by being so familiar, because I was still aching after finishing what is now one of my favourite games of all time.

So, it sat, occasionally picked up but inevitably dropped again. I didn’t get very far, and I moved on to greener pastures for a while. It was only when my friend played through the series that my interest was piqued again. Countless others had praised the game prior, and I always feel bad leaving unfinished games to sit. It had been about a year or so since I’d finished Persona 3, so my mind was a little more fresh of expectations. I decided to visit Inaba a second time. 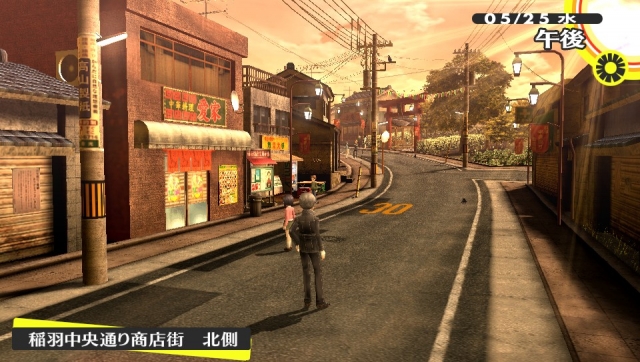 Something nice that comes from playing the Persona series in release order is that you get to experience the quality of life they gradually add in with the new releases. Persona 4: Golden improves almost universally on the core gameplay elements of Persona 3, at least mechanically. Grinding is never really a necessity, for example, as going through each floor of the dungeon is usually enough to net you enough XP to be able to fight the dungeon boss at the end. Fusing Personas is far more intuitive, as the game gives you blueprints for the higher level ones, sort of like a demon shopping list. Shuffle Time’s a lot easier to get what you actually want, since it’s now choosing from a list as opposed to picking from a literally shuffled deck. Social Links are now far more beneficial to invest in, as the counterparts to the Awakened Personas that the cast of Persona 3 eventually touted are now earned by spending enough time with your party members. You also gain more abilities for the party’s various Personas as well, when you spend time with them.

And, of course, you can actually choose to control your party members in Persona 4: Golden, as opposed to the vague directions that you’d give in the PlayStation 2 version of Persona 3. This particular point didn’t affect my impression quite as heavily as others, though, as my first playthrough of Persona 3 was the PSP version, which had since revamped this part of the combat. 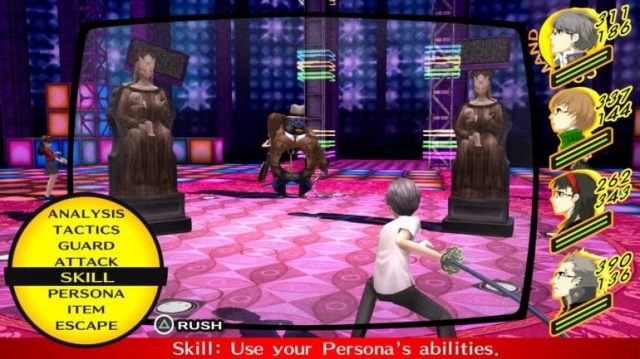 The gameplay loop itself is definitely better here than it is in its predecessor, but the gameplay was never truly why I loved Persona 3 all that much in any case. The atmosphere, plot and characters were. Persona 4: Golden doesn’t quite manage to live up to Persona 3 in this regard, but it does bring some unique and interesting themes and characters to the table, that make its existence more than justified.

Your main party members are arguably less in-depth than their Persona 3 counterparts, but they make up for it with how they interact as a team. The various story events successfully manage to illustrate a believable teenage friend group, and you never get the sense that any of the characters really stick out as being out of place, at least not by the end. Kanji and Naoto steal the show for me, with Chie and Teddie running up. Where the game excels is the delivery of the story itself, which is far less sparse than the previous title. There’s more of an actual plot going on, with story hooks that might actually keep you intrigued in the ongoing mystery. The atmosphere is far more light hearted and optimistic, as well (though I personally prefer the somewhat apocalyptic feel to the later hours of Persona 3). 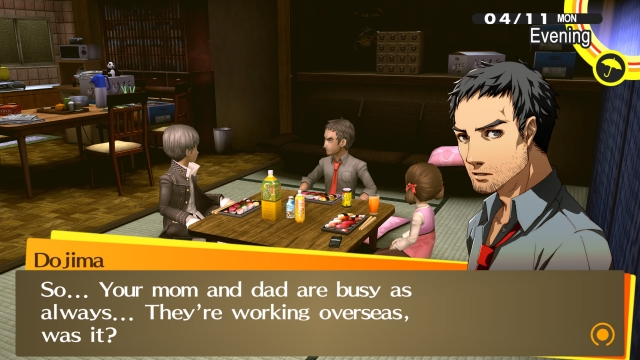 I won’t spoil anything about it, because I believe that it is best played blind, but what I will say is that the multiple endings, regardless of how they fit into the internal themes, are still incredibly frustrating. Being a 70 hour game, the last thing you want to be doing is sifting through previous dialogue to make the right choices, and the linear format for Persona 3 leaves far less of a bad taste in my mouth overall.

As mentioned before, Shoji Meguro composed the soundtrack for both the original Persona 4 and the re-release/expansion that I played, Persona 4: Golden. The vocals for the tracks are now performed by Shihoko Hirata, where Persona 3’s soundtrack was sung mostly by Yumi Kawamura. Lotus Juice is also sadly not present in Persona 4: Golden’s music. The tracks themselves have a very different, more relaxed and fittingly rural vibe to them, though the combat themes kick it into full rock when it is required. You’ll have a hard time understanding the lyrics, but the theming and vibe of the track will come through regardless. Each piece of music was composed perfectly for the right moment or area, and works wonders in connecting you to the small town that you’ll be spending your hours in. This is one of the aspects where Persona 4: Golden lives up to its predecessor, at least in my opinion. The opening intro songs for both the PlayStation 2 version of Persona 4 and Persona 4: Golden are standouts, as well.

I do feel the game tends to drag towards the end, which is definitely not helped by the aforementioned fake out endings. My terrible endurance with videogames might tend to influence this opinion, though. But, overall, I very much enjoyed my time with Persona 4: Golden, and I wholeheartedly recommend it to anyone who feels a supernatural murder mystery JRPG might be up their street.

It might be awhile before I finally get around to Persona 5, though.

So I Tried… Persona 4 Golden 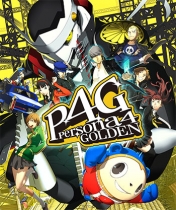