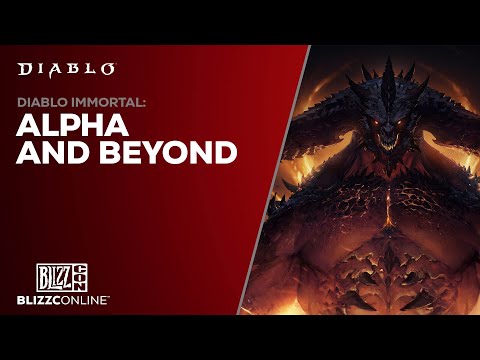 After having a chance to play through the technical alpha for Diablo Immortal, Bluddshed, Diablo content creator, YouTuber, and streamer, sat down with Caleb Arseneaux and Wyatt Cheng, respectively the lead game producer and designer of Immortal, to talk about the Mobile MMORPG's alpha.

One point that came up, again and again, was how the game felt like a "full Diablo game," even in its alpha release. There were a variety of things for the players to do and places to go, including special and unique "zone events" that ranged from protecting a carriage to fighting a shadowy version of your own character to a PVP free-for-all where you can even then, team up with your friends. In this, and every other facet of Immortal's design, Cheng boasts that the team is giving it their all and not delivering poorer work for a mobile game. This, as argued by Bluddshed, can be felt in the cinematics, the soundtrack, the sheer variety, and the skills.

In particular, Bluddshed found that the new interactions between skills were engaging and fun to play with, such as summoning an ice crystal to then cast Ray of Frost on to ricochet off of for greater Area of Effect damage. Cheng here notes that a major concern that the team worked on was in balancing the skills so that players could use not only new skills and improved versions of older abilities, but could also engage with skills that felt comfortable and familiar. In a way, "honouring the Diablo Legacy" while still finding ways to push the series forward.

Another area that the Diablo Immortal team has taken care to get right is in pacing and progression. Considering that Immortal, as an MMORPG, will be planned to have a long lifetime, the Paragon system has been split into several different trees for each class, with plans to add more Paragon trees for further character progression in future updates. This, alongside gear rank-ups, allows for the player to experience consistent "predictable rewards" so that everyone can feel as though they were able to improve their characters in a given play session even if more random rewards don't drop. Further, to both highlight this system and to make each drop of loot more enticing and rewarding, the chance and rate at which legendary items, among others, have been reduced, roughly to the level of Diablo III's vanilla release, according to Bluddshed.

Beyond that, the game offers yet more. Players can spend their time in the main town hub of Westmarch, which features a tavern, explore the zones for hidden layers and dungeons, play through the story content and dungeons alone, or with friends, and even hang out with good ol' Deckard Cain.

As for Diablo Immortal's future directions, the team promises an upcoming additional testing phase that will be more open and available than the technical alpha. This new phase comes with more content and a new class to play with. Furthermore, while there is plenty of endgame content already available in the alpha, the team teases even more endgame in the full release, as well as a starting level cap of 60, which is 15 levels higher than the alpha's cap of 45. Lastly, when asked directly about controller support for the mobile title, Arseneaux and Cheng, while remaining noncommittal, explained that they were exploring options and thinking about bringing said controller support to the game. There's nothing concrete, of course, but it seems there is room to get excited.