This is my ongoing exploration of the Deus Ex Universe, in release order. Whether you’re a newcomer or an old-goer, I hope to make this something you can read along with and enjoy. I continue with Deus Ex: Invisible War.

JC Denton had been successfully revived, and had sent me to Cairo with one objective: rescue his brother Paul…

Having left the facility that JC was in, I made my way back towards the base camp set up by the Templars. I’d already killed everyone, so didn’t worry - until I saw two power-suited Templars guarding the tunnel exit. I shot them with my Mag Rail, and they exploded. The third Templar in the area, and a wandering spiderbot, didn’t react at all to that. Luminon Saman had called me over my comm, telling me to go to Tent 04, so that he could speak to me. I’ve no idea why both he and Billie wanted to use the holocomm instead of just talking over my implants, but I went inside.

Saman explained that he had destroyed Seattle to get rid of the research that had created me. I wasn’t simply a clone of JC Denton; I had been an ordinary human that was genetically altered to be like JC and Paul. Saman went on to say that the Dentons had done exactly what the Illuminati wanted, which was not what he wanted at all. He wanted me to obtain something from Liberty Island for him, whatever it was that JC had constructed. 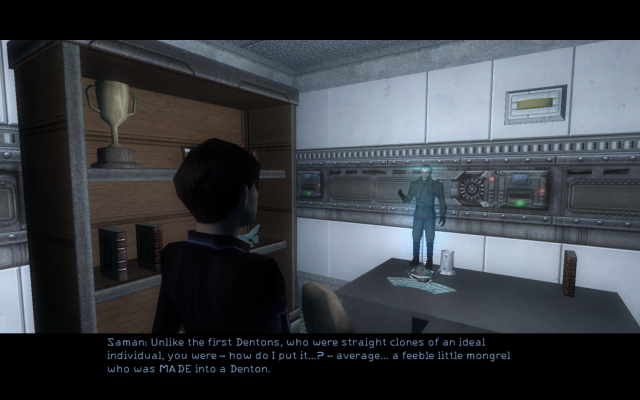 Leaving the tent, I killed the third Templar and ran off ignoring the spiderbot. The Grays could deal with that, I was sure. Heading for the helipad, I was more cautious this time. I activated my biomod that allowed me to see through walls, and kept an eye out for more Templars. However, the way was clear and I arrived at Ava Johnson’s helicopter without issue.

Ava warned me that Cairo wasn’t quite as friendly as when I left it, but assured me that she could ferry me from Antarctica to Cairo, then to Liberty Island. JC was already there “in a manner of speaking”, preparing the Great Advance. Quite what that meant she couldn’t go into detail, as she was programmed by Tracer Tong years ago and that was his terminology, not JC’s.

Landing in Cairo, Ava finally explained that the Templars had taken over, filling the Arcology and mosque, and had moved Paul up to Flight Bay 24, on floor 110. What’s more, they had a bunch of millbots waiting to kill me. 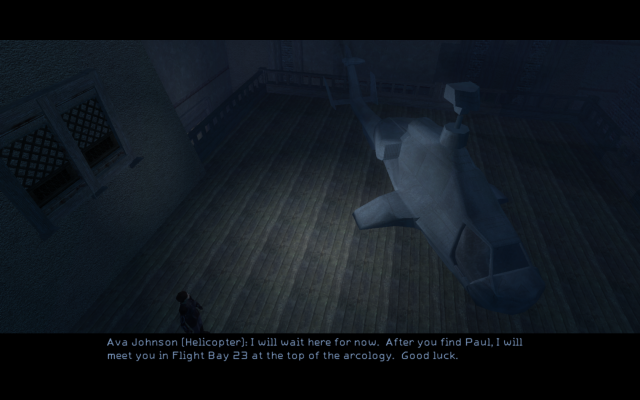 Leaving the helipad, I met Sid Black down at the café. He lamented the fact that nobody here had enough money to pay him to get out of Cairo, but did hope that I would pay him 500 credits to get to Liberty Island. Also in the café was an elite Illuminati commando that Chad Dumier had sent, and told me about via my comm.

Upon speaking to the commando, it became clear that I would have to either help him kill Paul, or kill the commando. I decided to play it safe and claim that I was going to help with his mission, so we split up. I was somehow supposed to make it past Templar forces into the Arcology, then up to the flight bay, all without dying. He was invisible and going to sneak up there…

I decided to head to the mosque, rather than risk an assault at the front door. On the way, I was contacted by Nicolette DuClare, who warned me that enforced modification wasn’t the way to go - and cryptically added that I should ask Leo Jankowski’s thoughts on the subject.

As Leo had been guarding the Omar trader earlier, I swung by to buy some ammo, then headed for the mosque. Outside was Leo, in an Omar suit! He had taken the first step towards becoming an Omar, but was hesitant about taking the second step. The Omar were insisting, and in fact he had been told that they would install the mods the next time he fell asleep, consent or no. So, I loaned him 500 credits to buy passage out of Cairo. I say loan, but Alex D. insisted that he didn’t need to repay the money. In fact, if he could head to Liberty Island and meet me there later, that would be payment enough. 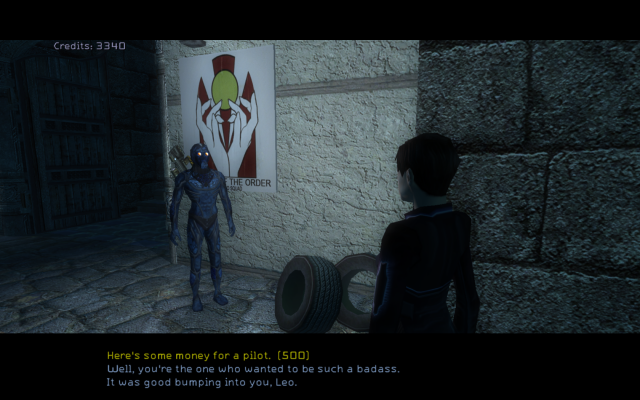 I had a bit of cash tucked away

Speaking of Liberty Island, I swung by a news sphere. According to the weather report, unseasonably cold weather had blanketed Liberty Island. Weird that it would hit the worldwide news, especially when Luminon Saman was also on the news talking about how he had declared war on those who were against the Knights Templar.

Before heading into the mosque, I checked out the one area that I hadn’t been to, where a couple of people were stood with Lin-May Chen. Duclare had put Chen’s mind at ease, apparently having confirmed my lie back in Germany. Chen was tasked with comforting their believers here in Cairo - but not in the Arcology. 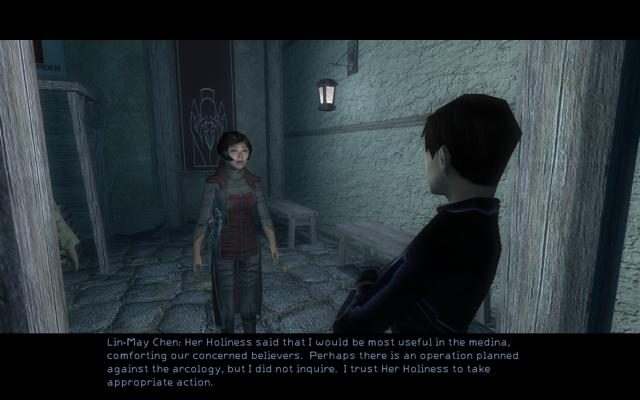 Don't worry, you've not been pushed off to the side

Inside the mosque, I was surprised to find no guard telling me that weapons were not allowed inside. Opening the door, I used my mod to look through the wall and spotted a guard to the right, and a power-suited Templar to the left. I shot the power-suited one first, then the other Templar. Since the power suit had exploded, it drew the attention of a few more Templars, who I shot with my boltcaster.

Avoiding the main area - where the milbot was - I headed downstairs and cleared out the handful of Templars who were terrorising the people in the infirmary. Heading back up, I went into the main area and managed to use my mods to take over the milbot, and power it down. I decided to check out the rest of the area, and came across a couple more Templars, then went upstairs to the office. Two doctors were discussing Paul Denton, oblivious to my being there. I attempted to speak with them, but they were quite snippy so I shot them with neurotoxin. 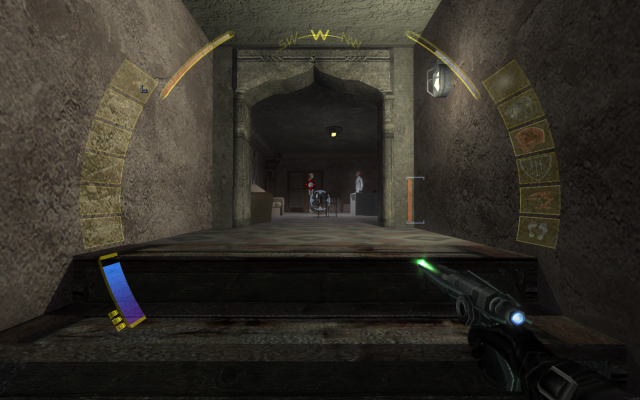 Back in the infirmary, I was thanked by the doctor and a mother that I had helped previously by getting her child into Tarsus Academy. The doctor gave me a medkit, while the woman gave me an access code for the security office in the Arcology. With all of that done, I headed to the elevator and entered the Arcology.

Upon opening the elevator door, a Templar was coming down the ramp towards me. I shot him with the boltcaster, but he was quickly joined by an armoured Templar, so I had to switch weapons to kill them both. Then, rather than go up, I headed down the ramp. At the bottom were two Templars, so I sniped them with my boltcaster before heading down. To the left was the local Pequod’s, with a turret and a couple of Templars, so I tried to sneak behind the bar to find a security terminal.

The turret on the roof immediately spotted me, and I panicked as Templars converged on my position. After some shooting with my Mag Rail, a handful of Templars were dead. I disabled the turret with an EMP shot, then spoke to the NG Resonance hologram. She insisted that I head to Pequod’s and attend her concert, which was happening right this very moment, and wouldn’t believe that there was no sign of the real NG Resonance. She had arrived 14 hours prior, so I had to assume that she was being kept up on the flight deck - or was dead. 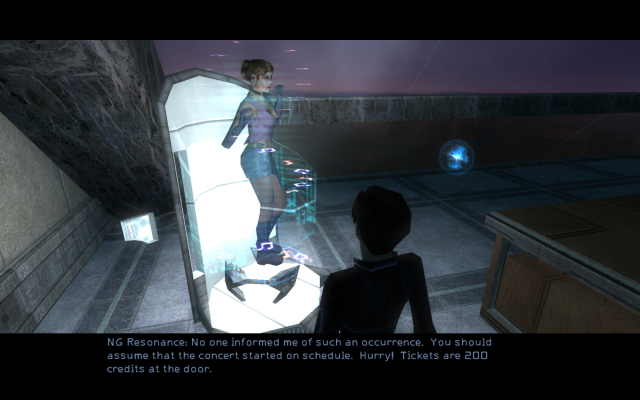 Or nothing happened, and there was a concert going on in the room

Before I went to the flight deck, I headed for the security office and shot the two Templars inside. Unfortunately, one of them hit the alarm button, so I had to shoot a turret with an EMP. For the hassle, I threw the Templars unconscious bodies into the gold laser grid covering the cell, setting them both on fire while I raided the supply chest for mods and ammo. I had a feeling that I’d need it…