This is my ongoing exploration of the Deus Ex Universe, in release order. Whether you’re a newcomer or an old-goer, I hope to make this something you can read along with and enjoy. I continue Deus Ex: Human Revolution.

After dealing with a couple of sidequests, I was on my way to the LIMB clinic for a checkup…

Going inside, I was greeted by someone that knew who I was - they had been expecting me. According to the most recent tests, there had been no build-up of glial tissue. That meant that I didn’t require Neuropozyne, the anti-rejection drug, and coupled with my speedy recovery this also meant that I was something of an oddity. She also informed me that Sarif had set aside a “generous” stipend for me, so that I could buy some Praxis Kits for upgrades. It turned out to be enough to afford a single kit, but more upgrades were more upgrades. 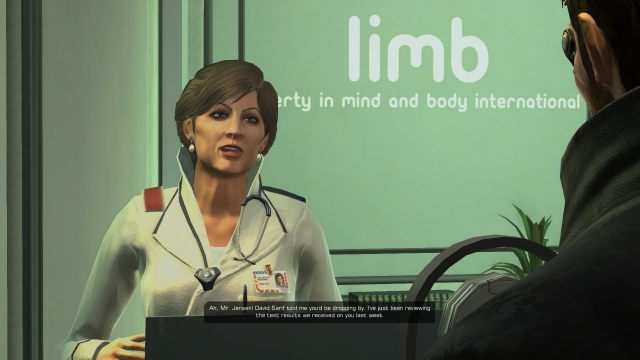 Deciding to investigate the facility, I went into the restricted surgical ward. There were two people in the hallway discussing surgical options, but they ignored me. Only one door would open, and that led me to an unlocked computer. Coincidence of coincidences, two of the emails were about me. The only other one was about a World Health Organization inspection team coming to check the clinic. One of the emails was about the stipend left by Sarif, while the other was an Adam Jensen medical record.

According to the record, the terrorist attack resulted in the loss of Jensen’s left arm, and required a full replacement of the chest cavity. However, the legs and right arm were also replaced under orders from Sarif, and authorised thanks to the employment contract… 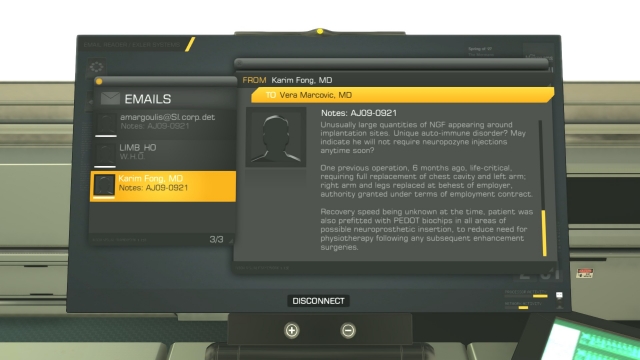 As I left the clinic, I upgraded my hacking ability with two Praxis Kits, allowing me to hack Level 3 terminals. Sarif gave me a call to hassle me about the neural hub again, hinting that I didn’t have to go in through the front door. I headed over to the police station, so that he’d shut up. I decided to look for this other entrance that kept being hinted about, and discovered a door in the nearby tunnel. The floor was wet and electrified, so I grabbed a couple of metal crates and used them to avoid being immediately killed - at least until I could reach the breaker and turn off the power.

The corridor led into an alley next to the police station, where the storage locker that former detective Chase said it was. I used the code - 4891 - and entered. There was Megan Reed’s autopsy report - ruling that her neck was broken before the fire consumed her - as well as two incident reports about the attack. I hacked the lock on a safe which had Megan’s bracelet inside, as well as some of her lab notes discussing this “truth” that she had to keep buried.

Elsewhere in the alley, I found a manhole cover. I opened it and began exploring. Climbing the first ladder that I found, I was suddenly in front of a door into the police station. That suited me fine, so I went in and hacked a laser grid. Avoiding the camera in the adjoining hallway, I looted through the lockers, stealing ammo and an upgrade, which I attached to my pistol.

An officer came into the locker room and I knocked them out before grabbing his stuff. Luckily, he had a pocket secretary on him, with the door code to the morgue. As I entered, the medical examiner inside asked if I was from Home Sec - apparently he’d been ordered by Joseph Manderley, future director of UNATCO, to detach the neural hub, but leave it in place. 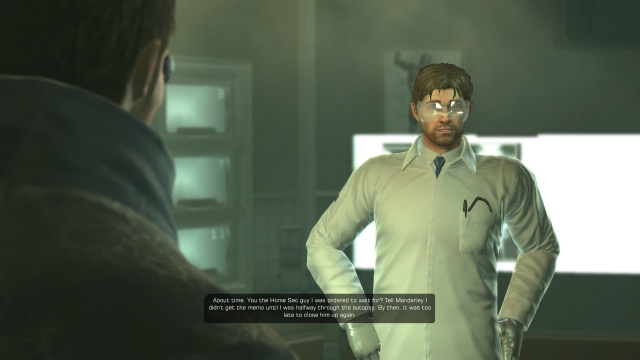 The medical examiner went to fix some reports while I swiped the neural hub before informing Sarif. He told me to take it home, where Pritchard would collect it later. I stole some stuff from the morgue before having a little look around the basement level. There were some people in cells, as well as two men in an office - I decided to leave them alone, and headed back to the sewer.

Pritchard called me to tell me that Detective Jenny Alexander had asked him to pass along a message - she needed my help on Grand River Road. Pritchard got pissy and hung up before I reached street level again. Since there had been other options to get into the police station, I grabbed a crate and placed it in front of a fire escape ladder. Climbing up, I hacked the door into the police station and went inside.

I avoided a camera and an officer, sneaking inside a vent shaft. It led me directly to Captain Penn’s office, where I swiped the ammo in his desk before hacking his PC. There was the email from Manderley that the medical examiner had referenced ordering them to keep the hacker’s corpse until someone from his agency - apparently called National Preparedness - could retrieve it. A second email from Manderley was about the attack six months ago, saying that it was critical that the investigation be wrapped up swiftly. There was also one from the medical examiner, annoyed that this was the second time a Sarif Industries-related attack had resulted in this kind of interference. The final email was just a profile of Zeke Sanders. 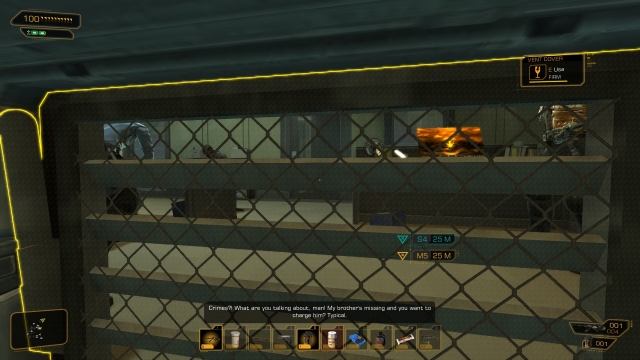 After deactivating some lasers, I went back into the ventilation shaft where I explored a little. I found a man being interrogated by three officers about his brother, and the armoury. I hacked the PC, using several Nuke hacks, and deactivated the cameras as well as opening the armoury door. I had to use a Praxis Kit to increase my inventory space, but it was worth it as I grabbed a P.E.P.S. (Pulsed Energy Projection System) Gun, some concussion grenades and a combat rifle. I didn’t have room for a shotgun, though.

Going back inside the vent shaft, I headed back to the exit and climbed down into the alley. I used a box to help me jump over the fence, and I headed for where Alexander told me to meet her. She was undercover as a prostitute, and after a bit of flirty conversation she asked me to help her take down a dirty cop by the name of Jack O’Malley. I wasn’t sure how Internal Affairs got undercover gigs, but anyway. She needed me to break into his apartment to search it, sneak into Derelict Row Ballers territory to find a weapons shipment, and pose as a hitman to take out a witness. 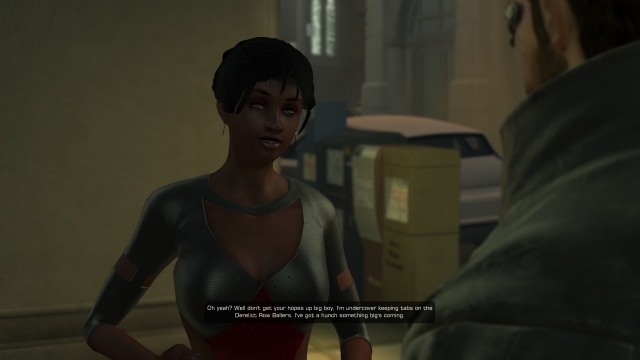 Rather than head home, I decided to go back to the alley beside the police station. I was supposed to be being introduced to O’Malley as a hitman, though as I arrived at the alley, it turned out to just be me introducing myself. As a former cop, I was surprised that he didn’t recognise Jensen when every other officer had, but still. He didn’t respond well to me speaking sarcastically, but he laid out the details - kill a man known as Double-T. Once that was done, I was to plant the weapon (a crossbow) in the rival gang’s territory, where they stashed all of their weapons. Since he knew the whereabouts of that, it really helped me out with what Alexander wanted me to do for her.

When pressed, O’Malley confirmed that this was a ploy to get the Motor City Bangers into a gang war with the Derelict Row Ballers. As I had the CASIE mod installed, I decided to douse him in pheremones, and appeased his alpha nature. He gave me 1,000 credits for my troubles, and I left to find the crossbow. 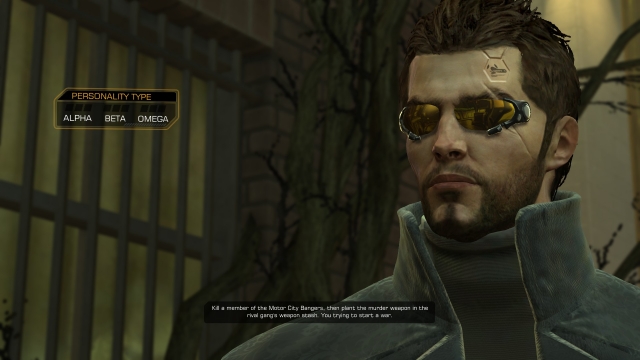 It was hidden behind some boxes in a passageway that led to Derelict Row, and was guarded by a couple of members of the gang. I decided to go and knock out Double-T for Alexander to arrest, and worry about infiltrating gang territory last. So, I headed over to the apartment building and climbed up the fire escape, entering through a window.

Double-T was guarded by a handful of gang members, so I waited for the two outside his apartment to finish chatting and split up before I shot one with a tranq dart. As I hadn’t unlocked the augment to allow me to punch through walls, I had to hide by the door and tranq the others. Unfortunately, I only managed to get two of them before they noticed me and returned fire. So, I tossed in a concussion grenade, knocking three of them to their feet. That left Double-T himself, so I waited for him to empty his weapon, then bopped him right in the face while he was reloading. 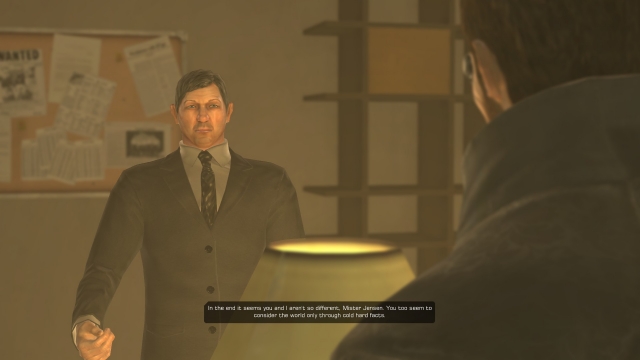 After looting everyone as well as the apartment, I dragged the one from the hallway into the apartment and closed the door. I still had to break into O’Malley’s apartment, so I went to his building - and it turned out to be the apartment with the mines I’d already been in! So, I found a weapons shipment, some drugs, and a new email on his computer: someone at FEMA was asking him to start the gang war… I broke into his safe for good measure, but as that was all of the easy stuff sorted, now I had to sneak undetected into a gang-controlled area to find their weapons…