This is my ongoing exploration of the Deus Ex Universe, in release order. Whether you’re a newcomer or an old-goer, I hope to make this something you can read along with and enjoy. This time I continue Deus Ex: The Fall.

Having met with Doctor Alverez Araujo and obtained an untraceable card for the L.I.M.B. clinic, I was heading there to get Anna Kelso some Neuropozyne…

Going through the boardwalk to the downtown area, I passed the Hotel Etrana on my right which I assumed I’d have to come back to at some point. For now, however, I continued down the street to the L.I.M.B. clinic, checking the bins as I went for lost credits.

I came across some storage lockers down an alley which distracted me, so I hacked them open to find ammo, an ID file, a fire rate weapon upgrade, a frag grenade, and some credits. Then I went to the clinic. 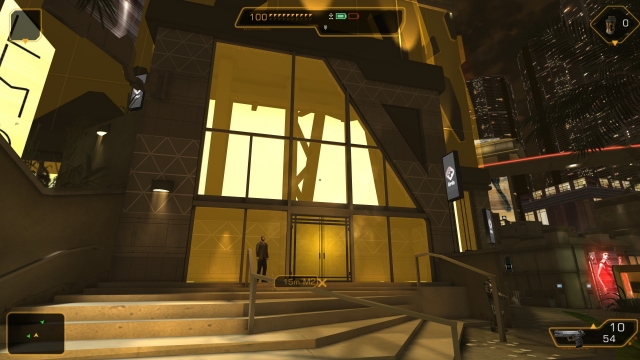 Speaking to the technician at reception, I asked for Doctor Camila Cardoso. Unfortunately, my preferred client card was rejected, though the doctor spoke to me over the intercom. I explained that Alverez sent me and she invited me inside. The first room I passed had a trauma kit and a safe, inside of which was a book and a Praxis kit. Good thing, too, as I needed to upgrade myself with Hacking Stealth 1 to get it.

The second room had an unlocked computer with an email exchange complaining about the Neuropozyne shortages. The third had a pocket secretary containing a safe code which I could have done with a minute earlier: 2020. Doctor Cardoso was in the final room, but was reluctant to give me an untraceable supply of Neuropozyne without me doing her a favour first: find out where the Skulls were getting their black market Riezene from, and what they were cutting it with. To aid me in this, I was to reach out to a gunrunner acquaintance of Cardoso’s named Cobra. 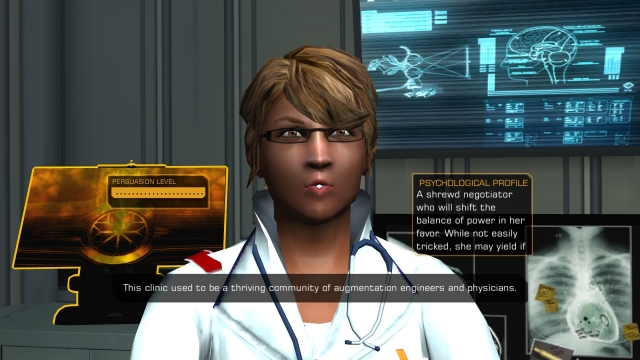 As I exited the clinic, a police officer stopped me to ask for my help. He wanted someone to obtain a pocket secretary with evidence of the illegal Riezene operation that Alvarez was conducting. Wanting some extra money, I agreed to do it since I knew it was probably in the safe that I’d broken into in his office. So, I went straight to the slums and into Alvarez’s clinic.

I found the pocket secretary right where I thought it would be, and on it was a personal log talking about how he was getting Riezene from someone named Diego. Large quantities, apparently. Curious what would happen, I spoke to Alvarez on my way out and was given the option to warn him — since I already had the evidence, I figured that I could warn him and then hand him over. Alvarez said that he would leave, and I returned to the officer outside the L.I.M.B. clinic.

I was sorry to see that my only option was to redirect him and say that Alvarez had already skipped town. The officer obviously suspected that I was to blame, as he threatened to beat me if I didn’t get out of there. Heading back to the boardwalk, I went into the train station to find Cobra in the men’s toilets. 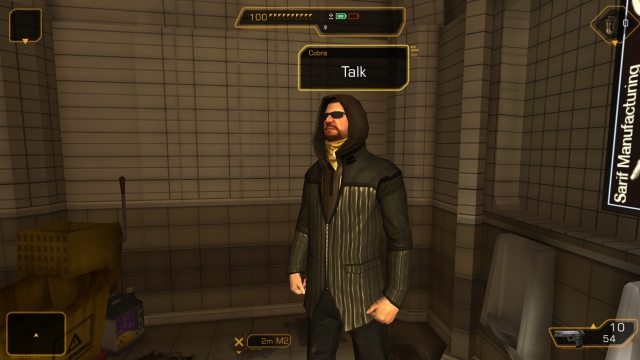 Cardoso had called ahead to say that I was coming. I decided to ignore his attempt to insult me, then went with the direct response when asked why I wanted info to go into Skulls territory. He said that he’d give me the information if I did something for him, so I agreed. He said that I needed to retrieve a pocket secretary off of Diego which listed his contacts. I sprayed him with pheromones and he handed me some ammunition, and I prepared to leave.

Screams came from the train platform, and Cobra freaked out as a member of the Skulls began shouting for him. I decided to deal with them, in case Cobra gave me something for the extra help, so I stealthily knocked out two of them. As I got into position to rush a third I was spotted, so had to shoot the rest. As it turned out, Cobra was still cowered in the toilets, and didn’t give me anything for helping…

I went to the slums and inside the drug den, sneaking through the ventilation shafts like before; I’d prefer to not draw attention to myself, after all. I climbed a ladder and went through a door into the garage area, then headed out the back to where I knew the Belltower truck and turret were. Barely managing to avoid the turret, I went around and grabbed a shipping form. The form showed that Belltower was supplying the Skulls with Riezene, via a cargo ship operated by XNG. I’d seen an XNG building earlier when I went to the L.I.M.B. clinic, so I knew I’d be headed there soon. I headed back to a door for the drug den and crossed the bridge to the drug lab — though I was spotted on the bridge, alerting everyone that I hadn’t killed yet.

Entering the room at the far left of the drug lab, which was still empty from my earlier visit, Diego stood up to address me. I told him that I wasn’t looking for trouble, then humbly said that I was only here to ask something (which he wasn’t too happy about judging by his persuasion level). He didn’t want to tell me where he was getting the Riezene, so I tried to deflect the conversation to people unable to pay for Neuropozyne. Since he still wasn’t playing ball, I sprayed him with pheromones.

Diego explained that their Riezene was the real drug, provided by Belltower personnel with “expensive tastes”. Belltower even got rid of anyone who overdosed, dumping the bodies in the ocean. He told me to get lost, but I still needed his pocket secretary, so I went behind him and knocked him out. Upon leaving his ersatz office, I found the lab once more had some Skulls wandering around. Luckily, they weren’t hostile toward me, so I was able to exit. But then I had to kill the Skulls in the main drug den before I could leave, as they were still on the hunt for me… 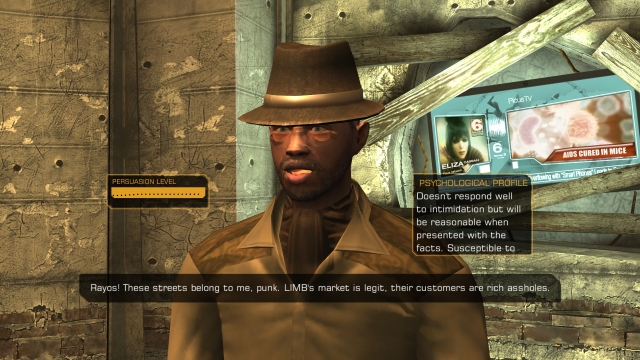 Going behind the Nightshades club, I found Cobra hiding. I handed over the pocket secretary, and he offered me a choice of rewards out of a weapon mod, credits, or a pass into the nightclub. I went for the silencer, figuring that I knew a back way into the club if required. While I thought about it, I fitted the silencer to my 10mm pistol, as well as a Rate of Fire and two Ammo Capacity mods.

I returned to Cardoso in the L.I.M.B. clinic who agreed to send Neuropozyne to an assigned P.O. box. Saxon explained the whole deal to Cardoso, and she was shocked to hear that the city was being used for human testing of an obviously-dangerous drug. She told me about a potential whistleblower, Alex Vega, who was a pilot for Belltower. If nothing else, she potentially had a contact at the World Health Organization. 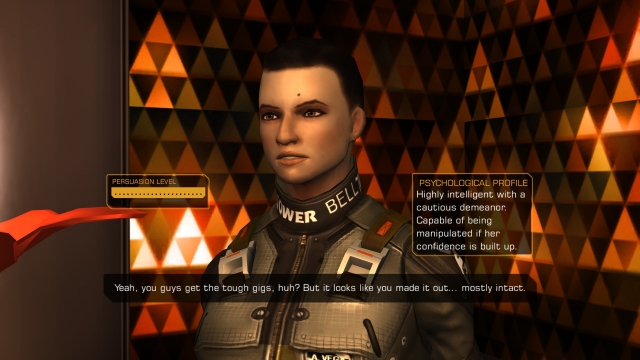 I left the L.I.M.B. clinic and headed back to Nightshades, where Vega should be if she was off work. As I walked, Saxon called Kelso and told her to get the Neuropozyne when it arrived the next day. I decided to do some augmentation before I got there, upgrading my Hacking Stealth 2 & 3, and my Cloaking System.

Once at Nightshades a bouncer stopped me from entering. After a quick spray of pheromones (and threatening his genitals), he let me through. I quickly found Vega and offered to buy her a drink. She was suitably unimpressed but seemed to warm to me when I explained that I used to be Belltower too. She introduced herself, and I decided to appease her. She continued so I tried the direct approach, stating that back in my day we didn’t peddle drugs to gangs. Vega got defensive, telling me that she had nothing to do with that stuff, so I inquired what had gotten her so rattled.

Vega went on to explain that she was ferrying around an inspector, with the implication that if the inspector needed to “have an accident” she was in the crosshairs too. I sprayed her with pheromones and she asked me to approach the inspector at Hotel Etana, and warn him that he was in danger. Unfortunately, the whole floor was under lockdown, so getting in would be a dicey proposition. Vega gave me her clearance codes to access the locked doors and I left the club. Room service was needed…