This is my ongoing exploration of the Deus Ex Universe, in release order. Whether you’re a newcomer or an old—goer, I hope to make this something you can read along with and enjoy. I continue Deus Ex: Human Revolution.

A lead from Detroit had led me to Hengsha in China, on the trail of hacker Aerie van Bruggen — who was also being chased by Belltower Associates…

I had followed his trail to The HIVE, a nightclub, and made my way inside via the sewers. A camera monitored one end of the passageway, but going down the other way led me to the security room, complete with two computers to hack, and a safe to crack. Unfortunately, opening the door somehow alarmed everyone, although not enough to make them come and look. Once I had deactivated the cameras and stole credits out of the safe, I checked the emails on the other computer. 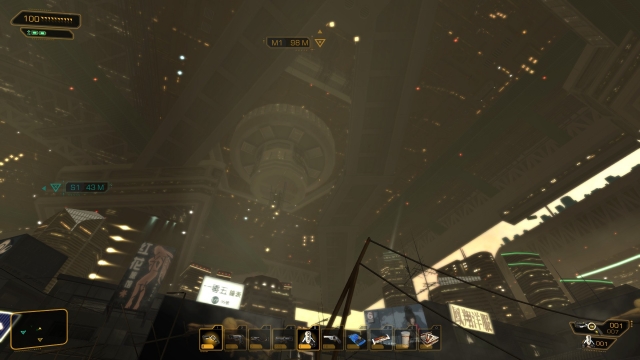 One was from club owner Tong Si Hung, agreeing to meet with someone called Chun, another from ‘brassknuckles’ unable to collect a debt, and a third with an offer of a fight club participant from someone called Bohai. What I found interesting about that one, is that Bohai called them a “GIANT of a Mongolian” at 173cm — which is 5ft 8in, so hardly a “giant”. On the other hand, Wikipedia says that it’s 6cm taller than the average Mongolian, so perhaps that’s what they were going for?

As the cameras were now disabled, I crept back along the hallway I’d come down, finding a door with a grate and what looked like someone sat in a chair just inside. I hacked the door and went inside, finding a dead body with a pocket secretary on them. It was from ‘winterplum’ begging ‘protector’ to not try and sweet talk their way out of “this mess” — clearly it had all gone wrong. A nearby trolley held a rate of fire weapons mod, so I installed it on my 10mm pistol.

I decided to leave the room via a vent shaft, but it just let me out in the hallway. My radar showed that there was someone around the corner, so I checked and spotted them. Hurrying over as they turned around, I knocked them out and dragged them over to another vent before going inside. Much to my surprise, a cutscene started. 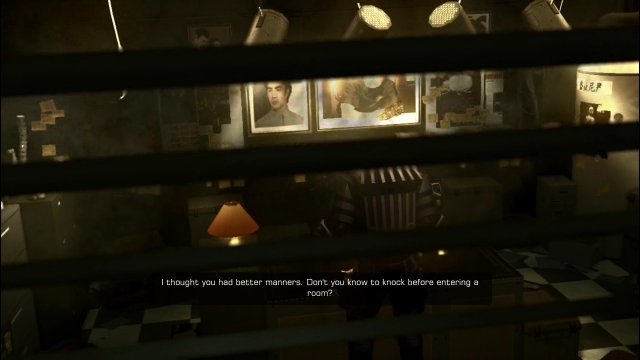 Tong Si Hung was being confronted by someone from Belltower, who wanted information on van Bruggen. Tong feigned ignorance and was threatened that it would displease “the Dragon Queen” before the mercenary left. Tong then called someone, telling them to get a message to capsule 301 of the Alice Garden pods, to warn van Bruggen to keep his head down, otherwise Tai Yong Medical was going to chop it off.

As I left the vent, Jensen called Malik who was coincidentally at the pods. Jensen said that he was on his way, but I wanted to look around the club first. As I exited through a door into the club proper, the door itself alerted someone guarding nearby, but I went unnoticed. There was a pocket secretary in the men’s room with a basement door code in it, but I figured I didn’t need that anymore. Speaking to the barman, Bobby Bao, he offered me a job. No, not slinging drinks, but collecting some money from a broker named Jaya. However, she was in hiding, so I needed to hack some Belltower relay antennas in the Youzhao district. 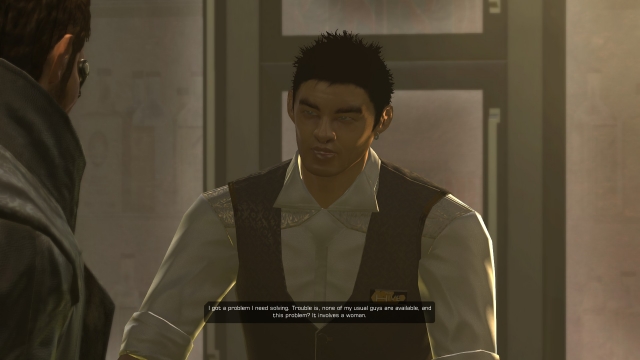 With that, I left for the district. van Bruggen would still be there when I got back, or he’d be dead. The first two antennas were along the route I’d taken when I went to find van Bruggen the first time, and I hacked them without incident. The third I managed to reach thanks to the hole in the wall that I had punched earlier — I just had to be careful in case the Belltower mercs heard me. Bobby ran a trace on the target, and I was already nearby. She was in the apartment next door to van Bruggen’s!

Entering the apartment building via the elevator shaft, as before, I went up to Jaya’s apartment and spoke to her. I tried to be diplomatic, but she was having none of it — she had paid Tong back for the biomod that he’d given her, but they wanted a percentage of her earnings on an ongoing basis. So, I sprayed her with pheromones from my CASIE augment and appeased her alpha personality. She gave me the money she owed — 250 credits — and I returned to Bobby.

Well, technically I went the long way around, hacking a gate, climbing a ladder, and punching through two walls. I also stacked some boxes to get an ammo capacity weapon upgrade, which I attached to my revolver. Then I returned to Bobby. Rather than just giving him the money, I asked what it would take to get them to back off permanently. Bobby offered to take 5,000 credits, so I paid that. It wasn’t for altruistic reasons, I just figured that I’d get more experience. More experience meant more Praxis kits. Speaking of Praxis kits, Bobby gave me one and I realised that I now had six. So, after I left the club, I decided on some upgrades. I went for Smart Vision, to let me see through walls; the Icarus Landing System, because I was sick of climbing down ladders and just wanted to jump; and the Stealth Enhancer to help me with sneaking.

Entering the Alice Garden pods building, I found what appeared to be more like a village than a hotel. There were shops and restaurants, and people chatting. I entered the main building, being guarded by some thugs, and hacked a door into the office. I read an ebook, then hacked the computer to read their emails. Someone was complaining about trash, someone wanted to extend their lease, one was a 419 scam — and the fourth was from Tong, telling the proprietor to “make sure 301 gets whatever” they want. At least until Tong got him aboard a ship to Hong Kong, at least.

After hacking the safe for good measure, getting 1015 credits out of it, I headed upstairs. To my surprise, I almost walked into Malik who said that she was just leaving. After a bit of back-and-forth, she explained that her friend who lived around here with her some time ago had died. The police report seemed suspicious, and she wanted me to look into it for her. I had to meet a LIMB technician who was going to hand over an autopsy report, I just had to remember to say “Death and life have their determined appointments”. Oh, and his name was “Anonymous X”. Jensen seemed less than thrilled, but that’s what I get for agreeing to things without asking for details first! Malik left, and I explored the communal area, with some bodegas and street food vendors. I found an armour-piercing weapons mod, but was unable to attach it to any of my weapons. I had to drop some ammo, but I decided to keep it on me to sell at a later time. Heading upstairs, I looked around the pods. People were living in them long term from the looks of things, probably because it was cheaper than an apartment. I found the information that Malik had been here to read, and skimmed over it. The victim’s drunk, blood-covered boyfriend had been the only witness, so was detained and tested positive for drugs. However, he was released pending further evidence.

Going upstairs, I found pod 301 and opened it up, locating van Bruggen. He freely admitted that he was operating the hacker remotely, but he regretted taking the job because it had clearly screwed him over in the long term. He told me that the one who hired him was the CEO of Tai Yong Medical, Zhao Yun Ru. He had proof, but it was on a server inside Tai Yong, and the only way inside was with an employee card encoded with my biometrics. It just so happened that I’d nabbed an employee card earlier, and had my biometrics on my diplomatic passport. I handed them over and waited. 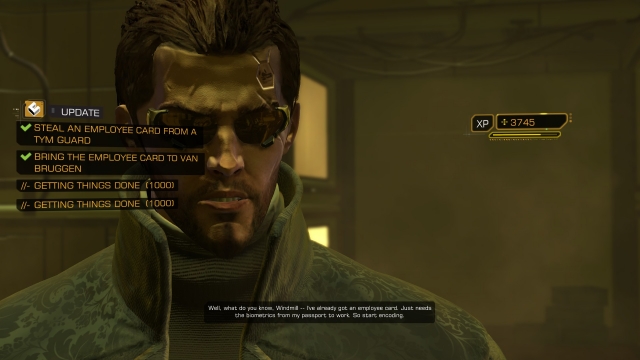 Shortly, van Bruggen handed it over and told me that I needed to ride the train to Tai Yong, then find my way up the tower. It wouldn’t be easy, but I was a kick-ass cyborg. Unfortunately, that’s when mercenaries from Tai Yong Medical burst through the skylight using the Icarus Landing System! I gave van Bruggan my combat rifle, not wanting to part with my heavily upgraded 10mm pistol or my revolver, then began sneaking. I stunned one merc but was spotted by a second before I could stun him too. They were spread all over the place, so I went downstairs via the nearby stairwell. At the bottom, I got into a firefight and killed a couple of men before heading down to the locker room. I avoided the merc patrolling near a camera (and the camera itself) and hopped over some shower walls to avoid proximity mines. Unfortunately, one exploded and though it left me unharmed, it alerted the two men in the next row over. They chased me, but I ran through to the next shower room.

The floor was electrified, but since I had the strength augmentation I could lift the big boxes. I stacked them in a line and crossed to the other side, punching through a wall to get into a maintenance corridor. I passed another punchable wall, finding a third one at the far end. Smashing through it, I alerted two men in the nearby laundry room, but a couple of shots from my stun gun took them down nicely.

Following the passage, I came to a corner being patrolled by two men, one of whom was heavily armoured. Thankfully, I had picked up a grenade somewhere and tossed it, killing them both. With the way clear, I exited the building and called Malik. I needed her to get Pritchard to gather as much information about the Tai Yong Medical building as possible, and he had until I next called to get it. Things were going to get interesting…