This is my ongoing exploration of the Deus Ex Universe, in release order. Whether you’re a newcomer or an old-goer, I hope to make this something you can read along with and enjoy. I continue with Deus Ex: Invisible War.

It’s been five years since I last published one of these diaries, and it’s thanks to the Deus Ex Visible Upgrade and this guide on the GOG forum that it returns now!

Having gone to Cairo in search of Leila Nassif, I had made my way to a mosque where Billie Adams was waiting to speak to me about where to find Leila…

Upon entering the mosque, a security guard told me that I had to allow my weapons to be deactivated. After agreeing, I took a cautious look around in case this was a double-cross. Billie was in the main area with a man called Luminon Saman, who was from the German shard of the Order Church. She introduced us, then said that Leila had likely gone to ApostleCorps headquarters, which was here in Cairo. With that info under my belt, I explored the mosque. 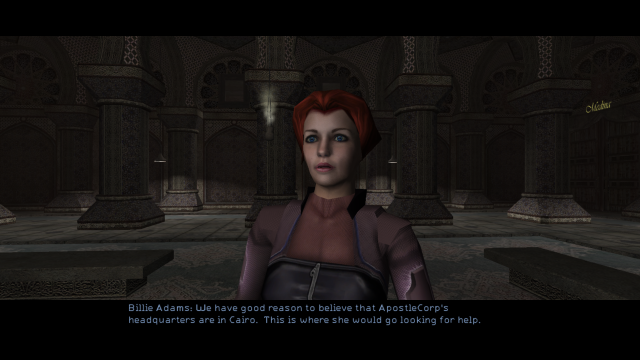 The mosque was pretty impressive

Saman was in an office, and upon speaking to him I learned that he was “amicably” opposed to Her Holiness, the leader of the church. Apparently, the church was getting too commercial for his shard’s liking.

Down a ramp, there was an infirmary where a woman asked me to hack into the Tarsus Academy computers to get her child enrolled. Well, I believe she said that jokingly, but Alex D. agreed to do it anyway. According to the head physician, the air in this area was so bad because of nanite dust from Nanite Swell 11. Obviously, the mother wanted her child to get decent, filtered, air in Tarsus.

I returned to the elevator and left, doing a little snooping around the arcology but to little avail. I joined the Templars at their recruitment booth, after saying that I wanted biomodded scum to die, but they said people would be watching me to see if they would let me join. I decided to keep my mod use to a minimum, until I heard one way or another. 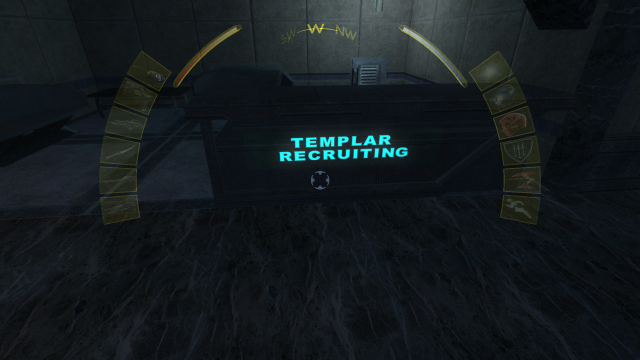 Deciding to return to the streets, I made my way to the North Medina in search of Leila’s relative. I briefly spoke to a man claiming to be selling a miracle cure for the effects of the nanite cloud (despite still wearing a breather himself…) called VitaTech Cure-11, but decided not to buy it from him. Choosing to explore a little before hitting the apartments, I came across Leo Jankowski, who I knew from Tarsus in Seattle. I told him that the Templars were going to attack, because he was guarding an Omar Trader - and staying on their good side was the key to getting discounts.

Speaking of which, I bought two black-market mod canisters, and they gave me a mission. I was to go to the flight bay, speak to the woman at the information booth, and upload a schematic of some Templar exoskeletal armour. Bonus, there was a cure for the nanites being stored there, for some reason not being mass-produced for use. 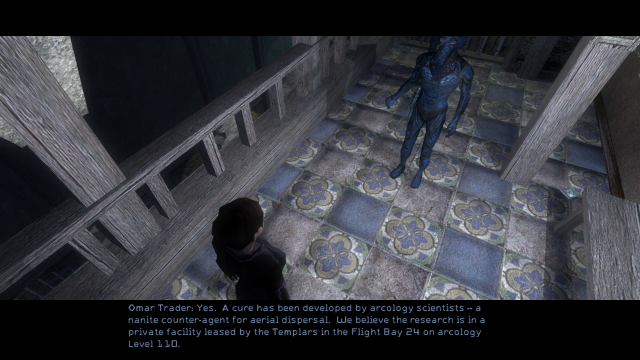 Heading for the apartments, I overheard someone leading on her boyfriend, because she didn’t want him living in the arcology and close to her husband. She seemed to be fine with the fact that the very air in the Medina was hazardous. However, that didn’t concern me and I went upstairs, to Maskini Nassif’s apartment. Going inside, he confronted me about the fact that I had killed his brother in the greenhouse, and said he wouldn’t help me gain access to Tarsus Academy so that I could speak to his daughter Eeva. He didn’t kick me out, though, so I went into his bedroom and picked the lock on his storage chest, taking his parental access pass from inside.

Returning to the arcology, I was contacted by the Omar, who thanked me for warning them about the attack. They reassured me that I remained a valued customer, thanks to that information. Since I had two missions in the flight deck, I figured that I should head there first.

After heading down the ramp, I had to wait for the woman in front to finish kvetching at the lady I needed to speak to. She was a World Trade Organisation Tax Auditor, wanting to review the Templars tariff payments - but she was getting the runaround. I gave the passphrase to the receptionist, who gave me the door code, then spoke to the auditor who asked me to get evidence what the Templars were keeping her from. As luck would have it, she needed me to break into flight deck 24, where both of my other missions were. 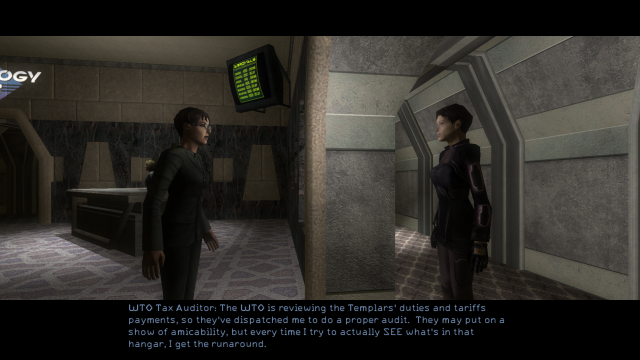 After a bit of exploration, I found a grate which led to a ladder, taking me upstairs to a pair of lockers. Inside one was a code for a safe in flight deck 24, so I took that and some credits, and headed back the way I came. I won’t bore you with the number of times I tried to get into the flight deck and complete my objectives, so I’ll skip ahead.

With my Boltcaster equipped, I opened the door and shot a guard to the right. Once she was down, I shot a second guard on the upper level to the right. With those two down, I shot the third guard, to the left, and headed up a ladder to the right. There was a big robot stomping around, but I didn’t have to worry about him, for now at least.

Upstairs, there was a message from Chairman Christopher Ubair, who it turned out was a Templar, and the reason for the cure not being manufactured, as he was telling whomever the message was for to get rid of the cure. After heading back down, I avoided the robot and went through a door on the left wall. There was something inside causing me slow damage, but I quickly went to the wall safe, broke in and took the datacube with the cure data on it.

Back out of the room, I activated my biomod that created a defense against rockets, and went for the one box which I hadn’t yet opened. It contained the exoskeleton information for the Omar. The big robot had fired a few rockets at me, so I hightailed it, lest I run out of biomod energy, and deactivated my Aggressive Defense Drone as I exited.

Of course, I fully expected the rest of the guards to come after me, but as I returned to the reception area they were placid as ever. I turned in the Templars to the auditor, as they couldn’t possibly be paying enough taxes for the large number of things they were transporting. I then went back through the duct to confront the chairman, who offered me money to not say anything. I took his money, and he gave me a pretty convincing reason for not developing the counter-agent more. It hadn’t been tested fully, and he didn’t want to unleash something worse than what was currently killing people. But I'm not you

That’s not to say I completely dismissed the possibility that I would deploy the cure myself. I wasn’t responsible for everyone in Cairo, after all, and it might work. With that done, I went back up to the elevator, but first spoke to NG Resonance’s manager, and paid her a bribe to get Pequod Coffee a positive word or two from the pop star - once she arrived. I nipped down the elevator and spoke to the Pequod’s manager, who gave me a biomod container for my troubles.

There was a hologram of NG which I spoke to, and it let me know that the chairman was going to face the courts due to what I’d uncovered. I had the option to tell it that NG’s manager was taking bribes, but decided against it. It also told me that the kids at the academy snuck away through a duct to hang out, out of sight of the teachers. Since I had to go there anyway, I decided to make that the next stop on my tour…