It’s the 40th birthday of one of gaming’s most iconic and beloved figures, Pac-Man. He’s been with us longer than most of you reading this have probably been alive, let alone able to wrap your stubby baby-fingers around an arcade joystick. While it can be easily forgotten among all the Fortnites, FIFAs and Farmvilles of today, gaming used to be a seriously niche hobby. Nowhere is this better demonstrated than in the arcades of the early 80s, which were as uninviting as crack dens—if much safer—to anyone but adolescent males. This all changed with the release of Pac-Man in 1980. Without the guns, violence or aggression that were (and to an extent, still are) synonymous with gaming, Pac-Man was able to appeal to a far wider audience than any game before it, drawing in diverse crowds on a scale that gaming had, until that point, simply never seen. It was the push gaming needed to secure a permanent place in global culture, and although the industry would fall upon hard times (the 1983 US videogame crash was just on the horizon, after all), Pac-Man never faded from the public consciousness. He’s certainly a figure worth celebrating, and on his 40th birthday, it feels appropriate to celebrate at the guest of honour’s expense! That’s right, like a best man’s speech full of shameful tales of youthful, drunken nights out, we’re gonna dredge up a decidedly shameful part of Pac-Man’s history: his forays into the world of TV. You may not be aware, but Pac-Man has tried his hand at being an animated TV star not once, but twice—roughly three decades apart. How do you make multiple shows based on a game with less narrative than the back of a shampoo bottle, you ask? Well, you get a little—shall we say—creative with it….

The first Pac-Man show, which debuted all the way back in 1982, was (as far as my research could tell) the earliest cartoon based on a videogame property. While that may be an impressive and interesting little nugget of trivia, being the first of its kind doesn’t bode well for the show’s actual quality. Surprisingly, however, Hanna-Barbera (of Tom and Jerry, The Flintstones and Scooby-Doo fame) produced Pac-Man: The Animated Series and helped make it a passable, if not outstanding little show with a brief two-season run. Somewhat formulaic and enjoyably surreal, Pac-Man: The Animated Series channels enough of that ‘Saturday morning cartoon’ feeling to remain tolerable to anyone who spent their childhood mornings cross-legged in front of the TV, bowl of cereal in hand and thoughts of the schoolyard being kept at bay by a stream of colourful ten-minute slapstick adventures. The premise keeps things basic, using the familiar conventions that defined the ‘Jetsons/Flintstones’ era of cartoons. Pac-Man, his entire Pac-Family and all their Pac-neighbours live happily in Pac-Land, a community that very much resembles our own, but with distinct Pac-twists. In addition to enjoying the day-to-day pleasures of Pac-life and going on exciting Pac-ventures, Pac-Man must thwart arch-villain Mezmaron (inexplicably the only human in Pac-Land) and his gormless ghost minions as they attempt to steal power-pellets, Pac-Land’s primary source of power.

It's perhaps a little too inoffensive—enough to border on bland—and the various Pac-characters all share the same 'dopey' quality that comes with a couple-dozen missing IQ points (and maybe a few nasty bumps to the head). Still, the dream-like Pac-reality presented by the show makes it worth checking out at least a few episodes. Plus, its position as a product of Hanna-Barbera and the first ever videogame cartoon cements it as a piece of cartoon history. Not bad Pac-Man, certainly not worthy of the “shameful” label I teased earlier. Oh no, to find where Pac-Man really made a fool of himself, we’re going to have to jump forward about 30 years to 2013.

Pac-Man and the Ghostly Adventures is… ambitious, if nothing else. While the ‘80s cartoon was content to contain its adventures in a humble village, this modern take on Pac-Man branches out to a sprawling futuristic metropolis recovering from two devastating ‘PacWorld Wars’. Its stories no longer centre around innocent family-focused hijinks with meddling ghosts, but jump from alien invasions to time travel and even genies. Ghosts are still a threat; in fact, they’re given motivation in the show’s world as the losers of PacWorld War One and Two who lost access to their corporeal forms as penance for various war crimes. 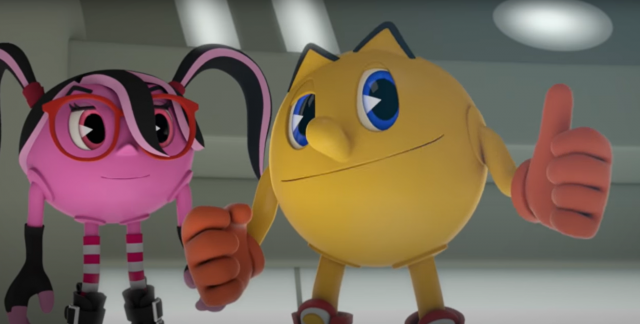 Writing this out, I’m struck with the realisation that this sounds like a pretty fantastic kids show with enough substance to both entertain kids and keep their parents engaged. Unfortunately, this is a classic case of “sounds good on paper… but”. Drowning out all its talk of PacWars and fantastical adventures is Pac-Man and the Ghostly Adventures’ patronising writing, obnoxious attitude and reliance on toilet humour. It reeks of writers with good intentions being forced into diluting their ideas with crap—quite literally. If the ‘80s cartoon was a quiet child who got his homework done on time and never caused trouble, this modern animation is a smart, but hyperactive kid who won’t shut up or stay still for longer than it takes to open a pack of Starburst.

Exactly why anyone thought 2013 was a good time to capitalise on the Pac-Man license is beyond me: the 2010s weren’t exactly the years of prime Pac-Man popularity. Still, the show managed to pull in some devoted fans, as evidenced by the Change.org petitions (clearly written by incredibly passionate children) begging for a third season that’ll likely never see the light of day. It just goes to show that every piece of entertainment, no matter how flawed, is someone’s all-time favourite. 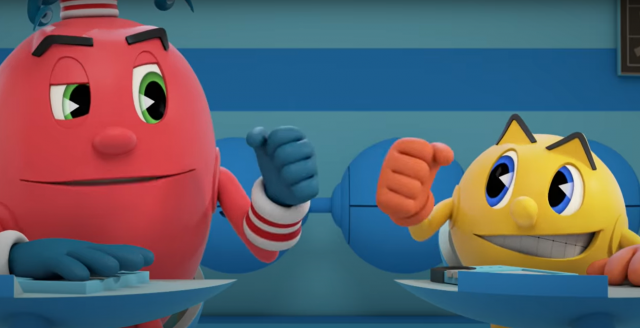 Pac-Man is simple, addicting and as iconic now as it was 40 years ago. His TV endeavours may have been imperfect, to say the least, but they only prove that Pac-Man is truly a monumental part of not only gaming culture, but culture at large. Over these 40 years, countless franchises, genres and companies have risen and fallen; throughout it all, like a benevolent god watching over us, Pac-Man has always been there—hopefully he always will be.

Here’s to another 40 years Pac-Man!