Top 5 Films For When You Finish Ghost Of Tsushima

If you’re reading this article, you’ve, in all likelihood, successfully mowed through the hordes of Mongol invaders on the cosy little island of Tsushima, and are hungry for more katana swinging goodness. Luckily for you, Sucker Punch drew heavily from many classic Japanese films when developing Ghost of Tsushima, so there’s a whole host of content for you to enjoy (which will also help you to appreciate how respectful Sucker Punch was to the chanbara genre). Here’s a few of my favourites to get you started.

Sanjuro, released in 1962, is the lesser known follow up to Akira Kurosawa’s beloved Yojimbo from the previous year. Whilst technically a sequel to Yojimbo, the film stands on its own and can be watched independent of its elder brother. The film follows a wandering ronin (played by Toshiro Mifune) who encounters a naive and silly group of samurai who are attempting to root out corruption in their village. However, the samurai prove themselves ineffective at doing this, so the ronin takes charge in attempting to apprehend the corrupt lord chamberlain. Of Akira Kurosawa’s work, Sanjuro is probably the most light-hearted. Toshiro Mifune’s portrayal of the main character is very comedic and large parts of the film plays to slapstick humour, which won’t appeal to everyone. The story is solid, however, and there’s some excellent fight scenes that showcase Kurosawa’s effortless mastery over blocking and sword choreography. The end duel, in particular, is one of the most influential in cinema history.

When you think of the archetype of the wandering ronin, it’s likely that the character you imagine is someone along the lines of Toshiro Mifune’s character in Yojimbo (1961). Despite being infinitely inspirational in its own right, Yojimbo was itself inspired by the Western genre popularised by John Ford, and is suitably based in a similar setting. Two gangs are at war in an isolated town in the middle of nowhere, and a drifter comes along and plays them both against each other. If this sounds familiar, this might be because Sergio Leone’s own Fistful of Dollars (1964) was based on this film!

Mifune’s ronin is cool and sardonic, and where Sanjuro goes head first into comedy, Yojimbo opts for a more tense and quiet atmosphere (though there are numerous comedic moments in the film). The swordplay and cinematography is timeless and the film has a large legacy following it because of this. Yojimbo is one of Akira Kurosawa’s best, and sits firmly on this list as a result.

Number 3: The Sword of Doom

The best way to summarise The Sword of Doom (from 1966) is to say that it is a revenge film from the perspective of the villain. Ryunosuke, played by Tatsuya Nakadai, is an amoral samurai whose skill with the sword is unparalleled. During a mock duel with a rival, he kills his opponent with a wooden sword swing, and is forced to leave his village (but not before cutting down a large group of his dead opponent’s clansmen). 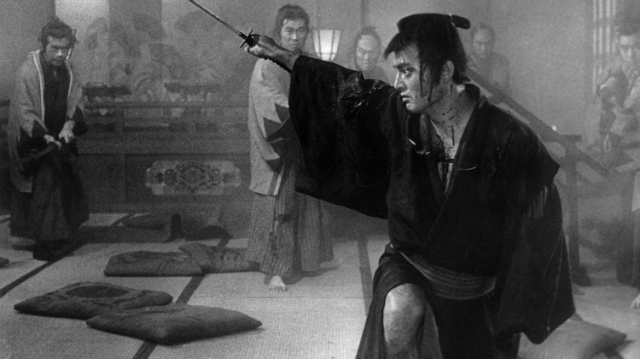 The Sword of Doom is a very harrowing film, but is interesting due to the reversal of the roles of the protagonist and antagonist. Tatsuya Nakadai’s performance of the psychopath samurai is both thrilling and chilling, and the fight choreography is some of the best you can get from classic samurai cinema. This is also one of the two films on the list not directed by Akira Kurosawa, instead by Kihachi Okamoto.

Harakiri (1962) is in many ways parallel to what Ghost of Tsushima sets out to do. Directed by Masaki Kobayashi, the film explores the samurai code and the various hypocrisies therein. To explain how and why would spoil much of the film, but I will say that Harakiri is less of an action film than a thriller, and much of it is a slow build to a grand finale that will not disappoint. This is also my personal favourite samurai movie. There isn’t really much I can say about Seven Samurai (1954) that hasn’t been said already. It has been listed numerous times as one of the greatest films ever made, and is by far Akira Kurosawa’s most famous and popular. The plot begins with a group of farmers that are being harassed each harvest by a group of bandits that take all of their crops. In order to resist the bandits, they hire seven ronin to protect the village and save the food. It was also the basis for the Western classic The Magnificent Seven, proving Akira Kurosawa’s strong influence on film history yet again. The characters are memorable and relatable, the action is grand and thrilling, and the cinematography is gorgeous. Make no mistake, if you want to get into samurai films, Seven Samurai is a must watch. 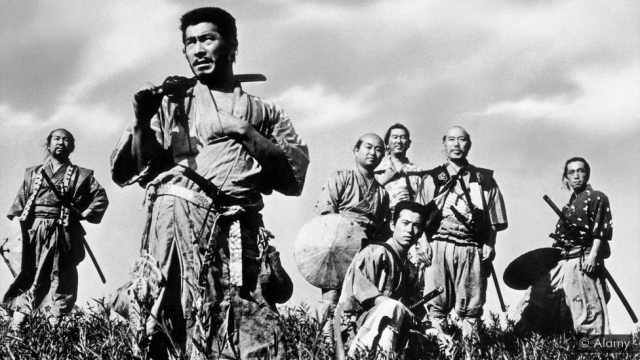 So, that’s my list. There’s loads more to get stuck into, but these are some of the best to transition into to start with, in my opinion. If you have any personal favourites you’d like to share that aren’t on here, comment below!