After Bourbon’s past caught up with him, I had teamed up with Khan to head for Cursed station…

As we traveled on the cart, Khan seemed to know that I was headed to Polis. I didn’t have time to discuss it, as we were arriving at our destination. It was named Cursed station due to being constantly under attack by mutants, and its residents had literally nowhere else to go. They could leave and die, or stay and probably die. What’s more - it was currently under attack. You know: like always.

We met up with four men defending the area (presumably there was a hidden door because I could hear a child crying, but not see one), and they apprised Khan of the situation. Nosalis were coming from the left tunnel, and they had sent someone to blow it up - but not heard back from them. So Khan told me to find the bomb and set it off, while he stayed with everyone else and didn’t do that. Also, close “the airlock” where more nosalis were coming from. Since the demolition team were sent to take down the left tunnel, I went into the right one for looting. I had picked up a bit of ammo, though it wouldn’t do me much good, so I walked to make less noise than running. I found a better revolver than the one I was holding, so swapped it, then went to the far end of the tunnel. I found a type of shotgun, as well as the bomb. Seems they missed the left tunnel by about an entire tunnel…

Deciding on more exploring/looting before completing my task, I checked out the platform and found some stairs. I went up and was attacked by something that didn’t exactly look like a nosalis, and took quite a shooting to take down. Once it was dead, I noticed something attached to a pillar, and upon activating it, Artyom lit a stick of dynamite and put it there. I ran like hell, and it blew, apparently sealing off the “airlock”.

I realised that I should probably do my job, so ran for the left tunnel. A bunch of nosalis dropped down and ran at me, so I shot them and threw explosives at the couple of waves. Upon reaching the end of the tunnel, Artyom placed the explosive and lit the fuse. Again, I ran for it and almost reached the middle of the platform as the huge explosion went off, making my ears ring very badly.

Khan came over and congratulated me, but this was as far as he could go. He was sending me on to Armory station (AKA The Smithy), where I should meet his friend Andrew the Blacksmith, who would help me. Quite how, and with what, he wasn’t too forthcoming, but presumably it was to do with the Communists and Nazis that lay between me and Polis. You could come with me...

After shooing some shadows away, Khan led me into a temple and told me to go down a ladder. The tunnels I would have used had collapsed. I mean, obviously, I was the one who blew them up…

I came out into a tunnel with a gas leak, so popped on my gasmask and went through it. I approached a wooden sign across the path, and was blinded by a light. The blockade ahead of me saw that I was human, and told me that I could enter their “free station”. As I entered, I was warned that the station was run by Communists, so I should keep my head down - which I very much planned on doing. 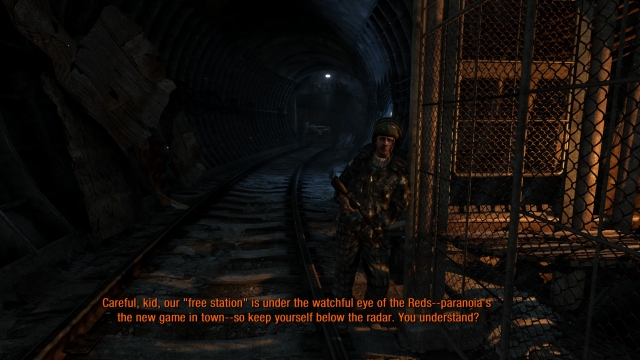 A tannoy announcement went out, saying that inspections were beginning. I wondered what that meant for me, but continued on my way as a couple of men began arguing. My only route was towards the argument, but when I went near the door I was pulled inside by one man and arrested by a second. This was not a good start.

The third man in the room said that he would go quietly with them - then punched both of the police and told me to run. I had been handcuffed, so when we got outside the room he pushed a locker in front of the door to cover our escape. Which worked for all of one second, before we were being shouted at to stop running - then the bullets began to rain. 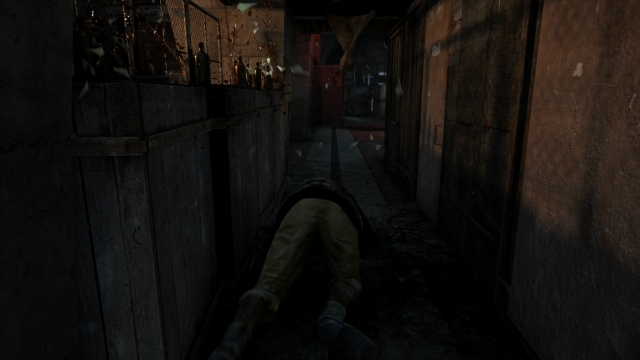 This doesn't look like it's safer than being arrested!

We legged it together, somehow managing to avoid the hail of gunfire which followed and met us at every turn. I went up some stairs and was cut off both front and back, so I jumped off and was grabbed by the guy from before, who pulled me into his room and shut the door.

Now (somehow) safe, Andrew the Blacksmith (what a coincidence!) freed me of the handcuffs and told me that he could get me out of the station - but the only way out was to send me to the front lines. The Communists were at war with the Nazis, and being shipped out with the next batch of soldiers was the only option. 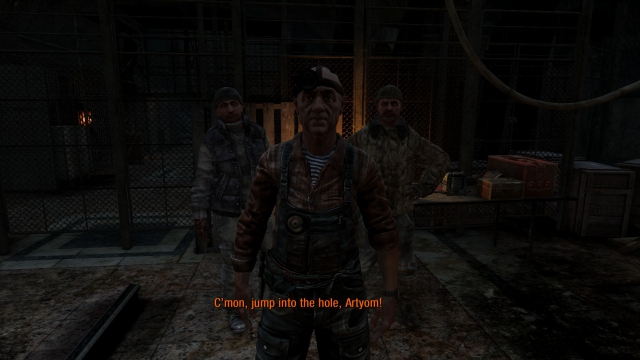 Andrew led me to two other men, though I stopped for ammo and upgrades first, and they told me to get in a hole, which they moved a hand cart over for me to get into the luggage space beneath. They bid me farewell, and took me to the train tracks. Some soldiers climbed aboard and together we left, on our way to war with the Nazis…