Having escaped both Communists and Nazis in the space of one afternoon, I had lost my new ranger buddy Pavel to a nosalis attack while on the way to Black station, and now had no idea where I was…

Heading towards the train, I passed a glowing tunnel. I figured that was where I might get eaten, so ignored it. I set off a tripwire and almost got blown up, but made it to the end of the train where a door was open. I went inside and looted the bodies for ammo and found a journal, just as a mutant slammed itself against the closed door and frightened me.

Back around the other side of the train (and disarming another trip wire along the way), I returned to the glowing tunnel and went through. Luckily, it led to humans. Unluckily, they were about to be attacked by mutants - just my luck. Before the monsters could attack though, we were hit by an anomaly, which knocked the wind out of us. 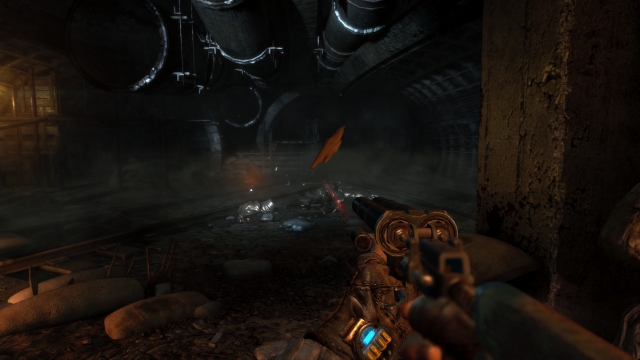 The three men and their captain helped me fend off a ton of various mutants, before another anomaly took us all down. When I came to, I couldn’t loot the other men so I assumed they were still alive. However, the captain told me to get to the communications equipment and send out the automatic message he had readied. Always happy to do whatever anyone tells me, I headed into Hole station.

The place had been evacuated during our battle - good thing too, given the amount of fires burning - so there were corpses littering the place, and a mutant type called “lurkers” burrowing holes all over. I had to watch my step so that I didn’t fall into one of the holes…

While fighting off the lurkers, I found a little loot before just making a run for it. There was too much smoke, and so many bloody lurkers that I was swiftly running out of ammo. Not that I had a ton to spare in the first place, due to the nosalis attack earlier.

I made it to a tunnel and heard a child crying. Hoping it wasn’t the pipes having changed their tune, I opened the door and found a kid crying over his dead uncle, surrounded by mutant corpses. Without saying a word, Artyom convinced the child, named Sasha, to climb onto his back and let him escort him to safety. I realised as I was doing this that I hadn’t found the communications equipment to send the message, but it was too late now. 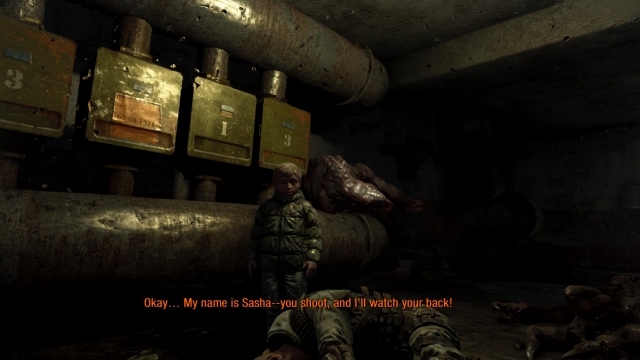 I still don't know how he was positioned behind me, but the kid's head must have been on a swivel

With the additional weight, my turning speed was slower, and I wobbled slightly as I moved. It wasn’t great (as far as combat was concerned, in the game though it was a fantastic touch), but Sasha offered to help by warning me about lurkers.

As we made our way through the tunnel, a grenade went off, collapsing the way back into Hole station. Sasha told me where to find some ammo, and warned when lurkers were attacking from behind. It was honestly a lot calmer going than when I was alone and being jumped every three seconds. The tunnel led to a drain, so we followed it, and a lone lurker scared the hell out of me before we exited into a… well, hole. There were planks leading up, and Sasha exclaimed that we could see the sky.

I worried that I didn’t have a gas mask for the kid, but climbed anyway. As we reached the top, we could hear Sasha’s mother calling out for the return of her child, and how they should return because there was no sign of the uncle. I was thanked upon returning the child, and told that Sasha was an important kid. Then I was led to where the refugees were, and told that I could exit to the surface. 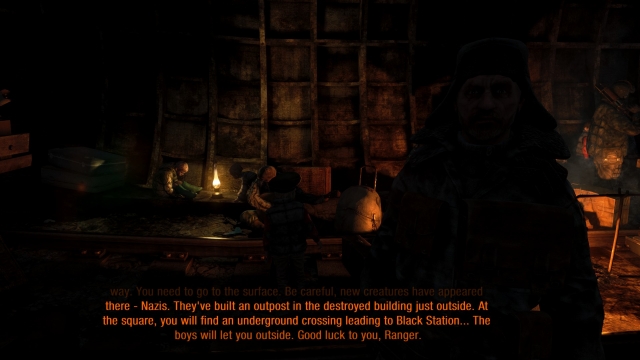 I quite liked everyone confusing me for a ranger

After buying some upgrades and ammo, I headed for the surface. Apparently there were new monsters in Moscow - Nazis…