Having arrived at the Caspian Sea and taken on a few members of the Munai-bailer gang, I had helped a woman named Guil fight off some of them in exchange for a favour…

It just so happened that Guil lived above the place I needed to get access to - the Caspian-1 monitoring station. Unfortunately, she explained that she rarely went down there due to the spiders. This did not exactly fill me with joy, more an intense dread and desire to run. However, I needed the maps that would be in Caspian-1’s archive.

With Guil safely at the top of the elevator that I had just traveled down, obstentiably to keep the power on, I began moving through the sand-filled facility. Reaching a walkway, I decided to explore and went down some stairs to the right. This happened to be the right choice, as the middle walkway collapsed. It was also, however, the wrong choice as I was attacked by two spiderbugs which ran around due to my torchlight and lighter, and I eventually managed to shoot dead. 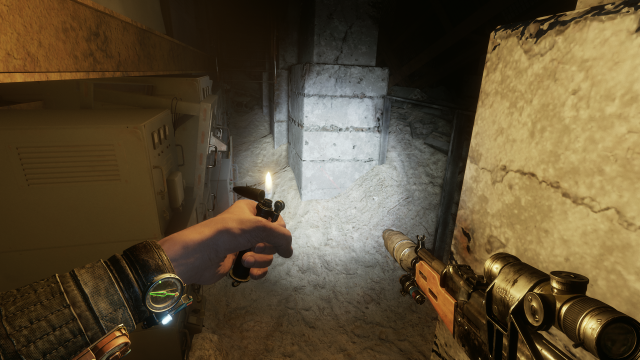 No idea how they can burrow without leaving evidence of burrowing...

After heading up the only staircase that I could reach, I entered a large office where a couple more spiderbugs kept approaching and scattering. Moving out of the light seemed to heal them, otherwise I could have just waited for them to die in the light, but I had to shoot them. Things were tense, but not horrid - so far. At the far end of the office, I found a place to power up the door I needed to go through, then I found a note from the acting commander. It talked about how he was in charge now, due to the base commander’s suicide.

Through the door, I looted the desk and found a tape deck. It was talking about how there were gas leaks being fended off by the ventilation system - but with the power failing they were probably doomed. I went down some stairs which had spiderbug holes, though thankfully none attacked me as I went down. At the bottom I found a door which needed opening - and Damir had just joined Guil, so was able to help with that. I’ve no idea how they knew where I was, but I decided not to question it. 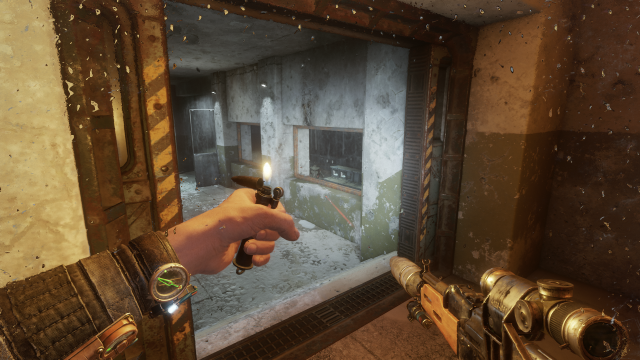 Especially as the room it opened into - which turned out to be a spiderbug-infested monitoring room full of computers - had lights. This greatly lowered my risk by making the spiderbugs scatter, though I kept my flashlight and lighter on the entire time. I even kept my gasmask on, despite an automated message telling me that the ventilation system was running fine.

Past the monitoring room, I had to go around a collapsed hallway, via a bathroom. I decided to leave the stalls alone, as I did not want to be jumped upon by a spiderbug. I came across a note dated from 2018, talking about how the radiation was forming a sediment at the bottom of the dam, so things were pretty safe. Unless the locks failed, polluting the valley worse than anywhere else.

In a room to the left, I found Guil’s mother’s corpse, still clutching a family photograph. Guil had asked me to look for signs of her mother, so I would be returning this to her at some point. There was also a tape of the mother’s voice, talking about how she had moved Guil into the lighthouse, though I had no idea how old it was. 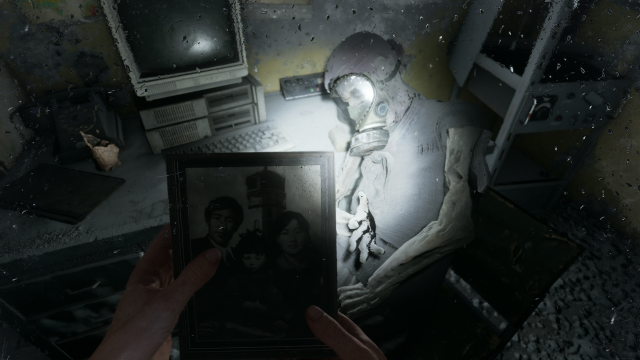 Not a great capture of the family photograph, unfortunately

After heading through a room with some more computers, the lights went out and I had to fight off two more spiderbugs. I remembered that I had molotov cocktails, and one of those finished the job. Unfortunately, my only way forwards was inside the ventilation shaft, so I crawled inside and was almost immediately attacked by two spiderbugs. I threw a molotov cocktail at one and unloaded my rifle into the second, before continuing on - where another two attacked. I shot those two and was very glad when I was soon out of the vents and, coincidentally, in the archive that I had been aiming for. 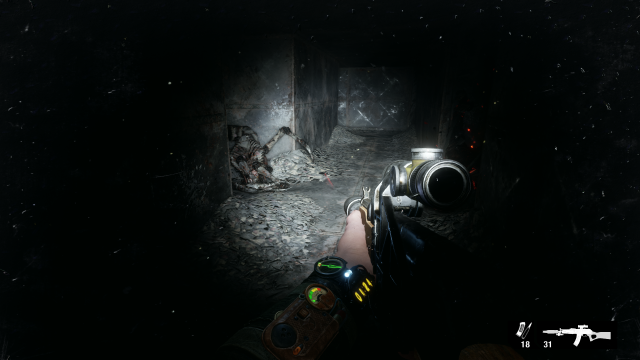 The only screenshot I took of a spiderbug

Damir came over the radio again, telling me that he had restored power and activated the elevator so that I could get out of there. As I walked down towards the 2013 files, I found a bottle of something and had the option to drink it. After doing so, I could hear some voices and things went a little wavy for a few seconds, so I wondered just how strong that was. At the end, I searched a few empty file tubes before finding some maps. With those in-hand, I went for the exit.

At the top of some stairs was the briefing room. The commander, whom I had already learned commited suicide, had written a note talking about how Caspian-1 should restore contact with the outside world, and if no word was received, should head towards the nearest clean zone. That was over 2000 kilometers away, but it was the only way to survive. The letter ended with his resignation - but from the note I had grabbed earlier, it was clear that his orders were ignored because of his resignation.

There was a tape near the door of a briefing which was interrupted by a child named Guil. In it, Guil’s mother explained that Moscow was completely irradiated and nothing could survive, and the only place that was worse hit was Novosibirsk. Opening the door, Damir told me that he only had enough power for either the lights or the elevator. Not wanting me trapped down here - as I also had the maps - he was going to turn off the lights. The doors out of the only truly safe room I'd been in so far...

With the lights off, the spiderbugs were free to roam. As the elevator was at the other side of the monitoring room from before, I had to go through it with my flashlight and lighter, and under constant attack. I threw a couple of molotov cocktails, which bought me some time, but once I had run out of those it was close before I managed to get into the elevator.

Guil and Damir were at the top, fighting off spiderbugs, and when Guil restored the lights - that was when the power began to fail. We ran across the sand towards the elevator fitted with floodlights: which is when I was finally jumped upon. I fought the spiderbug off and we quickly boarded the elevator. As the lights went out completely, Damir threw a molotov cocktail and the elevator went up.

Finally at the surface, I gave Guil the photo which her mother was holding, and she gave me something to give to Nastya when I got back to the train. Damir told me to meet up with Anna, as she was in the area which I was heading towards, but he was staying here for a bit. It was dark outside, it had been getting late when I went into Caspian-1, so I had to keep my eyes open - though Damir had helpfully brought my car around. As I drove away, Anna came over the comm asking for backup as she had seen activity at the port, so I headed for the smaller mark on my map. As I drove, the Baron came on the radio and explained that he had spoken to Miller via the radio. Miller had apparently explained that we were here from Moscow, on a mission from Supreme Command, and wanted water and fuel. In return for a reward “later”. A shrewd negotiator our boss was not.

Slowing down as I approached the mark on my map, I exited the vehicle, looked through my scope and spotted someone in the distance. Deciding to be sneaky, I checked out a small building (which had some supplies in), then snuck over to the other building. Anna was completely unsurprised by me, and told me to come look at some stuff she had found. She actually did seem happy to see me

She pointed out the crane which I had spotted on my way across the bridge towards her. Then a shipwreck, which had some prisoner transports heading into it earlier, before finally the port which I couldn’t make out. She suggested that I use the zipline on the roof to make it easier to reach the port. So, I went out and back down along the bridge to collect my van.

Along the way, I explored a ruined building and found two sleeping humanimals, which I shot before getting the van, bringing it to Anna and then climbing up to the zipline. I had some Munai-bailer to shoot...