Having survived an attack on the metro station Exhibition, it turned out to be a diversion for the Dark Ones to lure Hunter the Spartan away from the station…

Artyom was woken by his friend Eugine because I had to get to the caravan. We were leaving for the neighbouring station Riga. The caravan was taking supplies, but my reason for joining it was to use it to get to Polis, and fulfil my promise to Hunter - tell some guy called Miller what the Dark Ones were doing. I picked up a note and some supplies before heading for the armoury to get loaded up. I was going to guard the caravan, so I needed a weapon or two. As I made my way through Exhibition, I listened in to some conversations and knocked on some doors, actually interrupting a couple getting busy.

Entering an assembly area, a man told me about his sick child and asked me for something. I didn’t realise this until I was already handing over a couple of High Grade Military rounds. A short distance away was the armoury, where I was given a bastard gun (so-called because it overheated far too quickly), some ammo, medkits and a gasmask.

Into the next chamber, Boris summoned me to a handcart, and instructed me to take a seat next to Eugine. Someone joined us at the last minute, and we left for Riga. As we travelled, I couldn’t actually see what supplies we were delivering anywhere on the cart, and we weren’t escorting another handcart… 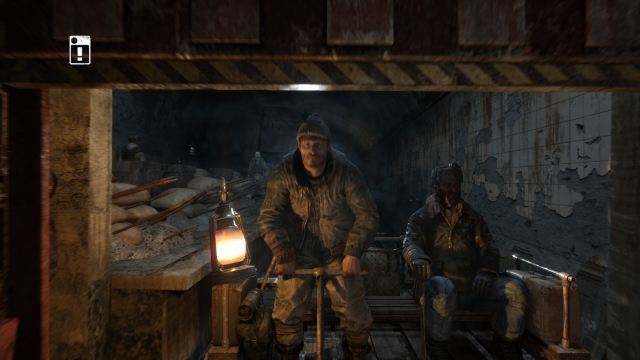 Nameless guy and Boris wore their most colourful "journeying" outfits

We reached a checkpoint, and they told us that we had to take another tunnel due to a tunnel collapse near Alexeyevskaya. So they opened it up, and we went in. Since the new guy had been pumping the cart the whole way by himself, a short distance in the guy next to me was told to pump as well to get through this creepy tunnel faster. Then Boris and the new guy started commenting about a “whispering” - and an anomaly began to chase us as they became unresponsive. I pulled the trigger on my rifle to shoot it, but there was a flash of light and I was transported to a white space.

Someone was firing at a being that I can only describe as a bulked up Grey alien (think a Roswell alien who has never missed arm day in his life), most likely one of those Dark Ones. Seemingly immune to bullets, it did something to him and he collapsed, joining a couple of other people on the ground, and then touched me. It stopped after a few seconds, then began to walk off - where it was shot several times in the back and dropped to the ground. I awoke in my seat on the handcart, and spotted some mutants at the opposite end of the tunnel, heading for us. I woke Eugine, and he began pumping the handle to get us moving, while I provided covering fire. Unfortunately, I didn’t have many rounds, and several nosalis began leaping aboard the handcart. One of them grabbed the new guy - glad I didn’t learn his name - and eventually Eugine tossed me a shotgun.

After blasting several more nosalis, Boris woke up and laid down covering fire with me as we sped towards a checkpoint. Unfortunately, a nosalis dropped behind me and knocked me down. I quickly lost my grip on the handcart and fell onto the ground, just managing to scramble into a gap for safety.

More nosalis raced after the handcart, ignoring me, so I left the hole and ran after the handcart. Bullets were flying past me, and I did my best to not take it too personally. Boris, Eugine and the men at the checkpoint called out to me, and I made it to the platform they were on just before a jet of liquid fire burst out from the flamethrower one of them was manning. In moments, the mutants were dead, and we went on to Riga for a drink. Some time later, after multiple toasts to me for saving the day, I kinda of… wandered off? Nobody said bye, and being a silent protagonist I didn’t say anything either. I grabbed some loose ammo-money and went exploring, finding an armoury downstairs, and that the station was on lockdown. It would be difficult to get to Polis in a timely manner if I was stuck in Riga.

A kid told me to pay him, and he’d take me to someone who wanted to talk to me. I decided against this, and continued exploring. I gave an injured man a bullet, and he blew a raspberry at me, making me regret it. A bit more exploring, I came across the one who wanted to speak to me, Bourbon who had to get to Dry Station. Since I was apparently immune to anomalies, he wanted me to accompany him through a back route out of the station in exchange for his AK-47. Also, it was a “cursed” passage, so it had that going for it.

Before leaving, I went back to the armoury and put a longer barrel on my revolver. On the way back to Bourbon, I met Nikki, the local prostitute from the way she asked for money with the promise of sex. Since this was Artyom’s first time away from Exhibition, of course I took her up on the offer. She led me into a cosy room a short distance away, and told me to close my eyes… 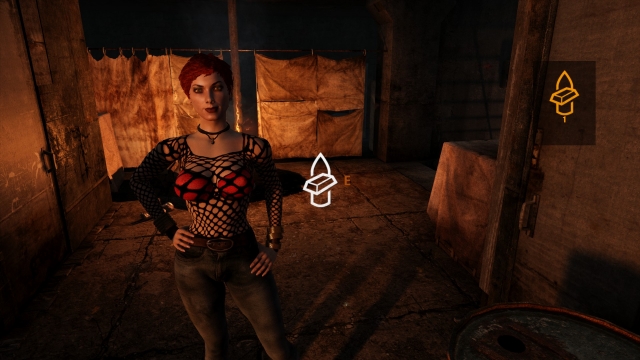 This is a good idea!

When I opened them again, a bloke headbutted me, and they both took all of my money. Some guy mocked me, when I woke, and I returned to Bourbon a little bit wiser, and much more eager to leave. He led me through to a back passage, incidentally where I had spotted a large crate and assumed he intended to lead me during my earlier exploring. As I guessed, he moved the crate, and we left Riga behind…