Having recruited Krest and rescued Anna, as well as discovered the existence of the zombie-like “mutants”, I was on my way to secure a passenger carriage for the train…

My first job was to reach a railcar that Krest had given me a breaker for. I was to use it to pull the carriage, but there was one proviso. We were waiting to disguise ourselves as a trade caravan so that we could lower a bridge, but if I was in the middle of something and the caravan arrived, I was to drop everything and head to the port immediately.

As I left the Aurora, Nastya asked me if I could find her teddy bear, which she missed ever so dearly. She also cautioned me to mind out for electric demons. Now, earlier her mother and Stepan had been talking, and it was mentioned that what we in Moscow had called demons (the flying mutants), they called gargoyles. Therefore, the so-called “electric demon” couldn’t be one of those… 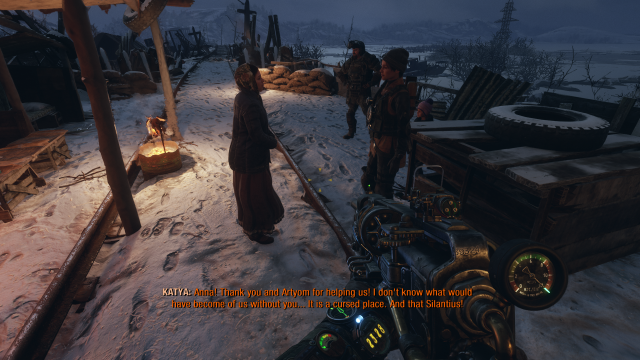 Silantius, the priest who had tried to capture me before

Walking to the front of the train, the other rangers were having a chat and pulled me over. They suggested that I speak to Duke, who was the advanced scout and whom I’d already been told to go and see if I could. They also suggested that I head over to a tower, as they thought bandits were watching us from there.

Heading down to the road, I walked a short distance before I spotted a watcher stood on top of a derailed train carriage. I shot it in the head, bringing another out, who also died to a headshot. I continued, but noticed that one of them was moving - then I realised that it was a third. I shot it - but it wasn’t a headshot. I fired a few more times, but it managed to howl. 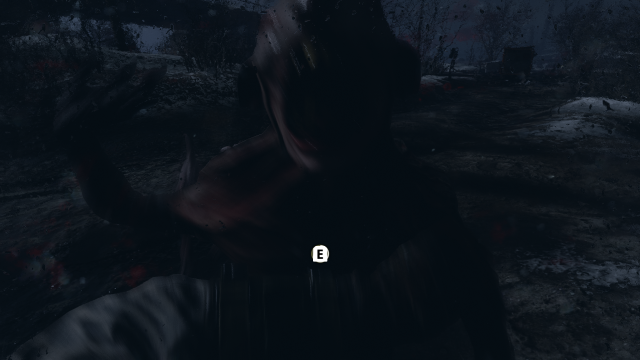 There were noises to my right, and as I turned a fourth watcher was heading for me. I shot it quickly, but a fifth and sixth were hot on its heels - and I needed to pump my gun. Amidst some rude words, I managed to pump and reload, eventually felling the two a lot closer to the Aurora than I’d previously been. With a sigh, I resumed my route, eventually finding one train carriage from the derailed train which was open and had some materials inside.

After checking my map, and looking through my binoculars, I ascertained that the tower was vacant. I went closer, when suddenly voices began speaking and I went into a crouch. Two bandits were talking to a prisoner, saying how they hoped that the ransom would come through soon. He quickly convinced them that he was worthless, and they said that they would let him go. 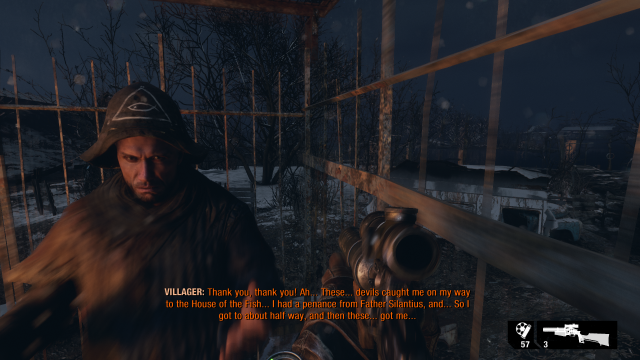 House of the Fish, a hit restauran- oh it's not?

Taking this as a sign that they were about to shoot him, I threw a knife and killed one of the bandits. It wasn’t the one I had intended, but another knife soon ended his life too. I tried to free the prisoner while a third bandit chatted to a fourth - one upstairs, the other at the bottom of the staircase, but it wouldn’t happen. So, I threw another knife at the third bandit - before a quick fourth to actually finish killing him.

The man upstairs realised that something was going on, but wasn’t concerned enough to come down to have a look. I lined up my tihar to shoot the guy in the head - and the weapon hissed. I was out of ammo, thanks to those watchers…

Instead, I went upstairs and knocked the guy out - in front of an unseen fifth bandit. I quickly shot him, but not before he had shot me a couple of times and I needed to heal. With the place clear, the prisoner called out to me to free him - better late than never.

After looting the place, I headed downstairs and freed him. For my troubles, and despite being a heretic to his faith (the cult from before), he told me where a cache of stuff was. Checking my map, I would require a boat to reach it, and after a quick check of the area, there wasn’t one. So, I set my sights on other places which I could actually reach. 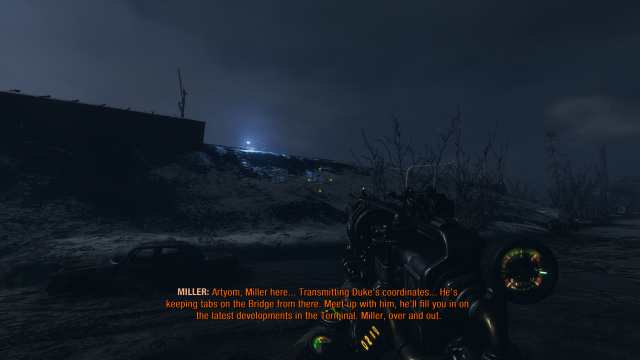 Continuing along the road, I soon came across an electrical anomaly. Perhaps it was what Nastya meant earlier - it was sparking next to a train carriage up on the track, so I ignored it. Instead, I shot a watcher. Seemingly not learning my lesson, they soon came after me and I missed what Miller was telling me over the radio while I dealt with them. The area was high in radiation, as my detector was going mad. After dashing through the area, I came across a bridge, which was marked with a big X on my map.

After dealing with some lurkers - rat-like mutants - I headed up onto the bridge and into a carriage where someone dropped down in front of me! Thankfully, it was just Duke, who told me what he’d seen around the area. He also gave the “mutants” a better name - humanimal. I crafted some ammo before letting him get back to work.

Deciding to check for a way to get to that cache to the south, I checked the river bank - where I found a row boat. After quickly crossing - because a whale shrimp was close by - I snuck towards a derelict building, where I could hear voices. I couldn’t make out what they said, so I crept around to check if I could make out anyone. After spotting someone moving up in a sniper position, I got out my sniper pistol and shot him in the head. It bounced off of his helmet, alerting everyone as he shouted out in surprise.

Thankfully I was hidden, and they had no idea where the shot had come from, but they were watching out for me. I managed to snipe one without being spotted, but when I went for the guy up top again he saw me. Honestly, it wasn’t a frantic firefight, and before I knew it the one remaining guy was calling out that he surrendered. Though I couldn’t see where he was, I started checking for loot and ammo. 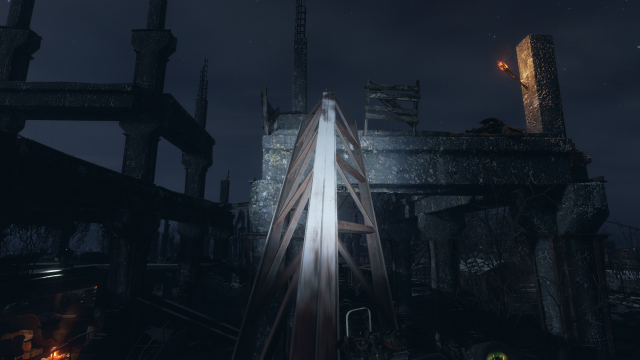 This place was dark as night!

Eventually I located the guy, up a floor with his hands up and on his knees. Unfortunately, this whole place didn’t appear to be what I was looking for. The cult cache must have been at one of the other marks on my map, which I would now have to head for…