After a very busy night, which ended with Damir and me stealing a water truck, I had just closed my eyes for a well deserved nap…

Waking up slowly, I could hear the gentle sounds of war. Stumbling out of the truck, still groggy from sleep, I found the Rangers in a pitched battle against the Munai-bailer. We were apparently joined by Guil, not that I could see her with all of the dust being kicked up by a sandstorm and the ongoing firefight.

It was tense going, and I went through three health stims before the raiders were all dead. Miller called for us to gather while someone checked that everyone was dead - I looted all of the corpses before joining the others. Apparently this wasn’t the big attack that I had presumed, merely a “hello” from the Baron. 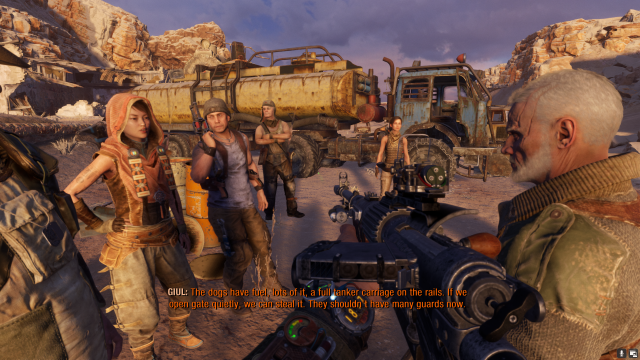 I honestly love the outfits in this game

Everyone was to prepare to leave - except for me, Damir and Guil who were being sent to steal a tanker of fuel. Apparently, the Minai-bailer were away from their base, and as such would be unable to stop us. I walked around listening to people talk (Nastya was happy to have a belly full of water!), then cleaned my weapons and made some ammo. That done, I headed to the car.

Damir told me to rest, and that he and Guil would check out the tanker. As I had not long woken up, I decided to go on ahead instead. I hopped into the car and drove over, stopping for a few seconds to double-check that I was on the right road. As I approached, Damir radioed to tell me to meet them just ahead. I have no idea how they beat me there, and I have even less of an idea how they had apparently already scouted ahead! Go not through? Some of the subtitles are sketchy

They led me down a slope to a grate which would lead into the prison cellar. It was where the slaves were kept, so Guil asked me not to kill any of them along my way. Damir lifted the grate and I slipped beneath it and into the sewer.

A couple of men chatted in the tunnels ahead, and I tried to extinguish the light sources to keep them from spotting me. Doing so somehow alerted a sleeping man, and I skulked back into the shadows until he settled again. Sneaking up some stairs, I knocked out another man - who promptly fell onto another man making him call out in terror about the “dead” man. I jumped down and tried to silence him, but I had no option to knock him out. By that point, some more men were shooting at me. I killed them, but left the terrified man alone as I continued along my way, past some kennels.

Through a door I reached the sleeping area, where there was also an ongoing dogfight. Very carefully, I sneaked my way around the long way, though I managed to make some sound and alerted four of them. It was cagey, but I remained hidden. One man, however, who had been sat at the biggest bed, came close to me and I had to knock him out before exiting.

Now outside, I approached some stairs and overheard Damir in a bit of a scuffle. He resolved it before I got there, however, so I looted the bodies while he told me that Guil had disappeared. Also, the gate was locked, from the office at the top of the oil rig - which had a face modeled into it like a supervillain’s hideout. 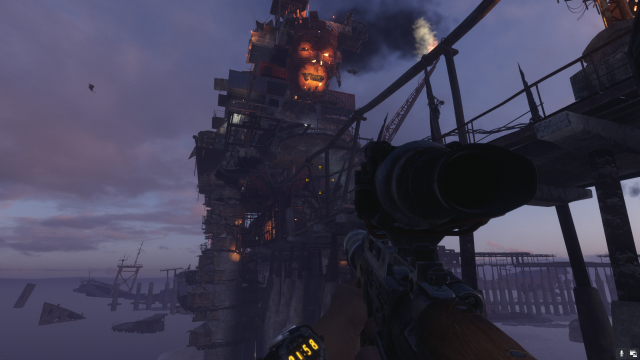 The Baron called down through an intercom or something, asking me up to the tower - where Guil told us she was waiting with a plan. I put my gun down and entered the elevator, heading up. If I didn’t raise a stink, they apparently would leave me alone, so for the moment I believed them.

At the top was a workshop where a bunch of men were working on cars, and someone was working on a suped-up truck for the Baron. Upstairs there was a bar, and further was another bar with a pole dancer. In a room to one side, two women were talking about how the only way to succeed in life was to spread your legs and hope you got a decent payout at the end. As I had been coming up the stairs, there was another slave about to get beaten in another side room. Slave life was not a nice one… 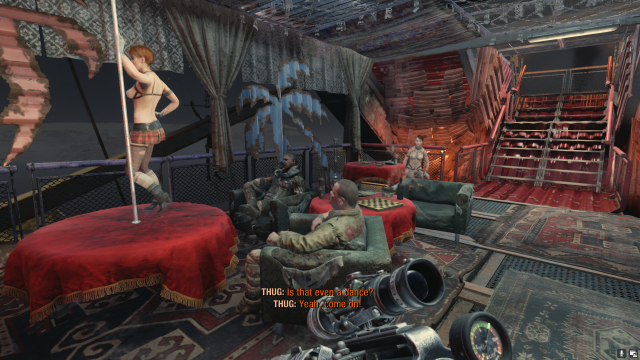 At least they had palm trees!

Further up was apparently the brothel, though I didn’t see much of that. Just a woman in a bathtub, one sat having a drink and a third who had apparently drunk “The Baron’s water!” and deserved to get beaten. I had the option to stop it, but I didn’t want to fight my way to the Baron’s office, so I didn’t.

At the top, I was told to go inside. The Baron was sat on a throne, with a woman on either side of him. There were a handful of other women as well as armed guards, but I was beckoned in. The Baron took me outside to show me “the view”, and told me that we could have all the fuel we wanted for our journey, if we handed over Guil. Then he offered me a drink, with a gun in the face. I didn’t have time to wonder if he was about to have me shot or forced to drink, as Guil attacked.

We fought off a wave of men, before Guil went off to find a way into the room which the Baron had locked himself inside. I then had to fend off more waves of men myself, though it wasn’t too dicey. Damir joined me, and together we bashed through the door to find the Baron holding Guil over the edge of the oil rig. If we shot him, he’d lose hold of her. 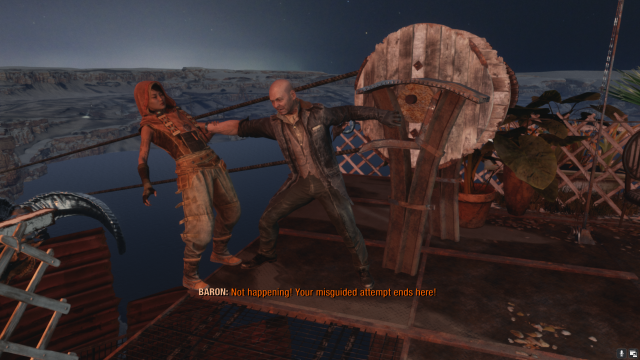 It was a good plan - unless she held onto the rope?

The choice was taken out of our hands as the oil rig rocked with an explosion. The Baron did indeed drop Guil, but she grabbed onto the edge of the floor. Damir helped her up while I tangled with the Baron. I say tangled, I mean “got clobbered and then throttled”. Thankfully, Anna told me that my head was in the way - then shot the Baron with her sniper rifle.

More explosions rocked the oil rig and Guil thanked me for my help, but she was staying to save her people from anyone else taking the Baron’s place. She ran off back inside, and Damir told me that he felt his place was here helping Guil. He clipped me onto the zipwire and pushed me off, where I landed in Anna’s waiting arms. Together, we watched the oil rig explode. 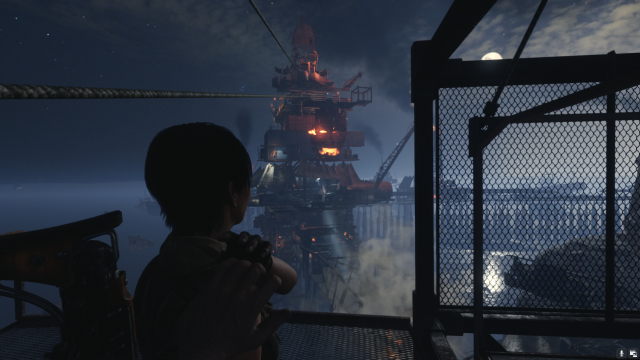 The most romantic of sights

Some time later, we finished fooling around in bed aboard the train and were watching the scenery pass. Clearly we hadn’t been accosted in the meantime, and had left the Caspian Sea far behind. There was a knock at the door, and someone told us that food was ready, which prompted Anna to get her top on. However, we stayed in the room and I listened to her talk about her past, how her mother told her about wanting to leave Moscow and live in a village by the sea, before taking her own life.

Once she ran out of things to say, I went to the radio and scanned through the frequencies. There were a couple of men talking about a meeting that “that Damir guy” was calling, having replaced the Baron. There was also a recorded message from Damir about how the meeting was a ploy to get everyone in one place to kill them and free more slaves. The next message was from Guil to the slaves, a call to arms. Finally, there was chatter between two mercenary groups about joining together against one of the sides at the aforementioned meeting.

After putting on some music for Anna, I left the room and almost collided with two of the guys on their way into the dining area. It was a celebration, as Stepan had asked Katya to marry him! Once Anna joined us - having hung back to rest some more - Miller told us the plan. After six months on the rails, we were heading into a valley area where we might be able to call home. 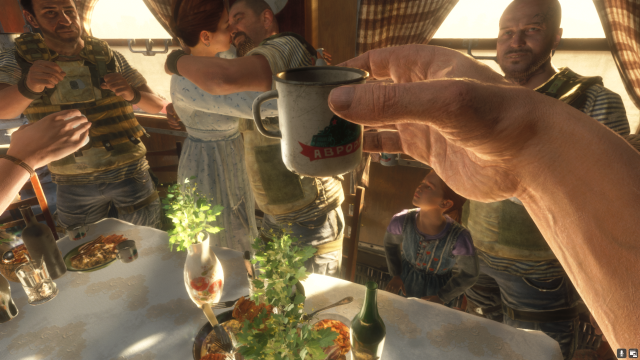 He then carried out the wedding ceremony, such as it was. Everyone was happy and had a drink. Then Anna coughed up blood before collapsing.

Everyone was, understandably, shocked and concerned. The doctor at the cannibal mountain Yamantau had apparently told Anna that her lungs were melting due to her exposure to gas. While she was unconscious after falling into the silo outside Moscow, before I had reached her, it had allegedly done her far more harm than good. 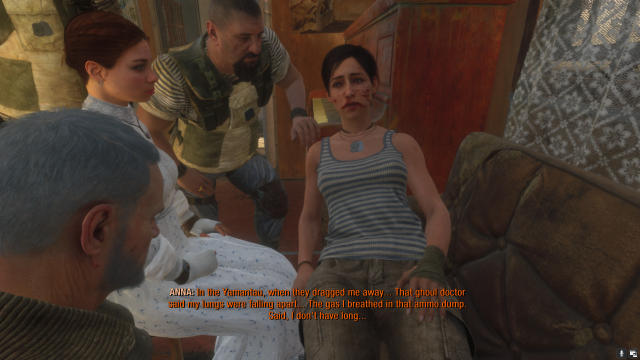 Maybe he wasn't about to say "explosion" but "exposure"...

Miller told Katya and I to join him in the train’s bridge, and asked why the gas hadn’t affected her apart from a cough, until now. Katya said that if the forest air in the valley didn’t help, then she knew of a drug that might. It was two thousand kilometers away, though, so less than ideal.

Miller decided that we would continue on to the valley, and if Anna didn’t improve he would lead some of us in search of the medicine. For now, I was to lead a scouting mission ahead into the valley, to check on conditions before the Aurora arrived.

Later, Alyosha and I drove Krest’s railcar into the valley. It was a beautiful area, especially compared to the radiation-covered areas we’d been in up to now. The condition of the tracks, however, was awful and Alyosha told Miller to take “the other tracks”. That would delay the Aurora as those tracks required repairs, so we would head to meet them at the dam. Unfortunately, a rockslide had other ideas. It destroyed the tracks just ahead of us, giving neither of us time to escape. I was thrown into the water and dragged away by the current. I had to abandon my backpack to keep afloat, but was soon slammed into a rock and knocked out, slipping beneath the water…