Having made my way to Polis and been denied aid, Miller helped me reach a nearby library to try and find some information on the D6 missile base instead…

There was no doubt now that I was in the basement, and from the looks of things heading for the sewers. I slowly made my way through the area, avoiding the two librarians even as one of them went away. I was crouching, and intended on remaining crouched unless I needed to run.

In the next area, a librarian was trying to grab a nosalis that had invaded the area, so I just avoided it and made my way up and around an elaborate series of planks and pipes, to a staircase. Into a ventilation area, a librarian knocked through a grating to try and grab me, probably assuming I was a mutant because it quickly stopped grasping and allowed me on my way. 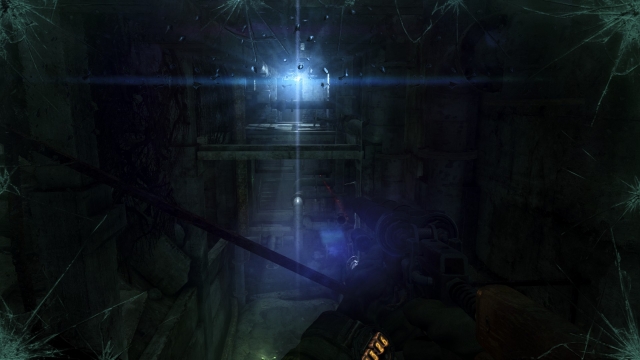 Down another metal staircase, I had to drop and very carefully navigate my way around a series of sleeping librarians. They must have been using this area exclusively as a sleeping zone, because I passed by multiple snoozing librarians, and much to my surprise I didn’t step on any or shoot them by mistake.

Eventually, I found myself back inside a building, which I hoped was still the library. I knew it was big, but I also didn’t know exactly how far I had traveled. Luckily, it just so happened that I was in the exact place I needed to be! After looking through several drawers in a filing room and flinging random bits on the floor, a big red folder in a drawer labeled D6 was perhaps a bit more on the nose than I expected it to be. Within minutes, I was outside once more. 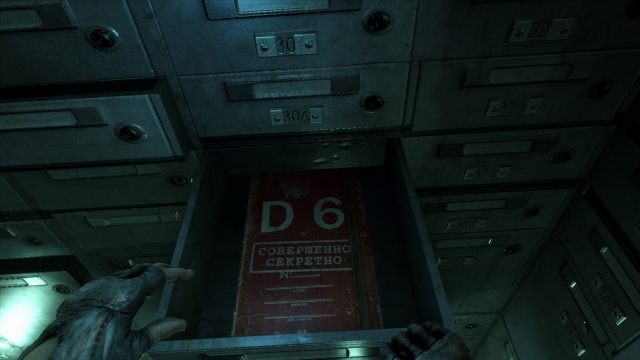 Hmm, I wonder what this is about!

Obviously, that’s when a librarian jumped down ready to eat me. Thankfully, it was quickly ran over by Miller and one of his men! Apparently my old friend Khan had told them exactly where to find me - I could only assume the ghosts told him, because I was honestly nowhere near the front doors of the library. We all loaded into the truck they had killed the librarian with, and headed for Sparta, the only surface-based outpost that was held by friendlies, and was located inside a church.

Miller told me to have a look around while he checked the D6 documents, so I did so. A guy called Vladimir allowed me to upgrade my weapons and restock my ammo for free, so I certainly took him up on that. Upstairs, Khan spoke to me, something vague about war being a circle, but then said he had to go just as the wall whispered to him. 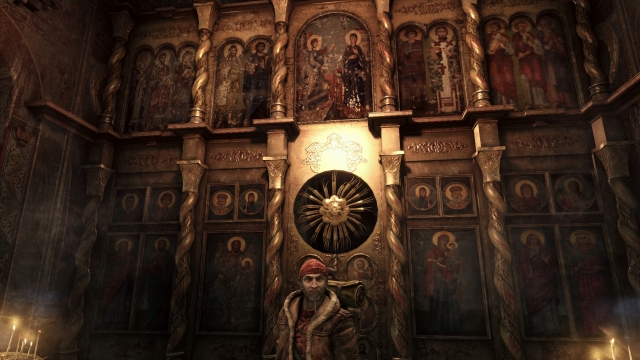 To be fair it's an impressive wall

On the other side, next to a map, was Miller who told me that he had finished checking through the notes, but they only really told us how to reach D6, and not much else. We readied up and headed to the dungeon where a rail transport was waiting for us. Miller said that, out of the ways to D6, the one we should probably take was through Kievaska. While the men talked about the tales of the station, something came over me and I felt faint. It passed quickly, but I thought that I was about to be taken into another anomaly vision…

It happened again, this one flooring me and taking me into a tunnel lit by a bright white light. A voice bid me to “walk on”, so I did. There was a woman, but she disappeared, to be replaced by the silhouette of a Dark One. Behind me, there was the outline of a human, ahead was a Dark One. I approached, and behind it a few more lined the tunnel. Miller called my name, but I continued walking. Suddenly, the vision vanished and I awoke. 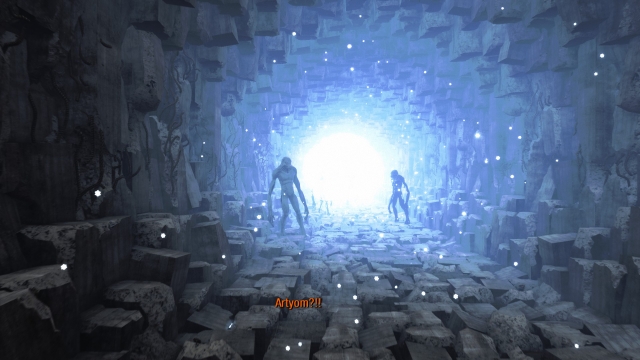 Honestly? No idea why I chose to walk towards them

The rangers seemed concerned, but we had arrived at our destination and they quickly forgot about it. The airlock controls were damaged, so while Vladimir tried to open it, we had to defend against a bunch of nosalis. Luckily, I was told to grab the huge flamethrower, and used that to fend them off. Unlike past battles, this went pretty well due to the rangers actually being proficient in the use of firearms. However, an anomaly came floating towards us. I tried to leave the transport, but was unable to, and fire had literally no effect on the glowing ball of light. The airlock opened and the transport chugged through it, the door closing behind us and causing the anomaly to burst against it. 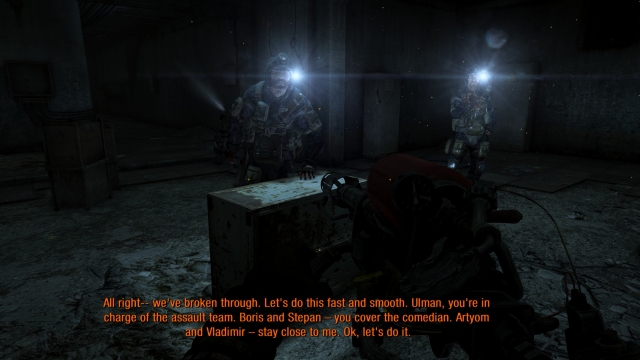 Out of the five rangers, I'd met two of them previously - this didn't look good for three of them...

Leaving the transport behind, we went in through a nearby door, and I was told to flip a breaker. I expected to be jumped by a mutant as I powered up a nearby switch, but nothing happened even as I flipped the breaker. Ulman kept making jokes even as we walked into an obvious trap, where mutants fell from the ceiling to attack us. They were easily dispatched by the others, however, and we went on to the next big door.

It opened and we went through into another ambush, this time with more of them. I broke out the flamethrower and set some of the nosalis on fire to great effect. Another door, some more nosalis, and then to a final door which I was expected to open. I pulled the handle while the rangers watched my back - but something came from above and distracted them.

A nosalis came under the door and jumped me. Boris, one of the newcomers from Sparta, kicked it off and shot it, but was grabbed by another nosalis. It dragged him through the door and there was an explosion, which I could only assume was him blowing it up, killing himself in the process. To be fair the grenade didn't do too much damage

Stepan, another newcomer, and the other rangers mourned Boris before resolving to continue the mission in his name. Vladimir bypassed a door’s controls and we went down some stairs, where we were greeted by a horde of nosalis. We fought them off and ran for it, finally locating the door to D6 - which was locked. The guys opened a blast door next to it, and I slid under before it snapped shut leaving me in a room with pulsating egg sacks and a skittering sound…