Freebie Feelers is a series where we download the free monthly console-specific or newly released free-to-play games to test their worth.This series will contain some useful information as well as plenty of personal opinion. While these articles may not be reviews, we hope that you will be able to use them to help decide whether that free download is worth it.

Released in 2015, Just Cause 3 follows the adventures of Rico Rodriguez as he returns to his home island of Medici, to overthrow the dictator who orphaned him. Quite why it took so many decades to get around to returning is anyone’s guess. Given how dodgy The Agency is at the best of times, you can imagine that they’ve only allowed it now for their own ends. In any case, you have to go in, and blow stuff up until the Mediterranean republic is free of tyranny. What did you think?

I loved the heck out of Just Cause 2, using a grapple and parachute to travel miles in minutes. So, they added a wingsuit to Just Cause 3, to allow you to fly those miles in minutes - or less. However, the world feels emptier, probably because it’s made up of a few islands instead of a big island surrounded by water. You spend a lot of time flying or in a boat going from island to island which is quite disappointing. When you’re travelling around the islands themselves, at least there are things to do: a kidnap here, a rescue there… The story is pretty generic, but then so are most of Michael Bay’s movies. Just Cause 3 basically has the same draw that they do: big explosions and lots of guns. 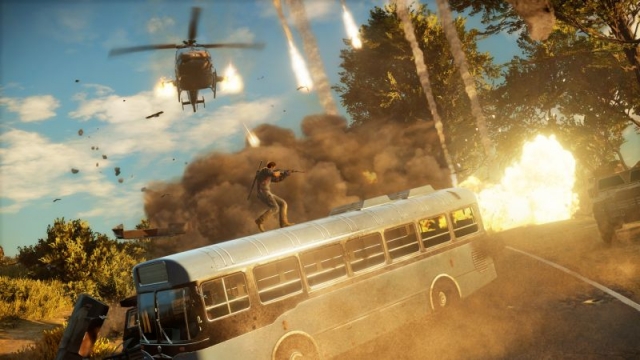 Is it worth downloading?

With it being free on PlayStation Plus at the moment, down from £44.99, yes it definitely is. Even if you only spend a few hours blowing things up and flying face-first into mountains, you’ll have gotten your money’s worth.

Just Cause 3 Now Has Multiplayer Mod