Whatever Happened To... Army of Two?

Launching in March 2008, Army of Two began life as yet another third-person shooter, using cover mechanics. It had tight controls for the time, but it had (an army of) two key selling points. The first selling point is the large amount of customisation. You could change your mask, allowing you to add a little spice to how your version of the characters looked. You were allowed to change various different parts of your weapons, changing how they feel, how large of a clip you’d have, or even adding a gun-shield. This allowed players to rock through the game with their own flair and increased replayability. The second, and arguably more important feature, is the co-op focus. Multiple times throughout each level, you’ll be prompted for a co-op action. Sometimes they’re based around traversal, such as lifting your partner over a gap, sometimes a co-op sniping situation could occur, or most importantly, you could go back to back. Back to back allows both players an infinite amount of ammo, allowing you to slaughter everyone in your path.

Army of Two: The 40th Day arrived in January 2010, and brought across and expanded on the features of the previous title. Customisation shot up, adding even more options for your guns. They also added the option to design your own mask via their website, virtually adding an unlimited amount of masks you could play through the game. While the first game had some humorous writing, Army of Two: The 40th Day doubled down on this, adding some true charm and more than a few laugh out loud moments. I’ve spent far too many hours messing around with a friend playing through this game and it sits in a fond part of my memory.

So what happened to Army of Two? In the minds of fans, it only ever had two games and then blissfully passed on from this world. But in the real world, there was a third. The evil sibling that nobody wants, that ends up murdering the entire family. Army of Two: The Devils Cartel. 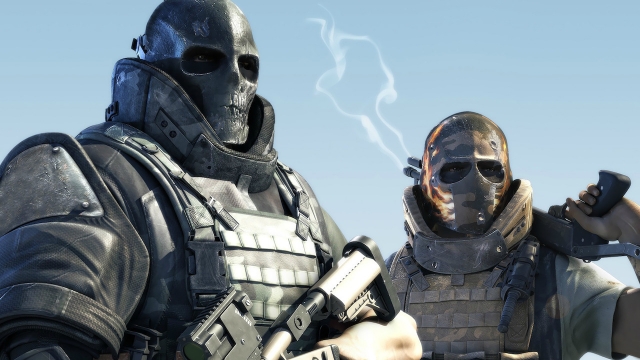 Launching in March 2013, Army of Two: The Devils Cartel was meant to be more of the same, but it lost its soul along the way. Crazy customisation was gone, to a degree, with there being an emphasis on realism. Mask customisation was added into the actual game, so there was no need for an external site and even more developer-made masks were added into the game for players to purchase. So far, sounds very similar to the other two entries, so what killed it? Mostly the removal of co-op interactions.

You see, co-op interactions were what set Army of Two apart. It allowed players to have varied experiences depending on which character they were playing. Sometimes you’d see slightly different areas of a map, sometimes you’d lay suppressing fire with a sniper rifle as your teammate stormed a building. It allowed you to create experiences. This coupled with the tone changing to a more serious edge, swapping out of the previous main characters and a lack of standout set pieces ultimately resulted in Army of Two: The Devils Cartel receiving mediocre reviews. The series had never achieved great scores and was always seen as a B- tier game, but the removal of fan favourite features caused the game to only manage a measly 260,000 copies worldwide. Ultimately, poor sales and bad fan and critic reactions buried the Army of Two series.