Has there ever been a point when you’ve looked through your gaming library and wondered, “Huh, whatever happened to this title?” Well, I’ll be taking a look at videogame standalones/franchises and the lead up to their eventual absence. With that being said, today I’ll be asking the question: “Whatever Happened to… Star Wars: 1313?”

Cast your mind back to June 2012. Rumblings of a mature Star Wars game were trickling through the presses. Traumatic Star Wars: Episode I – The Phantom Menace flashbacks started to creep its way into the minds of a few fans, but some were beginning to believe. LucasArts took the stage at E3 and the rest is history.

Star Wars: 1313 was unveiled and was set to bring balance to the force. Taking place on Coruscant, you were going to play through the game as an unknown bounty hunter (originally anyway) as you traverse around level 1313, finding exotic weapons to make your journey easier. From the trailer that was shown, it was clear LucasArts had been inspired by the Uncharted series, as there was a clear emphasis on traversal as well as gunplay, with the trailer showing off both, as well as some impressive set pieces. Star Wars: 1313 looked promising; it had been 10 years since we’d had a bounty hunter game, and fans were excited. So what happened?

Master of his own domain, George Lucas, had some hand in the downfall of Star Wars: 1313. Originally Star Wars: 1313 was set to star an originally created character as the bounty hunter, allowing LucasArts the freedom to do whatever they wanted with the character. Unfortunately, there’s already a bounty hunter in the Star Wars universe and, possibly to the detriment of Star Wars: 1313, he’s also a fan favourite. His name is Boba Fett. See, George Lucas decided that the bounty hunter should be Boba Fett, but instead of making that decision during the early days of game development, he mandated the change two months before the reveal at E3 2012. Good job LucasArts hadn’t paid voice actors and hadn’t written a story based around this character, right?

While changing the premise of Star Wars: 1313 after much of the initial work had been done wasn’t the final nail in the coffin, it certainly wasn’t a good thing for the game or the studio. After the president of LucasArts quit the company shortly after the E3 showing, a hiring freeze was put in place. The death bells began to toll as news of Disney acquiring Star Wars as whole began to loom. The house of the mouse was about to douse the fire in the fans belly that was Star Wars: 1313.

You would assume that a literal giant of the entertainment industry would see the fan’s excitement for a new Star Wars videogame and understand that it’d be a money-printing machine, but the idea of a mature property in their newly acquired IP clearly didn’t sit right. LucasArts was closed in April 2013 and the trademark was abandoned for Star Wars: 1313 in January 2014. The project was dead, along with all of the extended Star Wars universe, including books, comics and other videogames.

While Star Wars: 1313 will likely never see the light of day, thankfully we’ve been able to experience an Uncharted-esque Star Wars game via Star Wars Jedi: Fallen Order. It’s not the bounty hunter game that fans were clamouring for, but it is a fantastic set-piece laden adventure with an original character. We may never get another bounty hunter game, but maybe other studios can take inspiration from what could’ve been and bring us more excellent tales in the Star Wars universe.

Prev
Whatever Happened To

A Trip Down LucasArts Lane

Read the full “Whatever Happened To” series
First
Prev 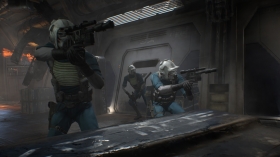