Has there ever been a point when you’ve looked through your gaming library and wondered, “Huh, whatever happened to this title?” Well, I’ll be taking a look at videogame standalones/franchises and the lead up to their eventual absence. With that being said, today I’ll be asking the question: “Whatever Happened to… Darkwatch?”

Ah, the month that was October. A month of horror, mystery, and, oddly enough, Canadian Thanksgiving. It seems like only yesterday when people started gearing up for the month's most famous celebration. A night of the year where ghouls, goblins, and a bunch of incredibly irritating people dressed up as that goddamn clown from It will be both literally and metaphorically wandering the streets. Yes, I speak of none other than Halloween, the one true day of the year where I can still enjoy myself by sitting down and watching terrible slasher films from the '80’s. It’s not all about the flicks though, as there are several scary games that make their way into the frame as well. Some more notable gems out there include F.E.A.R, Resident Evil (the early stuff anyway), Outlast, I Have No Mouth and I Must Scream, Silent Hill, and, more recently, The Evil Within 2. If anything, the titles listed prove that the horror genre has been a staple of gaming for years and it shows no signs of slowing down. With that being said, although there is a wide variety of games to choose from, what makes for a solid, well-rounded horror title?

Well one such standalone that comes to mind is the High Moon Studios developed title Darkwatch. For those who aren’t sure, Darkwatch found it’s way onto shelves in 2005 and was branded as a steampunk, horror shooter. The story revolves around a vampiric outlaw by the name of Jericho Cross (still one of the coolest names in gaming) and his work with an order of vampire-hunters known as Darkwatch. The plot is fairly straightforward, but the ending goes with the moral choice route, with there being two endings for the player to choose from. The gameplay was where things were a bit more unique. The structure of the game chose to capitalize on Halo’s successful design, but the various powers/abilities that players could accumulate were what helped set the two titles apart. Darkwatch went the inFAMOUS direction before inFAMOUS was even a thing. Decisions that you make throughout the game’s story allowed one to have different abilities depending on if they were good or evil. Evil powers were typically more strength-based and did more damage, while good powers had a more defensive aspect to them. Regardless of what powers you received, the moral decisions were an interesting feature that helped players decide how they’d go through the game.

Another interesting feature was the day and nighttime levels that Darkwatch provided. During daytime segments, Jericho’s abilities would no longer be available. This would make the player resort to the standard weaponry that Jericho had acquired, such as his trusty revolver, known as the Redeemer. There were also different variations of levels through the game, some examples being on-rail sections and boss battles. 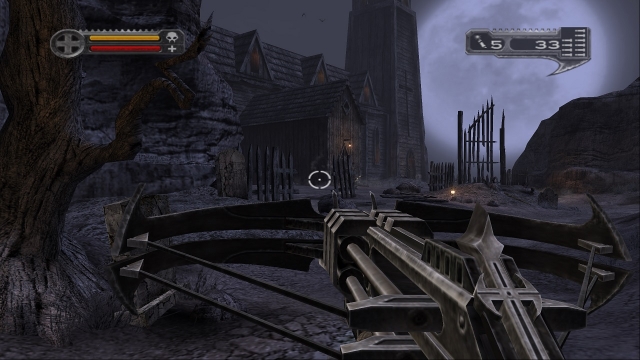 The last thing I’ll mention is Darkwatch’s multiplayer aspect, one that was recieved fairly well by fans and critics for its fast-paced cathartic feel. That being said, though, despite there being multiplayer, it changed depending on which systems you owned. On the Xbox original, players had the ability to play while connected online in large competitive matches. On the PS2, players had the option to play split-screen co-op throughout the campaign, but were unable to take part in the online community. Now, in theory this meant having something for everyone, but in reality it seems more or less like a marketing decision that promoted the idea of console bias.

So with all that taken into account, I believe High Moon Studios did design a well-rounded gaming experience, one that certainly wore the mask of horror. Whether it was the varied gameplay mechanics, the simple yet effective storytelling, or the different multiplayer aspects, Darkwatch was a title that hit all the right notes and then some. So why haven’t we seen another one? Well there were supposedly multiple games pitched that would’ve made a series out of the inevitable standalone gem. The most recent news of a sequel came around 2007 when High Moon Studios did testing for a possible installment on seventh generation consoles. These plans were scrapped however and more time and effort was put into the Deadpool game instead. Unfortunately, it looks as those Darkwatch’s potential will never, truly be tapped.

So there you have it, that’s what happened to Darkwatch.