Whatever Happened To... Mercenaries?

Hey everyone! Has there ever been a point when you’re looking through your gaming library and wondered, “Huh, whatever happened to this series?” Well, I’ll be taking a look at videogame franchises and the lead up to their eventual absence. With that being said, today I’ll be asking the question: “Whatever Happened to Mercenaries?”

As we all know, there are open-world sandbox style games, see Mafia series. Following these are open world shooty, bang, fun games, see GTA series. After that, there’s the incredibly chaotic niche of open world ‘everything must go’, explosion extravaganza games, see Just Cause. To put it fairly straight forward, Mercenaries is very much in that comfortable niche of destruct-em’ ups. If you’re not firing an RPG at something, driving a tank into the heart of enemy territory or hijacking a helicopter only to have it crash later, then you’re not playing Mercenaries right. It also has Peter Stormare! But I digress, the series itself began in 2005 on the 11th of January with the official release of Mercenaries: Playground of Destruction. Not quite a symphony, but I guess Megadeth had already called dibs. Playground of Destruction was received very well, being boasted by newcomers and critics alike. With a destructive personality only seen in previous games such as Red Faction (2001), Mercenaries would quickly garner a fan base that enjoyed a sense of stylized violence. Actually, I say stylized, but the violence in-game is about as stylized as you want it to be. It can range from a wide variety of scenarios that would have any number of parents wide-eyed and cursing where they went wrong with their children.

Following the release of the first game, it would be three long years before the eventual release of the widely acclaimed sequel, Mercenaries 2: World in Flames. The main premise of this title seemed to be, ‘if Mercenaries didn’t do enough for you, Mercenaries 2 will finish the job’. And finish it did. I have fond memories of driving a jeep through the streets only moments later to be hunted down because I accidentally nudged a barricade and the guards needed something to be cross about that morning. Mercenaries 2, despite some glaring issues, really did make for a fun and anarchist style of gameplay that, in reality, we’re finally starting to see more of *cough* Doom *cough*. 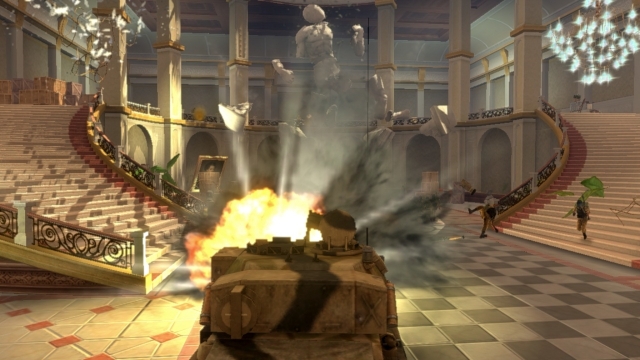 So what happened to it? Well unfortunately there was not just one, but two cancelled versions for a third installment in this series. Both were shut down because of studio errors or the studios being errors themselves and overall, that’s really disappointing. I sincerely hope that the license for Mercenaries gets picked up and put to good use. It’s a fun experience and one that I believe would truly do well in today’s market. With all the Everybody's Gone to the Rapture’s and Papers Please, it should be noted that videogames can lighten up a bit and have some fun with gratuitous amounts of explosive action. And before people speak up, all while remaining offline. Until next time!

I never played this, but I remember the advert music for the second one sounding cool.

They're a great pair of games, I really hope there's a remaster or sequel in the near future.