As someone who has never been interested in the competitive multiplayer aspect of games, I have let a few franchises pass me by. One of those is, obviously, Battlefield. However, with the release of Battlefield 1 last year, and the apparently strong single player campaign, I figured it was about time to take a look at the series. Since I have this compulsion to play every game in order (to avoid missing in-jokes and call-backs), I went through all of the games to experience just the single-player aspect. So, bear that in mind if you want to argue about multiplayer -- I have only played, and will only play, the single player stuff.

The first Battlefield game to have a campaign, I had to play the PlayStation 2 version, as I don’t have an Xbox and my 360 is on the fritz.

War is brewing in Kazakhstan, so NATO are sent in to help. Also China and Russia. 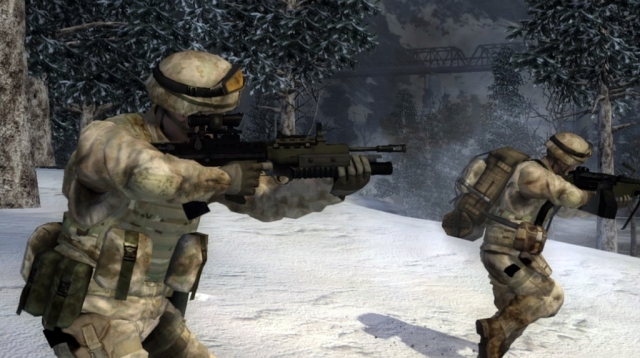 Story:
The story is not very compelling. It’s just a case of “Go here and do this because those are your orders.”, over and over. The missions are varied, but never interesting enough to be “story”.
Characters:
There are no characters. You take over different soldiers either at will, or when you die.
Fun Factor:
I’ll admit it’s kinda fun to whizz around the buildings from one perspective to the next, but the soldiers are pretty much identical in loadout so there’s little reason to do it. Outside of avoiding a points fine for dying. The fact that this mechanic was the most fun aspect of the game is very telling...

As this was the first Battlefield game I played start-to-finish, the cold open in Japan made me expect a very different experience.

When Private Marlowe’s company is pulled into a Special Activities Division operation, a secret from 1944 threatens to destroy America.

Story quality:
It was a tad generic, and ended on the hook for Bad Company 3 -- which will never come. I saw every story beat coming a mile away, even guessing the fate of the pilot from his first appearance.
Characters:
Marlow is the definition of bland protagonist, and I don’t think he even spoke until the third mission. In fact, every character is a generic archetype -- the Texan only agrees to the suicide mission to save the Dallas Cowboy cheerleaders. Still, they were fun, at least.
Fun factor:
The combat is challenging, but never too hard, which is a definite plus in a war game. I love that parts of the environment could be destroyed, but that’s likely not just the single player. Another plus is that the game makes you try out new weapons all the time, which I enjoyed, but I tended to stick to the sniper rifle.

I played this back on the Xbox 360 years ago, but only just past the cold open. I kept dying because I was trying to Duke Nukem it and wade into battle, something I’ve learnt not to do in the intervening years.

In an attempt to stop a nuclear attack, Sgt. Blackburn recounts the events from Iran that led to his being in New York, and under investigation… 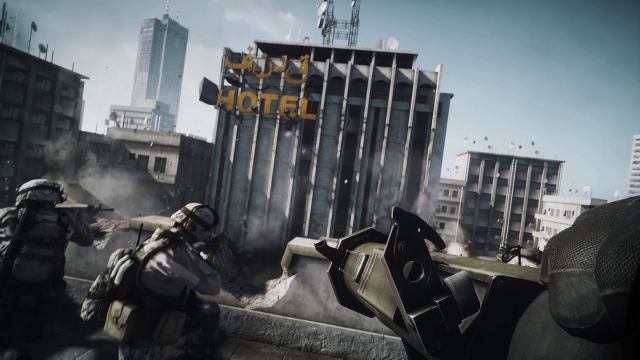 Story quality:
The framing device was annoying, as I’m still not certain who Blackburn was talking too. However, it’s a fairly good story with a clear objective and some twists, so I’m pretty happy with it.
Characters:
Blackburn doesn’t appear to have a specialty, but apart from that, he has a layered motivation that felt quite real. It’s a pity that the rest of the characters were pretty bland.
Fun factor:
There was quite a bit of variety to the missions, with tank and jet levels scattered around the sniping and street-level conflict. However, it would have been more fun to have more than one section in each vehicle, and the constant dirt on the “camera” and lens flare really ate into my enjoyment.

Released two years after the previous title, and given the familiar ‘bloke in front of a city’ stylings of the game, I could only assume this was going to be more of the same urban warfare.

A routine asset retrieval from China leads to an all-out battle between American and Chinese forces, with Sgt. Daniel "Reck" Recker and his Tombstone squad right in the action. 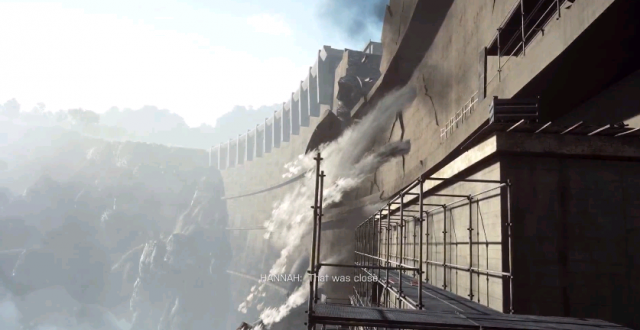 Story quality:
It takes place after Battlefield 3, because you meet characters from that. As soon as I realised that, I was very glad I played this series in order. From the opening narration, I expected to be fighting the Russians again, so was happy when that wasn’t the case -- at least not the whole time. The story was decent, but seemed more concerned with setting up set pieces and ignoring the characters.
Characters:
A faceless and voiceless protagonist who’s in charge of the squad -- yet has no input into decisions. Pac has some interesting character moments, but Irish is a constant annoyance as he ignores orders and is a general git.
Fun factor:
There are a lot of great set pieces, but it’s never really more than running away from something to fight a ton of people. At least the ‘dirty camera’ was toned down to look almost like ‘dirt in my eye’. The player being in charge, yet waiting until the last 10 seconds of gameplay to give an order, hampered my enjoyment.

This was the cheapest one on this list (I got it with points instead of money), so for money=fun it’s the one I had most fun with. Although the field of view made me feel nauseous on occasion...

Private Marlowe joins Bad Company as they enter into a conflict against Russian forces, and only they can save the day. 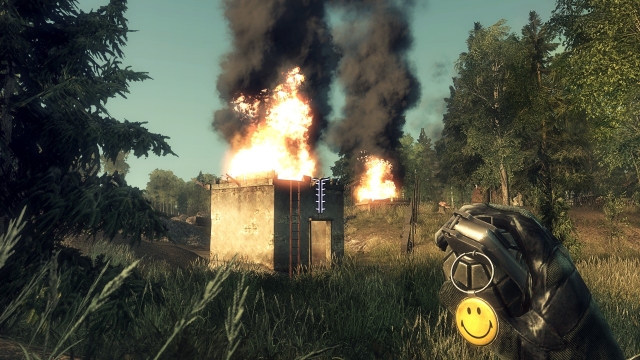 Story:
It followed a simple plot, and actually felt like a company in wartime without overdoing the realism. As the newcomer, you’re perfectly situated as the straight man to the other’s buffoonery, and it serves as a good excuse as to why you are being made to do everything.
Characters:
Somehow the characters were stronger than in the sequel. Good characterisation without depending on stereotypes. The finale has Bad Company driving off into the sunset with a truck full of gold, and that was such a great ending for them.
Fun Factor:
Despite being quite challenging in places, I had fun with it. The only issue I had was with the aerial bombardment weapon, which I didn’t realise needed controlling directly until the final time I had to use it. Those tanks are difficult to destroy by hand…

As this was the entire reason I began writing this, I had some high hopes for it’s quality. 2016 was a good year for single player FPS experiences, after all.

It’s the First World War and the Germans need sending back home, one way or another. 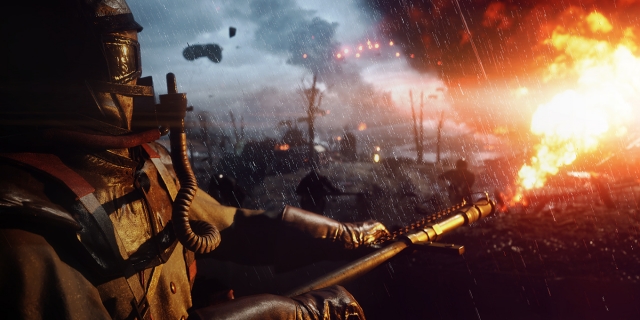 Story quality:
There are five chapters, each one with a different protagonist and tale to tell. Quite realistic (for the most part), if not based on people’s actual experiences, though that means they’re not very compelling. Each is 2-4 missions long, which isn’t very long to build a decent narrative, either.
Characters:
Each protagonist is interesting in their own way, but with only a few missions each there’s not much room to give them an arc.
Fun factor:
Honestly, it’s very dire. Yes, it’s supposed to be, but I’m not ranking these on their ability to accurately portray conflict. You can be accurate and fun, but this goes too far in one direction and not far enough in the other.

I actually played the multiplayer open beta for this when it was available, and if it wasn’t for the other players I’m sure I’d have had fun. Not enough to warrant a full-price purchase, though I did like the cops & robbers tone.

Drugs are flooding the streets of Miami, and it’s up to Detective Nick Mendoza and his partner Khai Minh Dao to find the source, and put a stop to it. 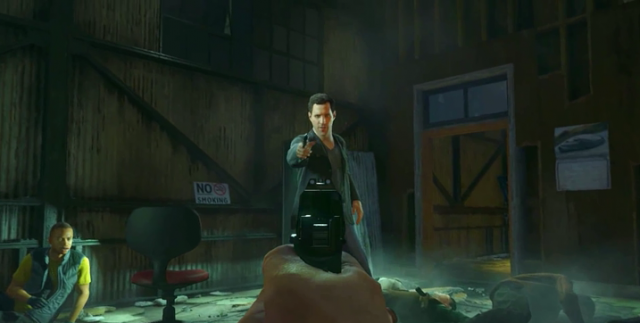 Story quality:
Honestly, it’s a pretty good police procedural with some pretty great twists. The missions being broken up into episodes Netflix-like (with a countdown to the next episode) is funky, though the loading times really take you out of the experience.
Characters:
There is some solid character work, building some nice characters with some good arcs.
Fun factor:
Incredibly long loading times are a pain. The opening mission’s music looped twice, and it was about two minutes of an actual song. The gameplay itself is inventive, with you being able to actually arrest people instead of straight up murdering everyone you meet, and there are some great set pieces.

So there you have it, the best one is the one that took a chance and went another direction. Battlefield 1 is a good game, but it’s not the one I enjoyed the most. It marginally beat out Bad Company on the grounds of having more variety. 3 was knocked down mainly due to that smutz and lens flares on the screen at all times, but again the variety of missions made it better than Bad Company 2.

That didn't even escalate quickly, it started harsh.

Well someone's a Call of Duty fan. I personally thought the Bad Company games had the best campaigns. Didn't take themselves seriously and just had fun blasting and blowing stuff up. DICE really needs to make Bad Company 3!

I'd like to see another Bad Company. If only to see how much bigger it gets!

Thanks for the article. This is the only place I found with this info, which is useful since there's a eight hundread battlefield games and expantions.

It was a hard one to research, I'll admit. I thought I'd worked out which games have a single player campaign, only to discover that I'd missed two and had to search those out!

Battlefield Hardline campaign is really good. I went into Hardline with low expectations, so that likely helped the enjoyment factor. The price NOW is worth the purchase just for the campaign. The urban warfare games don't do it for me at all. For that reason I would lower 3 and 4. Although 3, I enjoyed the co-op.

Battlefield 2 pc and 43 xbox were the last multiplayer we played. Everything now is co-op and single. What I would like to see is Battlefield structure their PvE like Destiny - a co-op or single player combo using "fireteams" of 1 to 3 players. That way EA isn't pressured to develop both separately.

I'd definitely be interested in seeing the "fireteam" aspect added into Battlefield!

Cheers for the article. I have a better idea of which series to try and which ones I should skip.

Glad it was of use!

I highly disagree with Battlefield 1 taking top place. The campaign was too short and its characters too shallow for fake nostalgia. An African American, a tom boy and the hardened old man? PLEASE.

BF3 also felt more complete than BF4 and BC2 is definitely top 3.

The only BF game I have played is BF4 campeign. And I loved it!!. I was reluctant to check out BF5 or BF1 as they both are old school shooters (I know I might have enjoyed it if i did but meh) when I heard 2042 would be a modern shooter, I was thrilled to check out its campeign....only to find that there is none...;(

Now I am thinking of going and playing BF4 campeign again......*sad*