Regular readers may know that I’ve mentioned once or twice how my favourite game franchise is Codemasters’ classic egg-based platform puzzle series, the Dizzy games. This is the first of two articles where I will be ranking the games in the series in order of the ones that I like least to most, and give you some details about them. With a slew of titles being released in the 80s, there are a lot to go through, but I start the adventure here with a run down of Dizzy’s best puzzle game spin-offs

Proving that even in the best series ever created, there are still some stinkers. Dizzy Panic is a massive disappointment and is generally regarded as the worst Dizzy game available. It’s a falling block puzzler that sees you trying to match a conveyor belt of holes to some falling shapes. It’s like that Dale Winton game show but without the celebrities falling into water. This is not a good game. Look at it!

Thinking of Dale Winton (may he rest in peace), the horrid orange colour scheme on the Amstrad version was one of the worst palette choices I’ve seen on the machine. The Commodore and Spectrum versions had a much nicer look to them, as did the Amiga version, but they’re still essentially electronic versions of those toys that you give toddlers to learn about shapes.

Apparently Codemasters wasn’t even entirely certain what this abomination was called. Some title screens says Panic Dizzy, some say Panic! Dizzy, some say Dizzy Panic. The inlay card says Dizzy Panic for most versions, but Panic Dizzy on a few. The title card and loading screens rarely match.

When looking up the inlays for this article, I noticed an interesting quote from Mark Baldock, stating it was “the most compulsive game [he had] played since Tetris”. Mark Baldock is not a videogame journalist, he was a designer at Codemasters. When you have to get your staff to write quotes for the game box, you’re in big trouble. Even Daisy is bored already.

There was a completely different version on consoles which consisted of two match-3 puzzle games and a sliding picture. It’s only available as part of the Excellent Dizzy Collection and it’s marginally less awful.

There are actually only seven Dizzy puzzle games. But Dizzy Panic Is so bad, I felt it deserved to be eighth place. As a result, there is no number seven.

6 - Dizzy Down the Rapids

This one is a bit obscure. It’s a clone of Midway’s arcade title Toobin’, which wasn’t a great game in the first place. The controls are a bit clunky and that makes it pretty hard to play. Add chronic slowness and incredibly repetitive gameplay to the list and you’re left with a Dizzy title that really feels like just a cash-in. It’s almost like it’s had the character added as an afterthought in order to sell a few more copies of a dodgy budget title. Fun in small doses, but you’ll probably be fed up of it in less time than it takes to load it in from tape in the first place. Get it on disk if you must get it. This is the actual frame rate of the game.

This is based on one of the mini games in Fantastic Dizzy. In it, Dizzy has been thrown into the sea and he has to get back to the surface before his oxygen runs out by riding bubbles which constantly rise up from the sea bed. Smaller bubbles move faster than larger bubbles, but they also pop quicker, meaning that you’ll have to jump between them in order not to sink back down. You’ll also be avoiding sea life as you go.

The 8-bit versions of this are abysmal. There’s a really shoddy and garish CPC version that’s clearly a lazy Spectrum port. It comes complete with blocky low-res graphics, lethargic gameplay, a horrible orange palette, and a screen size so small that even an estate agent would have trouble putting a positive spin on it. The Spectrum version itself is slightly less ugly but just as slow. The Commodore 64 version is almost pretty, but Dizzy is weirdly shaped, and it’s nigh-on impossible to see the bubbles against the garish yellow background at the bottom of the ocean floor. 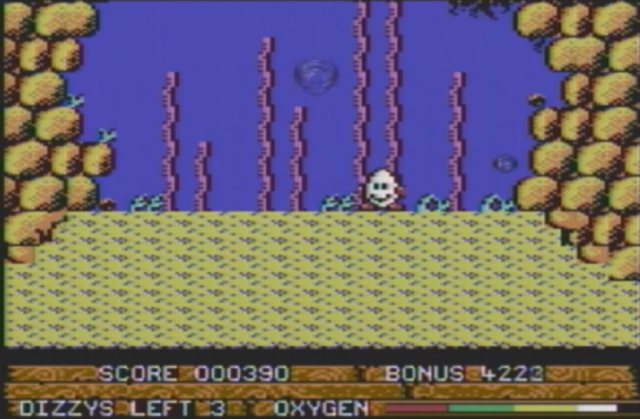 There are bubbles under Dizzy in this screenshot. Good luck finding them.

This is a shame, because that’s largely all you ever see in the 8-bit versions thanks to some diabolical collision detection on the bubbles, and the lack of screen space making it frustratingly difficult to see bubbles below you to jump on. If you do somehow manage, usually by sheer luck, to find bubbles that you can jump on, you’ll probably end up getting killed by an enemy that takes up most of the available screen space above you.

The Amiga, MS DOS and Atari ST versions are a bit less frustrating. They have nice clean graphics, enough screen space to be able to move properly, and the collision detection is actually consistent, meaning you don’t go straight through bubbles like on the 8-bits. It’s still frustratingly difficult to play, and not really one that you’ll keep coming back to. Fortunately for Commodore fans, the Amiga version is much better.

This one is a real oddity. It’s actually a completely different game from all other versions of the title. Quite a good one, but it’s clearly not the same game that all the other systems got. Presumably Codemasters had some kind of issue with the port and put a Dizzy sprite in another already-made game. It’s a rather bland-looking maze game (although to be fair, all games look bland with the C64’s pastel palette) which sees our hero guiding little birds to the exit like the Flickies in Sonic 3D Blast. 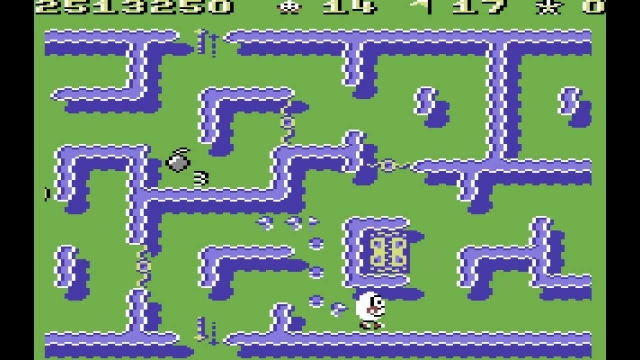 What the hell is this game? Because it's not Kwik Snax.

Released as part of compilations on the NES, Master System and Game Gear, this is probably the most obscure of the games. It’s a maze game which sends Dizzy in search of fruit whilst avoiding baddies such as mummies, squid and bugs. It has quite a few different mechanics at play such as power ups and changeable levels. There are movable blocks in some levels, Dizzy can wrap around the screen in some, and in others it's just a race against time to collect all the fruit. 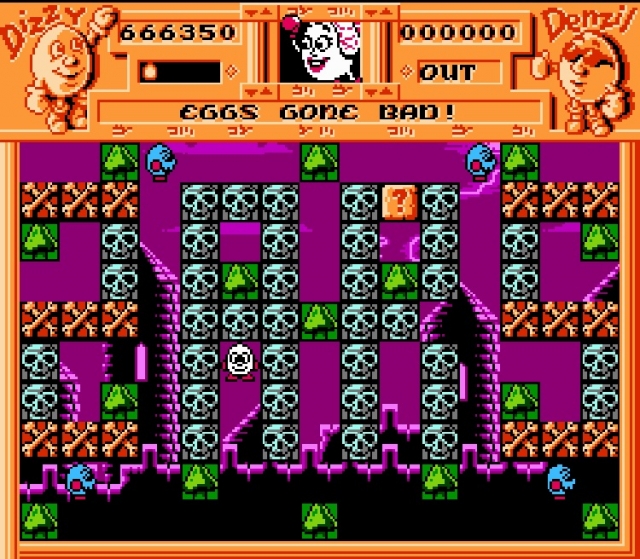 Here's the NES version of the game from Quattro Arcade.

The standout unique feature though is the two player mode, which pits you against a friend to collect more fruit than each other. There’s a bonus level every other round which is identical to the one in the proper versions of Kwik Snax. Speaking of which:

2 - Kwik Snax (all other versions) It might not look pretty, but the 8-bit version of Kwik Snax is great fun.

This was a bit like the old Pengo arcade game. Dizzy pushes blocks of ice around to squish enemies whilst also collecting cherries. The screen wraps around at the edges like the PAC-MAN tunnels, giving an escape route that the Sega classic never had. It’s super bright and colourful, with lush chunky graphics. The 16 bit versions look even better, but they’re made much more difficult by the levels being physically smaller, despite using the improved resolution of the more powerful hardware. This is somewhat frustrating as it makes the game unnecessarily difficult compared to the 8-bit versions and it ends up not being quite as much fun.

There’s a clever bonus stage every other level to mix things up a bit. In these Dizzy must collect fruit by sliding through a level, only able to stop when he hits a wall, at which time he can change direction. There’s a strict time limit to these, meaning you have to think on your feet to get all the fruit. It’s a really good idea and essentially makes it feel like you’re getting two games for the price of one. This was actually one of the first games that I completed on the CPC, and it’s a title that I still turn to every now and then in 2018 as well. It’s a maze game that sees you collecting food and running away from ghosts. The PAC-MAN inspiration is very clear, but it does enough to differentiate itself. Rather than collecting pills, you have a selection of food such as burgers and hotdogs to collect. Powerups take the form of things like ketchup and mustard, keeping with the junk food theme. The mazes are all different, and there’s cute cartoons between sections as well. Add to that a cracking piece of music from David Whittaker, and you’ve got yourself an 8-bit puzzle classic. If Dizzy is eating chickens, isn't that technically cannibalism?

There were versions on the Amiga and ST as well, with larger, more colourful mazes and a different tune. I didn’t personally enjoy these as much. They were really nice games, but they didn’t play exactly the same, and the settings were a little odd for some levels. I’m not sure why Dizzy was hunting burgers and fries in an ancient Egyptian tomb for example. They’re still good games, but the 8-bit versions were the best in my opinion.

It was very close between this and Kwik Snax, as both are brilliant games. The fact that the 16-bit versions are just as playable as the 8-bits was the tipping point here, as I could honestly recommend any version of this, whereas I can’t really recommend the Atari and Amiga versions of Kwik Snax. The Amiga version is very pretty, and just as playable.

Fun fact: this was originally designed as a marketing gimmick for the Happy Eater restaurant chain. The game took two weeks for the Oliver Twins to complete, and somehow the chain backed out in that short space of time. Never one to let a good game go to waste, the twins changed the sprites to make it into the game it now is, and the rest is history.

Good list. I wasn't aware there were so many puzzle games based on Dizzy!

I think Dizzy eating a chicken is the equivilant of a placentea eating a human?

I loved the Amstrad version of Kwik Snax!

I had no idea there was so much confusion around Panic Dizzy's name, or is it Dizzy Panic... ARGGHH! :D

Great article this mate, brought back some memorys :)

Thanks, it did for writing it. Working on the adventure titles as we speak so they should be ready in a few weeks.