With Monster Hunter: World out on PC, I thought I’d take the time to showcase some top weapons to build for. May the streamstones ever be in your favour. But really, with a little bit of thinking and Athena’s ASS (Armor Skill Search) you too can have equipment to chase for. In this list, I’ll feature three weapons that were part of initial launch, with the last two being event or DLC dropped weapons post-launch. A quick note, the values I list here are the raw weapon values. The ones you see in-game are often referred as bloated values, factoring the motion value or the “power” behind each attack. Also, it makes it a lot easier maths wise to compare the raw over the bloat values.

The most drastically adjusted weapon in the series, it got a massive mechanic overhaul with the bows now all having Close Range coatings that are unlimited, and bow charges are no longer restricted to the specific bow. Along with motion value changes to all of the shots, their critical ranges adjusted, access to nearly every single bow attack from previous games (no heavy shot here luckily), and new movesets that shake up the bow into the definition of a glass cannon on Bane juice, forget your normal steroids. Where bows used to be raw/moveset first and element falling into the wayside mostly (outside a few outliers), bows have switched their game to a balance of both depending on matchup. But if we’re crowning something, critical element builds are king and raw being the first prince. Okay, meander aside. Allow me to open with one of the most powerful bows in the game. Anja’s bow might seem a weird pick up, but very few bows rival it in terms of raw, and element. It’s also pretty relatively easy to get Critical Element from wearing two Rathalos armour pieces. This is one of the top three bows arguably to wield in the game and is great against Kirin and Xeno’Jiva. Now I’d be remiss to not mention the Kulve Taroth variant with Fire, but that acts as a side grade and as the power creep continues to happen, the raw difference to affinity will reduce this gap.

Now why Critical Element? Well, bows had a lot of changes to motion value and how the weapon functions. Motion value is the strength of an attack and is calculated based on your weapon’s true raw attack, what you see in game is the dumbed the bloat value (as a way to show how strong a weapon, slower being more damage per hit). Element ignores this and is dealt directly as damage and is based on a modifier (barring a few exceptions), critical hits will be a fixed value based on the weapon. Ranged weapons also have a unique property called critical distance which will give you increased damage, and on bow this also affects element damage dealt. 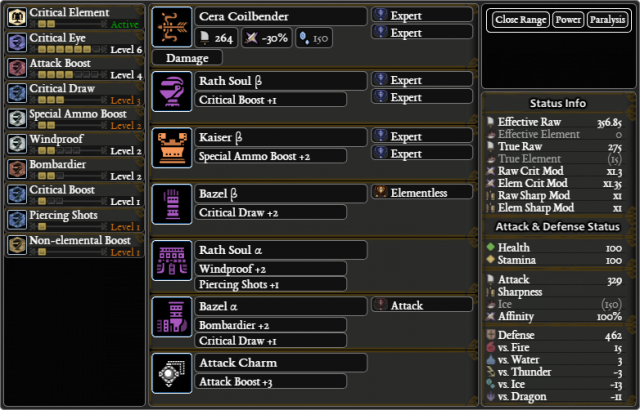 I'm not gonna deny it, I miss how effective raw bows were.

Now, because of all of these changes, raw bows like the Diablos bow are lacking and aren’t considered meta or viable, that said they can be fun, especially in multi monster hunts but arguments can be made for blast bows (Kelbi and Teostra runner) for those situations. But if you’re rocking raw over element, you need to understand that you’re going to have play to that strength more, since element zones don’t always correspond to crit zones. So here’s a Dragon Piercer build since those are all the rage.

I will say this now, Dragon Pierce (or DP) builds are not optimal and only work in the niche. This is because DP shots have a charge mechanic and because most Monster hit zones are small and vary wildly, your damage loss and risk is increased. Also, just because a speed runner or world record holder did it doesn’t mean it always works or has practical use. I’m looking at crit draw wall jump powershot or crit draw DP on Bazelguese (who’s a literal glass cannon firing/dropping bombs). Yes I know Critical Draw is overskilled, but like Anja Arch III, this is designed as the basics for starters. Just don’t use DP without having buffing skills like Special Ammo Boost and Pierce. In a precarious situation, you’re just asking to be pinned or carted by the Monster. Blast bow isn't as good, but that said Styx is the next best craftable followed by Kjarr Bow Blast.

50 less raw (before Non-Elemental Boost) compared to Cera and not the strongest blast available. This a bow that probably screams trash, or at least below average. You’re not entirely wrong, in fact the Kulve Taroth “Blast” bow wins in that department. But, I’d like to reason why this is chosen over the arena’s bow and it’s because of Status Crit from Zorah’s set bonus (Gamma really amps it up but that’s not available for PC yet).

Once the status is fully unlocked and has Blast Attack 3, this will have a blast value of 300. This means per an arrow hit, it can deal 30 blast at a 1/3 proc rate. Honestly the raw difference is large enough I’d advise against this, but for fun runs and messing about this is solid build. But of course, Kulve Taroth heavily swings the meta in terms of what weapons are considered the best and KT Blast takes the crown at 440 Blast after Release 3 and Blast Attack 3, with 30 raw increase. Only time this is potentially better than Cera is the niche Apothecary mantle + Affinity Boost for event quests like Greeting Gluttons or Triple Threat Takedown (but that’s for Zenny farming than decos with Bandit Mantle) because the monsters have low health and semi weak to blast procs. Side note, Kjarr Bow Blast is amazing and topples this (and Luna’Styx bow) by a falling avalanche with Xeno Gamma. 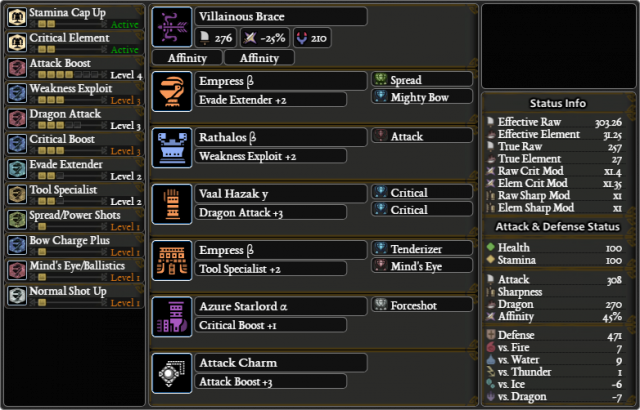 It's not optimal, but the ability to dunk an Azure Rath in sub 1 delicious.

My personal favourite for style and damage, this bow rivals the Cera and will give it a run for the Zenny against the Rathalos line. Sure the Vaal Hazak and KT “Queen” are better in terms of Crit Element builds, but if we’re talking no holds barred arrows to the face adventure ending goodness, Jho is king, conqueror, and exctinitioner. And hands up, I’ve just taken this from an incredible Time Attack ranged Hunter called Phemoto from their Sub1 hunt against Azure Rathalos optional quest(link), who was inspired by Team Darkside’s near Sub1 run(link) who used a slightly different build that slotted for affinity. This build mainly works because the Rath family are exceptionally weak to dragon compared to other monsters.

A few notes, this is purely meant for optimal damage and isn’t actually a set I’d recommend for general play. Firstly, running a bow without a single level of Constitution is bad in general and going over Lv3 will net you diminishing returns. Which leads to the second point, the stamina reduction is multiplicative meaning the 25% reduction from dash juice with Constitution Lv3 won’t result in 55% (which hits the 50% maximum stamina reduction). The actual value is 47.5% reduction and eating for Black Belt (which gives 20% stamina reduction) will cap it, Con4 will reach cap without Black Belt. This means the lowest level of Constitution you need to reach cap is 2. But slotting for that is very difficult, and unless you’re using vouchers to eat for Black Belt and Sharpshooter (to increase normal shot damage), I would recommend either the charm for Fitness to get Con3. Or if you’re inclined, Con1 instead of Mind’s Eye and swapping attack for critical if you’re not running Evasion Mantle and Affinity Booster to get 685.58 efr. Yes, that’s a lot of damage. 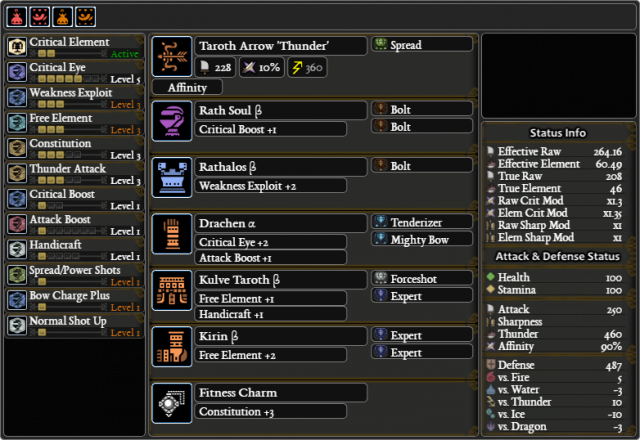 Thunder bows before KT were bad, and the damage increase from this over tobi is just plain gross.

Whilst powercreep heavily affected melee weapons, ranged weapons have had it quite easy. No real game changers have truly shaken up what skills to have on a bow, and since launch the weapons haven’t changed per se. But, if there was a true gamechanger (which the Azure set doesn’t do in the current console meta), Kulve Taroth did spike the bow pool with three weapons, arguably four if the Diablo’s KT “Horn” didn’t need release and could overtake Legiana’s bow. The Taroth “Water” and “Fire” are technically upgrades, with the other being more consistent with getting critical hits. “Thunder” on the other hand, there’s no denying just how much of a power spike that gave the meta over the Kadachi bow, which pales in comparison now. With 10 more raw, 5 less affinity, and 120 thunder (once element is released), there is just no denying how much hard it hits for. For all of the reasons on why bow has never been better with the normal and critical element modifiers, the return of investment in release is near insane, being able to hit 5~10+ damage per arrow on average. And since a large bulk of the Monsters in game are weak to thunder element, this is a bow that’s worth the grind to get.

Something I’ve not yet covered is the skills aspect of these sets, which is largely because the modifiers they give are straight forward. Spread/Power Shot and Normal Shot Up increase the damage dealt by 10%, with Sharpshooter stacking with Normal Shot Up. But Bow Charge Plus is honestly a huge boon for the bow, this is the sole reason bows hits as hard as they do. As stated previously, spreadshots hit about twice as hard as normal because it fires more arrows. Bow Charge Plus makes the bow combo from three to four, which is massive damage change with the optimal rotation going from spread>normal>normal>spread to spread>normal>spread>normal>spread. This is because the spreadshot is your strongest finisher and will fire an additional arrow compared to the previous rotation without BCP. This will see about 25~33% of damage increase averaged out, since the fourth charge of spread shot can hit upwards of 300+ damage compared to the 200+ with spread shot lv3. Also, if you’re a dashing fiend for a bow you’ll fire an increased charge level of charge which means very good burst damage with spread shot Lv4. Perfect for tripping or getting that sweet, sweet, dunk.

And thus bows are finished, there’s things here and there I’d would’ve liked to show but they just wouldn’t fit this format. Plus bows has a lot tricks up its sleeve, that depending on the bow and monster, you can vary how you deal with them in many different ways. Sure this didn’t show other playstyles, but the fact that bows now have the greatest KO potential and have reliable (albeit very dangerous) mounting attack. The bow is arguably king with what it has readily available. Each subsequent update has only improved the arsenal of bows with more KO, stagger, and stamina options, with Lunastra’s two piece bonus or the slot power that gamma sets offer given how hungry bow sets are for decoration levels. Now that I’ve started bow, we’re in the endgame and it’s in shooting distance. So, until that auspicious occasion: Happy Hunting Hunters.