With Monster Hunter: World coming to PC, I thought I’d take the time to showcase some top weapons to build for. May the streamstones ever be in your favour. But really, with a little bit of thinking and Athena’s ASS (Armor Skill Search) you too can have equipment to chase for. In this list, I’ll feature three weapons that were part of initial launch, with the last two being event or DLC dropped weapons post-launch. A quick note, the values I list here are the raw weapon values. The ones you see in-game are often referred as bloated values, factoring the motion value or the “power” behind each attack. Also, it makes it a lot easier maths wise to compare the raw over the bloat values.

To start off the list, we’ll begin with the tried and tested Greatsword. Slower hits, precision and knowing when to strike is critical to hitting large numbers and killing Monster with the least number of hits. Something I’ve tried to do is reduce the need of decorations in this recommendation since RNG isn’t the most gracious being. Also, I’m fully aware that there are cases of overskilling, mainly in the Crit Draw department. But given how Decoration lite this is, this isn’t going to be super optimal and more a build guide to run off. 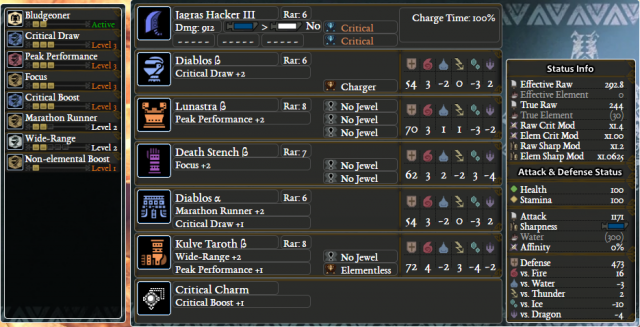 Perfect for Kirin if desired, add jewels for Thunder Res and Divine Protection as needed (Link)

Let’s be honest, if someone told me that the first monster you killed could be made into a top tier-ish weapon I’d have said you’re daft. But here we are, where the Great Jagras is part of the top pack sipping their coffee laughing over their kills. What makes this a standout choice is both its ease to get it, and relatively inexpensive build guide. Packing your typical Weakness Exploit and Focus, it also packs Peak Performance for that hit and run style gameplay. But with the Diablos set bonus for Bludgeoner, you’ll get a bonus 15 raw when you’re in green sharpness. This will grant you a damage bump of ~8%, and whilst not exceptional, this is a small bump that will add up a lot more with Greatswords. Especially running with this Critical Draw build, where you opt to run a very hit and run playstyle like Monster Hunters of old. 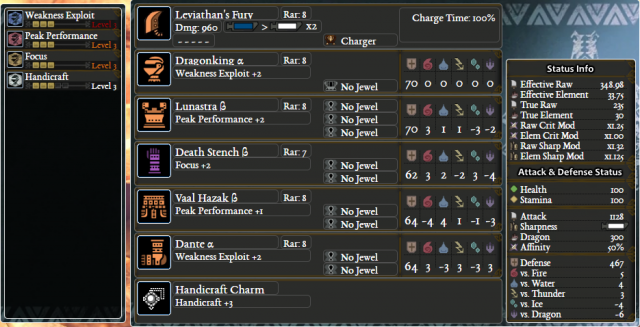 Made for those without that many decorations, this is over skilled for Weakness Exploit (Link)

Opting more for damage with larger and more frequent openings, Vaal Hazak’s greatsword can provide some top tier damage return despite not running Non Elemental Boost like its Jagras brethren. With white sharpness using a Handicraft III charm, you’ll net a boost of 10% with your raw damage after sharpness. Throw in the additional Peak Performance, Weakness Exploit, and Focus combo, you’ll be hitting hard and every so often dissipating whatever Elderseal-able thing there is. A very cut cold-cutting Greatsword that tries to produce as much damage as possible. A main downside to this though is that the augmentation slots available are very limited and given the nature of Peak Performance, augmenting for health isn’t as easy as the previous Greatsword build. The Earplugs 5 is overkill for most cases, but it makes doing the tackle easier for roar blocking (Link)

But who cares right? I want slots out the wazoo, and throw in some anti annoyances. That Monster’s roaring? Nah Mon’, I can’t hear you over my charging. What’s that? An earthquake, don’t worry I’ve real good boots stand up. Sales pitch aside, a Monster’s Roar and Tremor isn’t exactly the easiest thing to anticipate. Anjanath’s sudden bursts of roars and a roaming Diablo’s tunneling are pretty annoying especially when you’re anticipating one thing over another. Thrown in the Non Elemental Boost and you’ll raise your raw to 220 thanks to the hidden blast. But to really put the nail in the coffin, how does twelve empty Lv1 decorations slot sound? Can’t hear me, I’ll spell it out.

With 12 slots, you’re able to gem in for possible Wide Range 5, Speed Eating 3, and still have enough for Sheath 3 and that lone Attack jewel, or even Sheath 2 and Health Boost 2 for those inclined. Another option is Health Boost, Recovery Up 3, Speed Eating 3, and Stun Resistance 3. All the while, your DPS isn’t taking that big a hit. Of course, for the more extravagant hunters, you can stick in a blessing mix of Attack and Expert Decorations for the lucky ones. Truely a build that is inspired by old no-nonsense builds with a classic Greatsword to boot, and you’re even hideous too! A two for one! 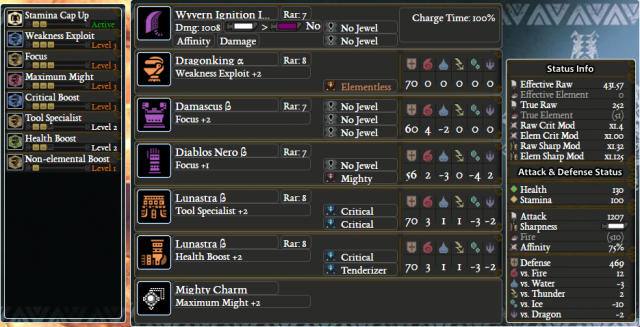 Okay to no one’s surprise, this one is here. Whilst you could argue for the Pickle’s Greatsword Anguish, this event Greatsword that won the weapon design contest is top tier in almost every way. Throw in Non Elemental Boost, and you’re rocking 231 raw, slightly more base raw than Anguish. But the real kicker is the -15% affinity and natural white. This can be augmented to 0% affinity, meaning no chance of hitting for less damage. Or better yet, throw in a health augment and only have -5%. Compared to the Anguish which can have a -15% if you augment for as much affinity as possible. Obviously there are edge cases for Anguish to come out on top, but really this one Greatsword wins in style points alone so we’ll leave it to rest for now.

There are tons of builds already for this one Greatsword, and tweaks to different playstyles. What mine does is merely provide a nice cookie-cutter one with slots to play around with, and if you’re lucky enough to have the Attack decorations you’ll have a nice damage boost. I’m still messing around for a Peak Performance 3 and Attack 7, alongside your usual skills so if that happens I’ll be sure to share it as soon as. 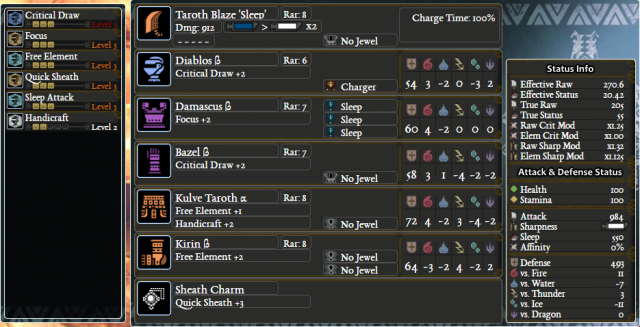 Now for the gimmicks, granted you have just made the basic Radobaan Greatsword. But really, this one is the icing on the cake. And I couldn’t have a build and not include her luscious weapons, even if they are too gaudy for my personal tastes. Whilst I don’t have it in my own hands right now, if you wanted a sleep Greatsword waking monster for some of the tougher and lengthier hunts, here’s a beauty in the making. With a disgusting 450 Sleep, throwing in Sleep Attack Decos will bring it to 550. Add one Apothecary Mantle and that Monster won’t know what hit it. Granted 190 isn’t great, but if you pair this with the above Greatsword you might give the Monster a nightmare death. That, or possibly the most hasty send off as possible. Crit Draw, White Sharpness, Sheath, and Focus will make it a quick process. Assuming you can get this Rarity 8 weapon from Kulve. Throw in the three Lv1 and two Lv3 slots, you can throw in some additional boosts to your taste.

And that’s it, the first of 14 weapon recommendations with a build for each of them. If you think you can do better, which isn’t super hard, post them below and showcase your skills because I can’t fashion hunt to save a cart. At least the layered armour system can save me slightly. Happy Hunting Hunters.