Longsword, not just something Hunters compare with each other. It’s a powerful, wide reaching, and surprisingly nimble weapon. In the right hands, something that’ll leave any Monster reeling back, and recoiling in horror. From its length and girth, it’ll carve itself a new whole for it to bleed. Buckle up, for the Longsword isn’t just for slashing, it’s good for jabbing. 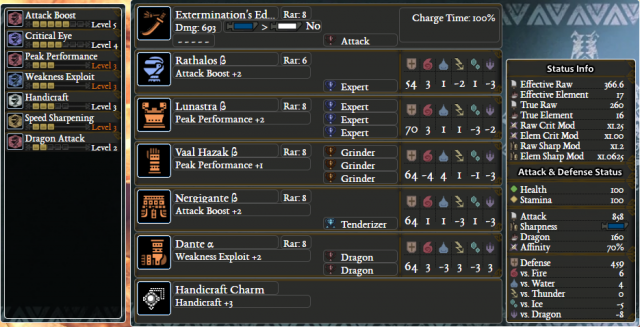 Okay, if the last article didn’t include the flagship monster, the second one should. Extermination Edge is quite the right name honestly. Whilst it’s boasting solid raw, and the Dragon + High Elder Seal is a bonus, what sets it apart is the untamable long blue. To make the length joke about Longsword, it’s a weapon that will surprisingly tear through a weapon’s sharpness. Couple this with the new Spirit Helm Breaker and you’ll chew the sharpness faster than Deviljho on a Great Jagras. But with how much of a safe bet Nergigante’s sword is, it’s hard to say no. Especially with its incredibly striking design, it’s one that’ll sink into you.

Okay jokes aside, because of how multi-purpose this Longsword can be, there’s no set build other than just stick Weakness Exploit and Attack to be done with it. The build I’m showing is of that vein, not quite peaking in strength. It’s got skills to keep you in the fight for longer. Speed Sharpening to always be in the blue, extra points in Dragon for that little extra bite against Elder Dragons. A little gem heavy and requires Dante’s event Code Red. You can easily substitute most of the pieces for Attack boosting armours, throw on the Dragonking Eyepatch α and you’re off to the races immediately. A nice end for the Iron line of the Longsword given how utilitarian that tree can be. 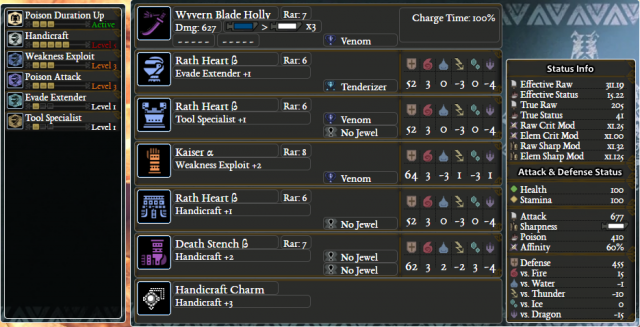 You probably saw this coming too, but honestly after seeing that Rathian wielding knight on Zorah’s back, it was practically love at first sight. Granted, it’s raw and overall damage potentially doesn’t quite match everything else on this list. Especially given how Poison functions in this game compared to previous, there’s not much to write home about. That said, I think it’d be remiss to not factor something like this. With how Poison functions now, and how often you hit, the chance of “wasted effort” with the application to proc Poison, it’s a safe bet especially for group hunts as status resistance isn’t adjusted.

Okay, this build is a tad weird but a gimmick must be seen to the very end and means Poisoning everything. With the Rathian set bonus of Poison Duration Up, this can be incredibly potent on those weaker to the ailment. Whilst the Poison Attack isn’t necessary, the need for a Tenderiser Jewel which will push Weakness Exploit to 3 is somewhat integral. That said, the need to have Handicraft is somewhat overkill since the white isn’t going to be that easy to maintain. If you have Protective Polish, you can easily change the legs for something more applicable. Throw in the additional 2 augments, you’ll be able to push the affinity to 20% and have life steal. Although by then, you might want to possible invest in something harder hitting. 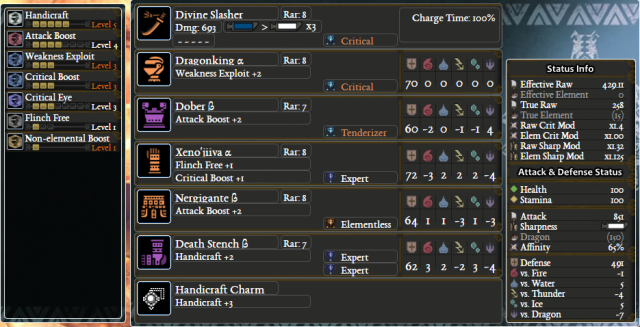 Okay, I know you’re rolling your eyes at this. But hear me out on my Zenny about why this Longsword beats Deviljho. As I’ve previously stated in my Top 5 Greatswords, you get a base raw boost of 1 if you add Non Elemental Boost. Whilst ridiculously a small advantage, this weapon is heavily reliant on having a high enough Handicraft to get that sliver of white to match Jho’s. But, the true icing on the cake is the single augment to make it either 429 or 443 augmented for affinity. Couple this with Weakness Exploit and Critical Boost 3, you’re able to rock a damage boost to produce a final attack value of 819 with Spirit Helm Breaker.

That’s not to say that Divine Slasher is king, it’s just that the fact Non Elemental Boost is so strong when equipped just right. Certain Monsters weaker to dragon will take less damage compared to Devilho's offering. The real nail breaker for this set is the Decorations needed, and how difficult it is to maintain that White. Boy is it not durable. 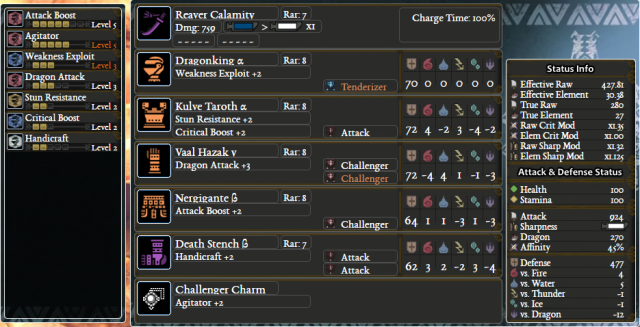 Enough is enough, because the Jho knows how to pack a hefty punch despite its stumpy arms. If there’s one thing you take away from this, it’s that you have to do the right builds. And that involves a lot of maths and thinking, and that means a lot of crunching. The double augmentation potential with the Jho does help save it. With the possibility of Agitator 5 instead of Handicraft 5 helps boost this set's raw attack. But even then, its affinity does heavily devalue the Critical Boost levels. Seriously, I question if that thing is too big to be called a Longsword. Too big, too thick, too living and too hungry. It’s more like a large slab of Pickle meat. Not an easy build. But with the final attack value being 428, it can just about compete with Divine Slasher. And against those weaker to Dragon, this will come out on top. But honestly, this Longsword has legs to stand on and to actually use it as a beating stick. 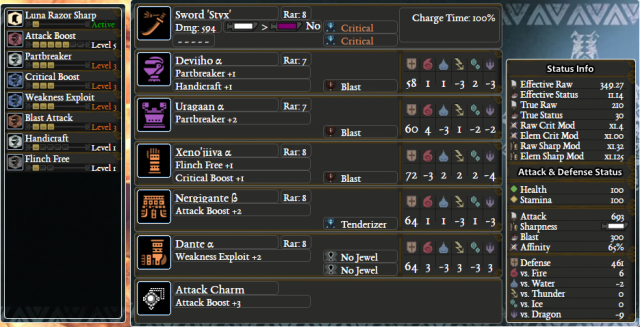 With two incredible heavy weights for swords, Lunastra wasn’t quite happy. A fusion dance later with Xeno and we’ve this monstrosity. Why’s it a monster? Natural white, Razor Sharp, two Lv3 slots, and some clear brutality. Luna isn’t messing around. Obviously this isn’t going to win out in terms of raw damage, but the sustain. Oh boy, this sword knows how to keep that white going.

Also, given my lot of Longsword recommendations, this is more in line with what I want to do: Give a template build for you to mix and match. Requiring only a Tenderizer and two Critical Jewels, this is arguably one of the easiest builds I’ve got. This is designed to just break everything and leave you standing. Whether you augment for more attack, affinity, or health is up to you. But this is a build designed to just tear things apart with the help of the blast. Throw in the five Lv1 slots to play with, you can pretty much factor for everything. Kind of.

I feel like I’ve made an innuendo at some point, oh well. Longsword or not, here is something to chase for as you pray to RNGesus for those decorations of a life time it’d seem. At least I was able to find some builds that are more player friendly. Happy Hunting Hunters.