Charge Blade: the meta for them hasn’t changed and has been boring for the most part since its launch. Nothing’s toppled the Diablos one, not for a lack of trying. It’s just how powerful SAEDs (Super Amped Elemental Discharge) are, otherwise known as ultras. With impacts reigning king, the power element phials aren’t comparing. Not because of the damage output, it’s because of their weapons being elementally weak for the most part. That’s not to say there aren’t certain matchups to warrant an element, it’s just the versatility of impact across the board. That said, here are my Top choices and it features an element too. 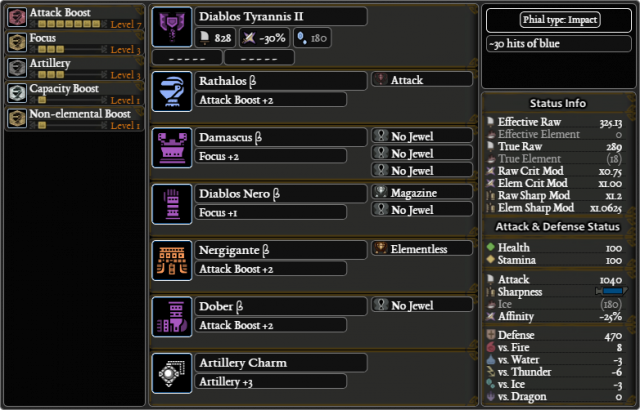 If you're lacking a Magazine Jewel, swap the waist for High Metal Beta.

There’s very little to explain or pick out for the Diablos set, this is about as cookie cutter you can get from the base game. It packs a punch from the get go, with the optimisations coming from the melee portion or stacking for increased KO that puts Hammers to shame. It’s kinda sad and gratifying to seeing the Charge Blade be as powerful as it is. With the following updates, it’s only grown more powerful. Kulve Taroth’s version grants an extra 10 defence, and Bethemoth’s Drachen armour is a straight upgrade for the Nero Beta Gloves being the notable notes. Like I said previously, the only way it’ll be dethroned is with more powerful element phial offerings.

In terms of adjusting, if you lack a Magazine Jewel, swap to the High Metal Waist for it. Not having it is a larger detriment than losing two Attack Boost levels. Other than that, this was my cookie set I run with. If I want to just mindlessly grind I’ll stick Health Boost 3 and Protection 2 for extra safety. But if you have the Artillery Jewels, swap the headpiece for the Guild Cross beta and change the Charm to Attack 3 for an extra free slot of your choosing. I’d recommend Medicine Jewel if you have Health augment for 10% extra healing. Or Free-Meal if you’re a cheapskate like me, seriously though health augment makes most Tempered Monsters a dawdle. 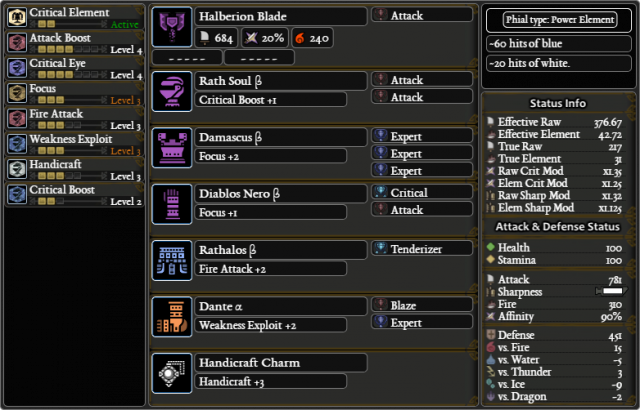 Super niche, but it's honestly a different playstyle because of precision needed.

An element phial Charge Blade? What gives? You’re nothing more than a apologist? Lies! Heresy! They need more love... The King of the Skies as a Charge Blade is without a doubt one that needs a lot of work to make it optimal. And I mean a lot of work, along with matchup. Other notable element phials Charge Blades include the Gigafrost II, Jyura Depth III (Outclassed by Kulve Strongarm “Water”), and Oppresor's Charge Blade. They’ll need white sharpness and Critical Element as a general standard. But there is a lack of a good Thunder phial Charge Blade, with Dragon lacking the element department and there’s nothing currently going to topple this one despite the weak Fire element.

Now, that said. This is will go toe-to-toe with Diablos against the likes of Kirin thanks to its small body for the most part. Vaal Hazak is a tad hit/miss, but if the Time Attack boards have anything to say. I wouldn’t be surprised if a 350+ Fire element cap version will rival/beat Diablos’ time. And before anyone can comment of them being absolutely trash to begin with, there’s a massive thing that needs to be understood: You don’t Ultra spam with Element! Before the SAED attack cycle, majority of the damage came from the “Axe” portion of the Charge Blade and performing the Elemental Discharge combo was the go to. This means having a charged shield/”axe” and using Crit-sets were the go to. With Artillery depending on the weapon on hand. Rant over. 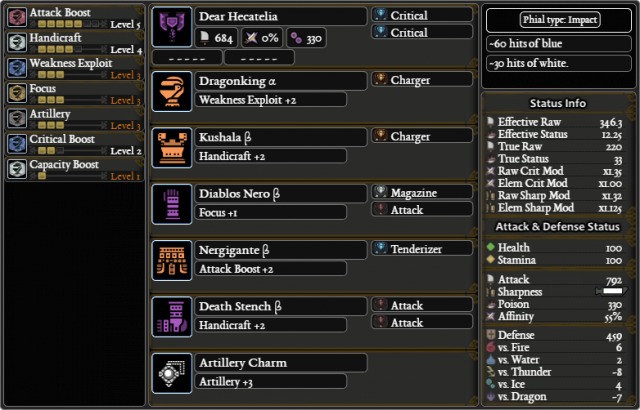 I only wish that post stealth phial change, true raw didn't make everything else worse.

The Queen lawnmower returns, and with a surprisingly good Charge Blade that can easily take you end game for quite a length. Personally, I’d use this more for multiplayer depending on the monster. Especially on the likes of an Uragaan or Xeno Jiva, although anything that loves to move around and can’t be easily pinned deserves this weapon. This is designed less for ultras and more on the weapon’s damage itself. So like previous Monster Hunter entries, prepare to become literally the worst as wail your sword axe monstrosity like a barbarian.

If you lack the Attack Jewels, opt for Vitality Jewels, otherwise this is definitely a more difficult set to build. But nonetheless, for those lacking the decorations I would swap the chest back to the Damascus Beta like previous builds. Otherwise, since this is a build focused on swinging your Charge Blade like a lunatic this set can be easily plugged into my basic Diablos set. Plus, that double Lv2 slot is insanely good for general purpose augmenting. 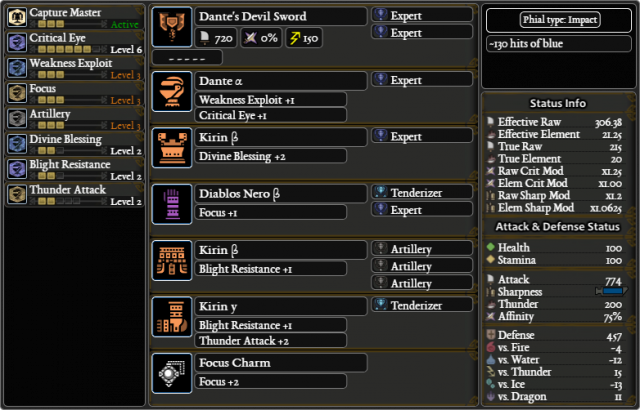 Now for a bit of fun for solo hunts, although if you want it for group it kinda works just not that great. Like my sleeper Lance build which had Kirin’s armour skill Capture Master, this is of a similar vein. Personal gripe is the element cap on the sword being so low and not going to white sharpness at all. That aside, the design is great and the fact its impact makes a great general purpose set for hunting/material farming. Just good luck with the loot tables and may the odds ever be in your favour.

Okay, now to the explanation of the set. I have none honestly, I built this mainly because I really wanted one just because I was at the time gem farming. Before the Kirin Gamma legs I had the set more built to for the Bone Charge Blade since unlocking the blast didn’t hurt. Swapping the head for Dragonking Alpha, and waist to the Alpha version. It did the job at the cost of Focus 2 charm since I didn’t have said Artillery Jewels at the time. 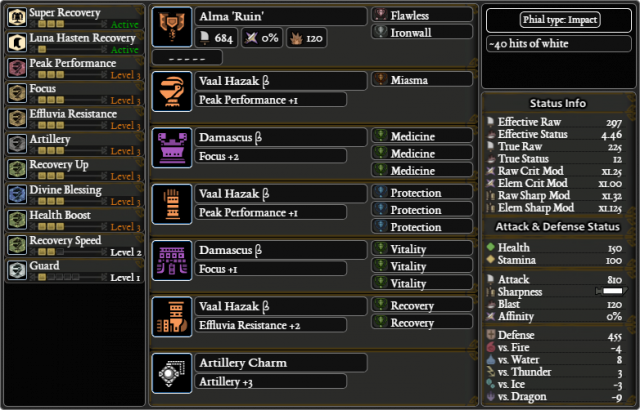 Maxed out peak for phial damage, literally made for those struggling in an attrition war.

What I’m dubbing the Anti Arch Tempered Vaal Hazak build, this is designed for not letting Vaal kill you as much as possible. 200 max health, as much recovery from attacks as possible, Super Recovery to regenerate HP overtime, and double healing from a Health augment and Nergigante’s Hasten Recovery. I’m not dying that easily Vaal! Slight anger aside, this is just meant for soaking damage and attacking as possible.

Generally speaking, I wouldn’t opt for the skill Guard Up since it’s only going to protect from Vaal’s Hyper Beam of death and its AoE (Area of Effect) breathing down onto the ground attack doesn’t require it. If you have an Ironwall Jewel, I would strongly recommend it to make guarding a lot easier (guard point include). The Peak Performance 3 is just a net gain to counter not having Attack 7, but honestly the concern is whether or not you’re able to recover faster than Vaal can damage you for the most part. Good luck for when you first face the Corpse Dragon, you’ll need it if you don’t have a single way to heal from attacks.

And that’s a wrap for the Charge Blades, this was a relatively easy list to do since the meta hasn’t changed since launch really. Which is blessing and curse to optimise, but until we see a whole lot of new weapons (namely element phials) or a buff to element phials. Diablos will most likely remain as the apex for Charge Blades. Until the next weapon construction monstrosity, Happy Hunting Hunters. (Update prior publishing: phial damage for impact type has been stealth changed so certain values have been tweaked, follow up article will cover this)