Switch Axe is a weapon that was good, got better, people forgot the axe portion, and is even better now. Okay, we’ll forget Generations since that one Hunter Art made Axe pointless along with the sword mode buffs it got. As for World, the weapons its gotten have been somewhat staggernant with weapons here being in line and getting buffs every other update it felt from new armour pieces. That’s not to say there’s not been a standout weapon, it’s more or less been sidegrades with a few notable exceptions. But much like Charge Blades, the power element phials could do with some love. 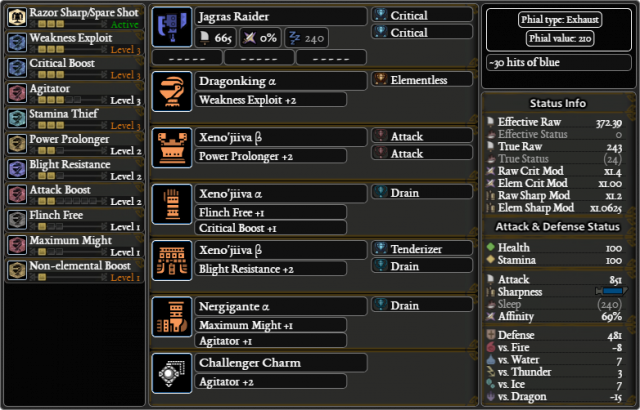 Augment for Affinity, Health, and Power for best returns.

So for those unaware, Switch Axe has two modes that are independent of each other. This means that if the phial is a non power phial type, the weapon is considered without an element. This means weapons that have Exhaust, Poison, Paralysis, and Dragon phials currently out are able to be boosted with Non-Elemental Boost, so slap that Elementless Jewel in for free extra damage. So what makes exhaust great or top tier? It makes Monsters exhausted quicker and deals KO damage when striking the head, which creates more openings to wail on with your axe/sword combos.

Razor Sharp is a set bonus from Xeno Jiva and is slightly underrated with the presence of Master’s Touch from Teostra and Drachen armour. But for vanilla armours skills it combos well for one of the best vanilla weapons to run with. In group play exhaust phials are a great help against Monsters like Tempered Deviljho since a weakened Golden’Jho will be more susceptible to traps (especially on pitfall traps since it won’t attack back), and just makes him more manageable even when enraged. The version I’ve shown is more damage orientated, but adding an Earplug Jewel will make it so that you can’t be roared off a Monster when mounted for an elemental discharge, which has a hidden Earplugs 4 bonus. Plus the Non-Elemental Boost-ability helps bring this more inline with the others (for the most part). Health, Affinity, Power augment is recommended for best results. Augment's same as barroth, but if you need an extra slot there's room for it.

So Paralysis, you think I might like it too much? Let me list the positives, a Lv1 and Lv2 slot, Paralysis Phial type, solid Raw, not too punishing negative affinity, and easy to achieve basic set. It’s a hard sell to not have it. Now, I’m not saying the Paralysis Phial on this is amazing. It’s not, there’s a superior version down the list. It’s just that it’s a great best of both worlds for creating openings and still outputting great damage.

Even with its level of paralysis, you’ll proc it 2-3 times over the course of a hunt give or take. Keeping your sword mode out is key to your yellow showers of delight, that the Focus 3 will easily enable you to do. Yes it’s overkill, but wailing with your sword just feels great. Minus the horrid movement speed, that is terrible and Evade Extender doesn’t do enough for me to try and squeeze in. But if you do like said skill and not Focus, change the chest to Brigade Beta Chest and Nergigante Waist Beta to easily slot it in and still have room for Paralysis Attack 3 for said decorations. 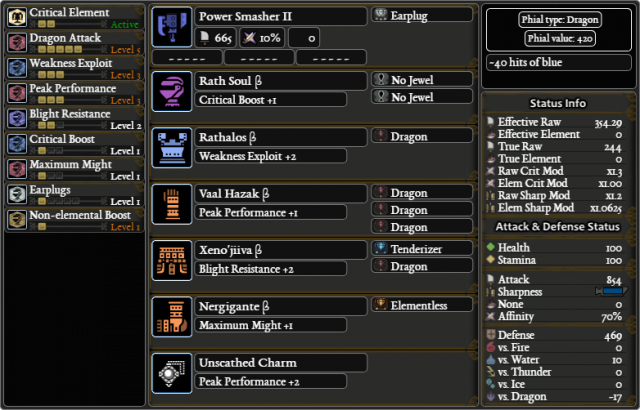 Affinity and double health if you're struggling, although an other affinity helps dragon damage

What I’m dubbing “Elder Seal is dumb and if it’s supposed to be that ““great”” so let me ramp as high as possible to just dick said Elder Dragons as much as possible, namely Arch Tempered Vaal Hazak’s Effluvia aura sheninganse because that creature is like a leaking tap at night, except it’s also killing you at an absurd rate” build. Otherwise known as “Dear Azure, pls die immediately as I discharge over your face”. Also known as “Dragon Car Salesmen Slapper”, I’m great with names can’t you tell? It just rolls off the tongue.

But in seriousness though the Power Smasher II is a great weapon for dealing Dragon element damage, it’s kinda surprisingly good. Ironically, this is also weakest to Dragon element. That aside I had difficulty with presenting the best build for showcasing purposes. Against Azure Rathalos, this is amazing because of the damage output thanks to Non-Elemental Boost and the phial damage. But really, it’s just too nice a tool to deal with AT Vaal for group play. If you wanted to, you can easily change the charm for the Clearmind Charm slot in three Vitality Jewels, dropping a Dragon Jewel, and swap the Earplug for Dragonseal Jewel to make its Elder Seal value High. With that said, there are a lot more optimisations to be made especially if you are wanting to shut Vaal’s aura down safer so I’ll be sure to link to that once ATs are confirmed for PC. 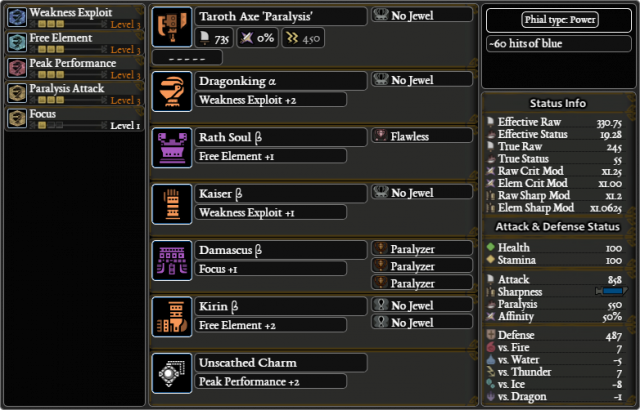 Barebones set, slot with whatever you want. I just wanted the extra lv1 slots

So Kulve Taroth makes her return back onto my lists, this time with the most disgustingly good Paralysis weapon. It takes the Sleep Lance and adds it to Switch Axe, which let’s be honest: it’s a sin. Against the likes of Odogaron you’ll practically never let it walk it’s that gross, it’s almost too powerful for its own good. I guess it’s not “that broken” because it’s locked and has Power Phial, but let’s not kid ourselves. 550 Paralysis is just plain cruel, Apothecary Mantle makes this so much worse.

Let’s get to basics though: this is the most starter kit set I can recommend without the need of say a Release Jewel, if they exist. So going from there, I just tried to make it as easy as possible on top of making it great for slots. Packing three Lv3, one Lv2, and five Lv1 slots, this also works really with any weapon that needs its element unlocked. I stuck Peak Performance 3 on it just because it’s easy to maintain with a Health augment on something that paralyses this good. 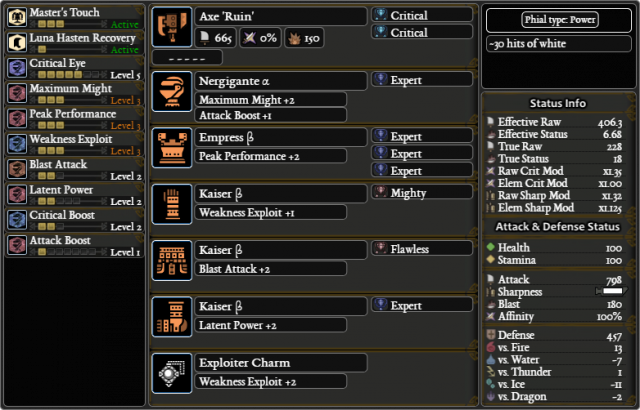 You expected Luna’Jiva, but it is I, Nergi’astra! I’m some sure Luna-gante works too, but sadly there’s nothing that ends with Dio. So you’re probably wondering “wouldn’t Luna’Jiva be more effective since the Razor Sharp weapon skill negates the need for Master’s Touch?”, and the answer is simply you don’t need a metric ton of decorations to make my set even viable because of Master’s Touch keeping you in white as long as you hit a Weakness Exploit zone. And even without the Expert Jewels, Latent Power 2 will cover said lack. It’s not 100% uptime, but it’s near enough and the 10 Raw difference and 10% less is easy to counter build against. But, Luna’Jiva is more potent until you have the Drachen Set which is crazy powerful for other reasons. You can consider that the upgrade if you will to this “Luna-gan-stra” set. Okay, maybe I suck with names.

Something I find rather funny/odd is that the full Lunastra Set, despite its ample supply of slots can actually be beaten by other sets when slotting for damage. That said, who/how many actually have 4+ Attack Jewels considering we’ve seen a modder disclose the drop rates with their decoration rebalance mod? My 500hrs have resulted in one appearing, I’ll figure out the math eventually maybe. But in terms of basics, this set does cover your bases for having more effective sharpness than the Styx variant assuming you hit a Weakness Exploit zone, you have an effective sharpness of 100 white sharpness units, Latent Power will make it one in nine will lose a unit. So a solid choice. What makes this viable here and not other weapons though? Power Phials increases the Raw damage difference once active to the point it will rack up a lot faster than Long Sword and Lance. Dual Blades prefers the extra Blast and Gunlance if shelling is more effective since you’re not shuffling for Xeno’s Razor Sharp.

Switch! Wrong game. So you’re probably charged now and ready to unload. I didn’t include Deviljho’s offering here because it’s just not user friendly with the white only being good at Handicraft 5 and even then my Long Sword offering does a similar job - swapping the Charm for Handicraft 3 and trading the gloves for Nergi Alpha. The Kulve Taroth “Horn” is also a top contender for damage, but the white will just disappear for Switch Axe for even more upkeep. Drachen fixes it for both weapons, but they’re both riffing off the same set and that’s not very entertaining or engaging. Plus having group synergy is always going to be good and unlike other weapons, Switch Axe doesn’t lose anything for it. And with that said, I’ll end this rant. I’ll see you in the shaft section next, until then: Happy Hunting Hunters.

that was a great article to read specially for monster hunter lovers.i was looking for such top 5 list although found some real splitting tool list like one in bestaxeguide