Holding the title of greatest shield, the Lance is a nearly indestructible force. Throw in Guard 5 and Guard Up, nothing’s going to one shot you with your indestructible shield. And yet, despite the cumbersome look it’s got enough movement to make a Dual Blade and Bow user choke on their dash juice. Charge into battle with the Lance and become the cavalry that others call for. Unless you can be the Spanish Inquisition, then always be the Spanish Inquisition because they’ll never expect it. 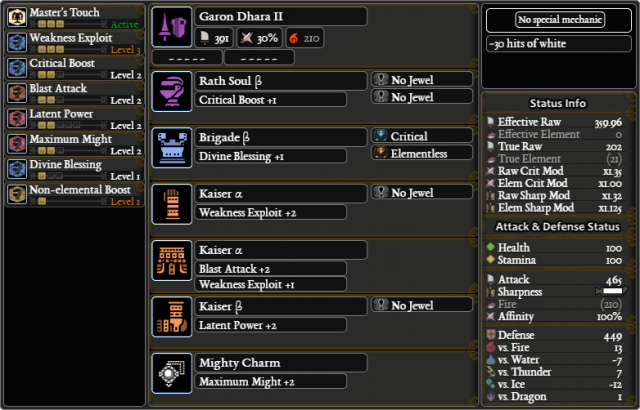 Latent Power is activated in that build, augment for affinity if you're struggling to maintain white.

Boasting the title of highest DPS for Lance in vanilla, pre-styx meta, and reclaimed post drachen. Its raw attack coupled with having unlimited white sharpness with Master’s Touch is heads and shoulders above the lance competition. But, until you get the Kulve variant this is one you’ll be able to rock this one easily.

One of the easiest sets to build, this Lance build is designed to easily capitalise on the out of the box white sharpness and naturally high affinity. For those opting for a slight boost to attack, throw in a Critical Jewel and revel knowing there’s still four more slots to boost your attack. 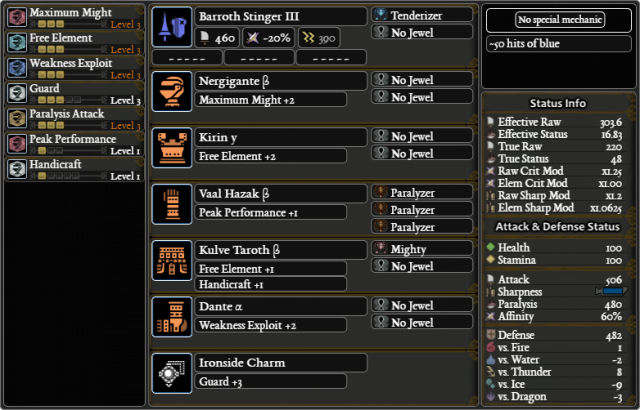 Slot to your hearts content and have fun with this, not much to add.

Barroth again charges into the fray with its lance and with a point to prove. It’s almost as if the Lance mimics it somehow. Anyhoo, this is a pretty much expected build. Not the easiest build, but pre-event required parts can be substituted for Rathalos Chest Beta, Kirin Waist Alpha, and Kirin Legs Beta. Main loss is two Lv1 slots and the Lv2 slot used to gem in Mighty Jewel for Maximum Might 3. Luckily it’s largely negligible, but the loss in overall slots does make it less customisable.

The main use of the Maximum Might is mainly to negate the negative affinity, but augmenting three times can result in neutral affinity. An small alteration for increased effective raw is swapping to the Unsathed Charm for another two levels in Peak Performance. This will boost your raw by an additional 15, since you have a level of it already. Not bad, but because of the lack in Critical Boost this lance offering will suffer for damage and works much better in group play for openings. 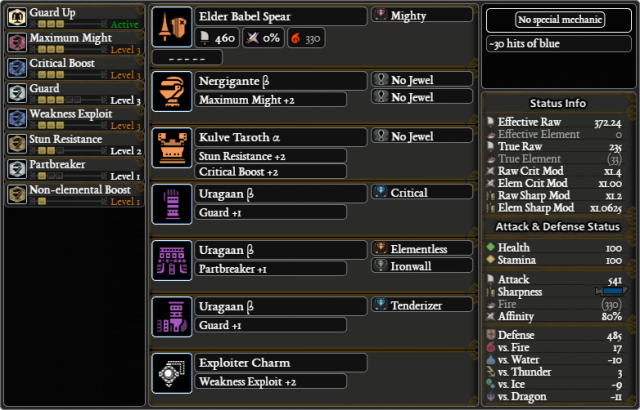 Personally, I'd opt for health just to keep health topped off.

A much harder hitting Lance set that does what the stereotype does, tank really damn well. For those without the Guard Up Jewel, this is a set for you. Needing only one of each, you’re fully able to capitalise on the Critical-ness of this set with an iconic Lance that is the Elder Babel Spear from previous games. The Non-Elemental Boost is what makes this as great as it is. Throw in the fact that the Lance can perform a power guard, even Nergigante can decimate you with its dive bomb.

And what better relatively basic set can be made for Arch-Tempered Monsters or even a Behemoth? If you’re able to augment I strongly recommend Health especially for Behemoth. When opting to tank, a huge problem is the bounce problem and whilst four pieces of Luna’s set will give you Mind’s Eye. If you’re able to have that gem, swap the Mighty Jewel out, throw in Health Boost 3 for insurance purposes. Funny thing to note, this has the elemental resistances to actually withstand the majority of Behemoth’s attacks since its Charybdis attack isn’t affected by Ice resistance from personal testing and dragon didn’t make much of an impact either. He just hits way to hard at times. Augment for affinity to make 100% chance to crit on weak point.

Now for something fun and memish. Whilst yes I could’ve highlight the Lance 160 Raw and 600 Thunder, it’s just not in me to mention something that niche, as powerful as it is. So here’s the most jokey but actually arguably the most powerful sleep weapon, on a Lance of all things.

So anything notable on this set? Some things, did you know that Protective Polish is affected by Item Use Up? So poke it till it sleeps, set bombs up, sharpen, and upward thrust said Monster’s face with an explosive payload to follow up. Whilst you could opt for a critical sleep set, until AT Zorah drops this set isn’t going to change much. The use of of Capture Master set bonus from Kirin is a gimmick, but for I couldn’t help myself. A plus on this set is the fact that if you augment for Affinity you’ll have 100%. 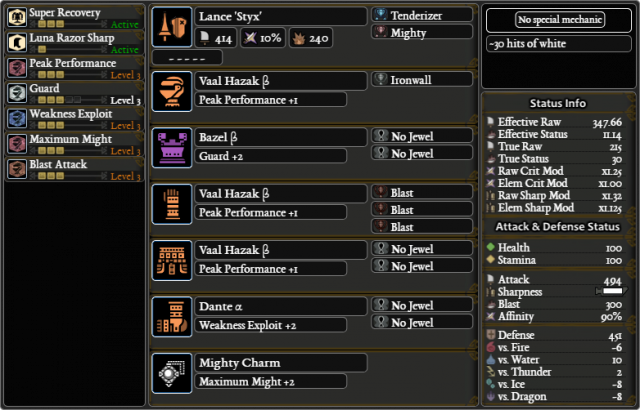 If you're facing the likes of Arch Tempereds or Behemoth, swap Might Jewel for Shield.

Finally back to Luna, her weapon sets are naturally just insane because of their ability to have Razor Sharp and no weapon doesn’t get an improvement from it. Same applies to Lance, it’s a weapon that will see a benefit from Raw and Element damage depending on the balance. In World, the balance is more skewed to Raw majority of the time and for general lancing this is top 5 for DPS for natural white sharpness and the Razor sharp keeping its 237.6 Raw after sharpness modifier for quite some time.

Now to the set, it’s not not the best to be made for maximum damage. A more balanced solid starter set with the Lunastra update. With how powerful the guarding capability of Lance is, taking a Monster’s hit has never been this easy. Throw in Vaal Hazak’s Super Recovery armour set skill, you’ll naturally be able to keep Peak Performance going. If the blast isn’t your thing, they can easily be removed to give you nine Lv1 slots to play with. For boosting its damage further, swap the chest for Kulve Taroth’s Alpha Chestpiece, Mighty Jewel for Critical, and gem in for Critical Eye 4 and Attack 5 to have 100% Affinity on Weakness Exploit hitzones to push your Effective Raw to 425.

Is it safe to get out of Guard Stance? Probably is now if you’re able to push damage that high. The dropped Drachen set from Behemoth is no slouch for the damage department, it’s honestly too powerful for its own good and will be hard to eclipse thanks to the 4-5 skill per set piece on top of the Master’s Touch meaning no weapon can practically drop its sharpness now. That said, because of a whole host of AT Elder Dragons dropping some of my recommended sets will be outpaced. But that’s a heavy assumption you’ve killed them, plus this was never meant to be optimal damage otherwise you’d see only three weapons and requiring an unholy amount of luck for Jewels. Otherwise, Happy Hunting Hunters and become the stereotype tank of MonHun.