Unlike my previous hammer article (link), this is going to be a bit tougher to build for. But as much as people doubt the power of the horn for damage, it’s capable of inflicting KO to Monsters and is even better at exhausting them. Throw in the buffs and increased damage if songs are played at the Monster’s head, it’s quite an offensive weapon. If only said weapon buffs were applied at the start of the game, and weren’t nerfed compared to previous games. 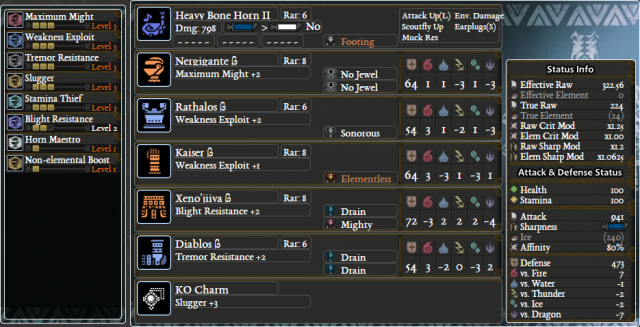 You probably didn’t expect a bone weapon here, but it’s here and it’s ready to play all of the great songs that’ll take most of the annoyances away. Environmental damage? Gone. Roars? Gone. Muck? Gone. The Attack Up Large is great when encored, it’ll become XL. A great boost to your group and solo game, since you’ll be ignoring a bunch of general annoyances. Of course Rocksteady can play the game for you, but it’s not quite the same when you can blast songs to nullify said effects for longer.

Something to note before I detail things, Sonorous Jewels/Horn Maestro isn’t a necessary skill. I’ve opted to include them into the build to make the “maintenance easier”, this is because during combat your highest DPS hitting moves will come from playing songs and performing encores for sound blasts. If you aim your blasts at a Monster’s face it will hit twice and deal more exhaust and KO damage. This set focuses on that, making sure you’re hitting the mark and keeping them staggered long enough. But if you’re struggling to play the more potent songs then HM will help more. Also, if you’re lacking decorations for any of these builds, it’s relatively easy to swap some of the armour pieces around to boost your attack. Armour pieces such as Zorah Alpha waists instead of Xeno and subbing the gloves for something else until you have access to Xeno and Teostra respectively. Similar to last one, trade empty slots and sonorous for Attack Jewels.

For the more damage-orientated builds, this is with you in mind. B52, otherwise known as Bazelguese is a Monster who’s grown infamy rather rapidly, rivaling the pickle and it’s no quiet matter. With Attack Up L, Health Rec S, and Rec Speed L, it’s a potent combo machine to lay the hurt in the most explosive of manners. Warning, weaponising Bazel’s roar may summon Steve as a mating call.

A relatively light build, the Lunastra chest piece can be subbed for anything else. An alternative is swapping for the Nergigante Helm (Alpha or Beta) and using the Rathalos chest for Weakness Exploit. An event friendly build, it’s sure to sound pretty sweet whilst you chase charms and roar your tunes into the Monster’s face to convince them to give you those coveted decos. There’s very little to say since the main bread-and-butter is just as much raw output as possible. The blast is a positive, but honestly there are really only two DPS focused horns: this and Jho’s. A solid pick for Elder Dragons in group hunts.

Surprised? You should be, Xeno is a Monster whose weapon list is rather lacklustre and is outperformed by many other weapons. Especially compared to the new event Monster drops. But, for group play I thought I’d at least give the squeak toy a mention at least once.

Songs wise, it’s not exactly top tier. But compared to everything on offer I think it’s got a very respectable build that’s a great empty slotter. The Dragonseal is not necessary, but with a Lv3 slot I thought I’d give it something useful against a certain windy Elder Dragon. Bow users will love you for the Stamina Use L, maybe Dual blades too if they’re not getting in your way. The Mighty Jewels are excessive slightly, swap the gloves for Teostra’s Beta for an easy Weakness Exploit 3. Handicraft Jewel is a bonus, but if you’re being staggered swap for brace. A bit of anti-annoyance build that’s focused on group play. My favourite part honestly is making the attack 777. 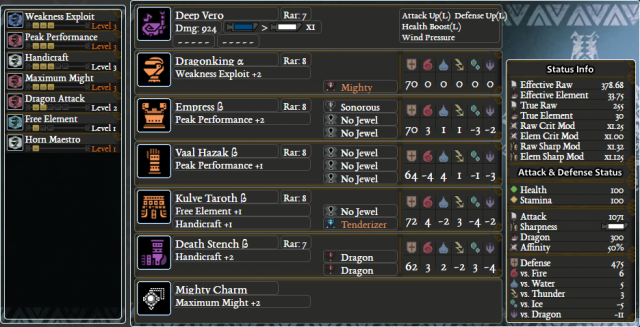 Given the raw, I'd go with Vitality and Protection to become a tanking horn.

He’s back, and he’s hungry, and he’s got a list of demands to shout at you with. Whilst numerically not quite as strong as the “siren bomber” build, this is a weapon set which can outshine it in some cases. The lower rarity means having Peak Performance 3 active is easier with an affinity and health augment. Throw in the 6 empty slots, swapping the Sonorous Jewel out can build Attack Boost 7, boosting effective raw to 414.41. This build isn’t that event friendly since Jho was dropped before Kulve and Lunastra. Both of these can be swapped for Kushala and Pink Rathian respectively for bump in sharpness to slightly offset the loss of Peak Performance.

Now the technical, opting for Critical Boost is an option however this isn’t as effective as it might seem. Sound blasts don’t crit, and since this move is a great burst DPS that can lead to faster fatigue build up, the swap will net a boost. Also, damage from said moves are affected by the song played and raw/elemental attack. This means opting for super crit builds isn’t that effective for Hunting Horn. That said, for every song you play, you will be hitting a Monster at least 4 times if you spamed Self Improvement: two for the notes, one for the initial play, and one from the encore. This means two soundblasts account for a third of your hits, at most. Realistically, your number of hits will mostly range between 5-7 per song since some recitals can have double hitting swings. This means you will need to factor if the potential 4/8/12% change from the base critical damage is going to overpower your sound burst damage (ignoring KO and exhaust damage). 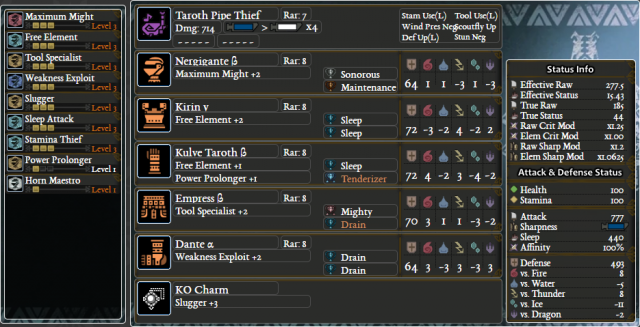 If you're not accurate for the finisher, swap charm or Drain Jewels for Bombardier 3.

Yeah I know, it’s the chicken and that is the weakest hitting build. But Kulu Yaku is a chicken, and great big cock at that, so let’s build around it. I’m opting for the Kulve just because it’s got 10% more affinity than its base version but this isn’t that big a do or die just an optimisation. Rocking 100%+ affinity thanks to the “Thief”’s high affinity, plus the Maximum Might and Weakness Exploit 3s, the option for an ultra crit is somewhat possible. But that’s not the aim, it’s being a great big cock and waking the Monster with a horrendous sound in their face. The extra Mighty Jewel is unnecessary, and if you augment for double affinity, the need for said skill is moot at 50% meaning Weakness Exploit 3 can just carry the weapon. Again, rocking that sweet sweet 777 attack.

Boasting as much stagger power as possible, this will sap a Monster’s ability to fight and will pair well against Monsters where Mantle usage makes or breaks a hunt. Prepare yourselves for possibly the most cheesable builds possible, ignoring genuine cheese mechanics. The only skill missing is Bombardier for the improved sleep bombing. Apothecary mantle makes an appearance again, with Tool Use L for a devastating combo. Designed more for teams/multiplayer this is certain not a top contender compared to other horns. But what’s the point of DPS builds if you just cart. Plus the song choice just promote survive, only thing missing is a health related one.

Doot doot! The sound of the Hunting Horn weapon and weapon builds are showcased. One of the easier weapon picks but harder to build, Hunting Horn is a supportive weapon for multiplayer and not having one orientated for that playstyle is a sin to the weapon’s functionality. But honestly, taking one of my Sword and Shields can net similar if not better results for support based play. Same applies to Greatsword, to a certain extent. Alas, I’m left confused on which is best since there is none for team play. But never forget, this is still a weapon at the end of the day and some say Hunting Horn players do exist who play songs for others in SOS flares.