With Monster Hunter: World out on PC, I thought I’d take the time to showcase some top weapons to build for. May the streamstones ever be in your favour. But really, with a little bit of thinking and Athena’s ASS (Armor Skill Search) you too can have equipment to chase for. In this list, I’ll feature three weapons that were part of initial launch, with the last two being event or DLC dropped weapons post-launch. A quick note, the values I list here are the Raw weapon values. The ones you see in-game are often referred as bloated values, factoring the motion value or the “power” behind each attack. Also, it makes it a lot easier maths wise to compare the Raw over the bloat values.

Oh Insect Glaive, how you’ve fallen from grace. Compared to its previous incarnations, this weapon has faced the most punishing evolution to World from Generations. Motion values have been reduced and generally seen a drop in damage overall, and reaching the previous hunting power requires a lot more optimisations to keep up with the other weapons’ raw unbridled power. Sadly I don’t see the Glaive getting any buffs. It’s not that the weapon is bad for damage, it’s just that it’s arguably the weakest weapon - not quite being a Swiss Army Knife - and has to sacrifice a lot to be a concrete damage dealer. At least there are good weapons to make up for, like the Kinsect’s upgrade of pure awesomeness and utility. 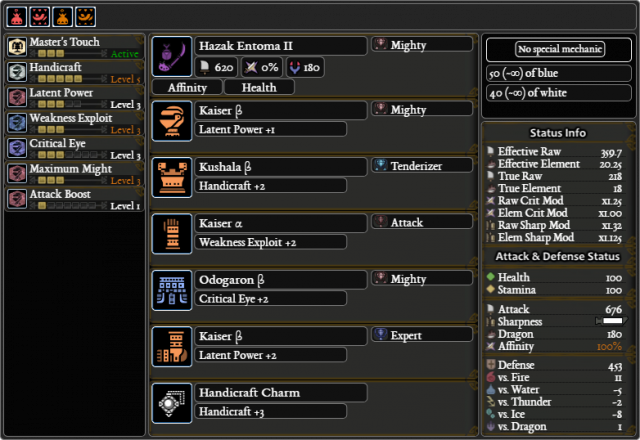 Once latent power kicks in it's good, but otherwise a solid set to get going into endgame.

Vaal Hazak here for one of the best Insect Glaives in vanilla, for the solid Raw and Dragon element. Not the best for element, this is very much the predecessor to Deviljho’s Glaive in terms of power and reliability. Compared to other offerings, this is going to outpace some of the Critical Element builds for some Monsters thanks to its solid white at Handicraft 5 that is much better than the Tyrannis Glaive II for upkeep. That said, before Drachen and Arch Tempered Monsters. This is one of the few weapons that can be geared for Master’s Touch to keep its white sharpness.

Not an easy build, but if you’re lacking the decorations you have two alternatives for it. When Latent Power kicks in, the weapon’s affinity will raise to 30 (80 with Weakness Exploit). Swap the waist for Odogoran’s Beta for Critical Eye 2 to ease the Expert Jewel needs and augmenting for Affinity once will net you 100%. Not the most optimal setup, especially because Latent Power just rewards negative play (activating after 5 minutes or taking 150+ damage). Or opt for Nergigante’s Head (your choice), and change the waist for Teostra and add a Mighty Jewel or three Expert Jewels to cover what Latent Power won’t. But if you’re in the mood for more damage per hit, then check the following build. 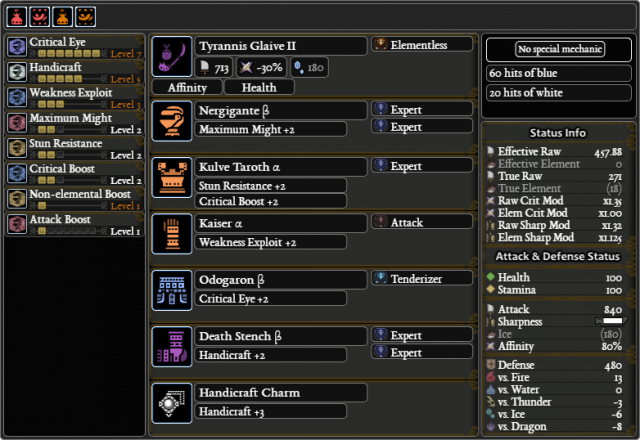 Very niche and reliant on polish, assuming you can kill in a minutes it's viable.

I will admit my opinion of Protective Polish is very biased against it, but in certain situations it can be very good. Especially for weapons where your opening is heavily reliant on creating an opening, such as Longsword getting into red or getting the first mount on Insect Glaive. Ironically, it is counterproductive to have red extract if you’re trying to mount because the last hit does the mount damage. This means your initial several hits do nothing but eat your sharpness for not a lot of damage (unless you have a crit element build, but even that’s a push).

It’s because of things like that, that make the Insect Glaive less fun. The overall reduced motion values to everything compared to Generations (less so for 4 because that was almost too powerful for its own good) and the change in combo style just feels like a gutted version. We got movement, but at what cost? Rant aside, if we’re supposed to be more stationary than here’s my counter offer. Pushing as much Raw as possible, sustaining that white isn’t as feasible this is a solid variation that I’ve used sparingly, but that effective 40 units of white and rock bottom negative 30 affinity is only good on certain monsters like Tier 1 Tempered Monsters, and maybe Odogaron’s fleshy body. 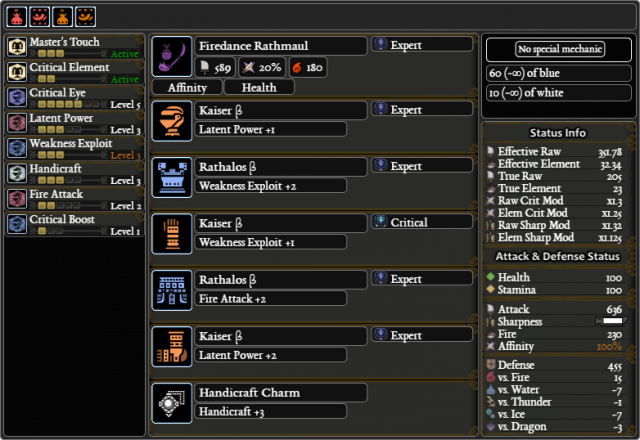 Easy white and Master's Touch, it's fun, I can't say much else. IG just prefers raw.

When I make these sets, I try not to keep the same build style to keep them as varied as possible. But my desire for maximum weirdness compels me, and here we have my personal favourite build that gets a rule of cool and solid damage. What I’m dubbing “blazing hot white beat stick” Glaive build has something I’ve always lacked and that’s an actual Handicraft Jewel, that was until PC came out and I managed to minmax the set slightly better. Taking my original base template of Critical Element and Master’s Touch build, which you can apply to nearly any Dual Blade thanks to its open slots, I applied it to the Insect Glaive I saw as hunting with style.

Handicraft 4 isn’t necessary and that one Handicraft doesn’t make or break this set, it makes it easier to manage. But, like the Hazak Entoma build, the Latent Power helps push the critical hit chance to 100%. Even without the decorations, you’ll be able to keep the white somewhat well if you’re grounded. But once Latent Power kicks in, you can send yourself flying and know that at just under half your hits won’t eat your sharpness. And post Kulve Taroth and Arch Tempered Teostra, this weapon can gain another 35 Effective Raw (double augment for damage to get 50) by slotting for Critical Boost 3. It’s just “blazing hot white beat stick”, I can’t help myself. 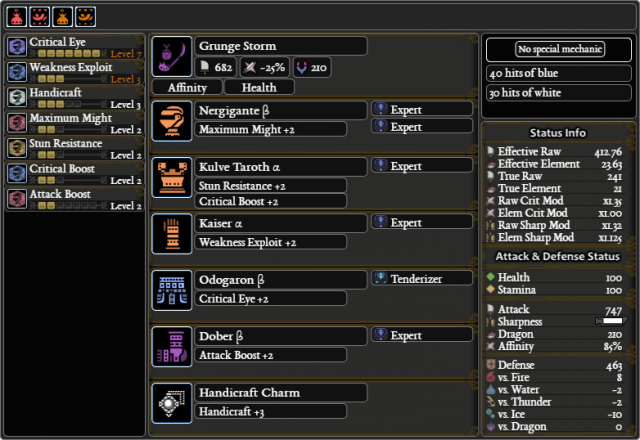 Post drachen this is best in slot for weapons, even after Kjarr Weapons.

When I’m more hungry for damage, I’ll bring the Apex Monster Pickle-jho. Hitting a higher Effective Raw off the bat, this is my most starter like set for Insect Glaive. Not needing a lot of decorations, this just needs a Tenderizer Jewel to raise its potency. Handicraft 5 is something I would try and squeeze in, but it’s not that necessary and it’s got a solid enough length of blue sharpness that I’m not as concerned compared to previous variants. As much as the damage boost from red extract (and its combos) is multiplicative from the weapon’s Raw, it’s enough to keep the blue from being significant compared to base damage. That said, this can easily swap the legs for Deathstench Beta should the white sharpness be too temperamental for you.

Post Behemoth/Drachen set, this becomes arguably the most powerful weapon to wield with maybe one or two noticeable caveats for most effective Raw. It’s main drawback is the -25 affinity, but you can comfortably have an affinity/health augment combo and keep your 100 affinity. That said, there is one Glaive that I think could beat Grunge in terms of Effective Raw. 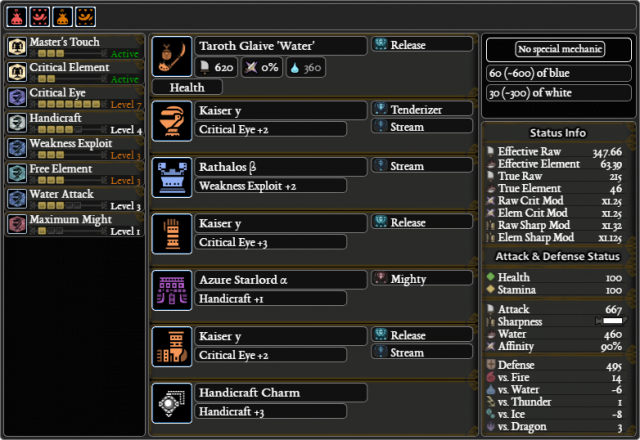 It's niche, but it works considering Teo makes a good bulk for late game. Kjarr takes over

Sitting at neutral affinity, hidden element, and low Handicraft requirement for white sharpness. If you’re running MetaHemoth set, this will beat it by about 5 Effective Raw. But, when you factor the Dragon Element, sadly this will lose out. Alas, the Pickle dominates all. That said, this is an insanely good Water element Glaive and is nicely paired with Critical Element. Packing 460 Water once unlocked and with Water Attack 3, this more than makes up for its slightly diminished Raw. Plus the Handicraft 4 just gives this weapon a lot of leeway for dominating on the ground, just don’t expect the same performance in the air.

Unfortunately, even with the AT Teostra’s Gamma set, you’re not able to have Master’s Touch and Critical Element with 100 Affinity, white sharpness, Free Element 3, and Water Attack 3 (minimum). Reaching white will get you 20 units, 90 affinity, and Water Attack 3, but you don’t have the safety of health augment. Not an impossible to use set, but it’s very geared to time attack running. At least we know that if a weapon is supposed to be highest damage, Crit Element sets still favour the Rath-astra combo, or Teo-los if you prefer.

And that’s it, the last of the Blademaster weapons done before range and their inevitable volley. Okay puns aside, I’m still a fan of Insect Glaive and I do run it from time to time. It’s just not as powerful as its predecessor, and the aerial part being as fun as it is just makes you question its viability given that other weapons can easily mount the monster’s in a hop, skip, and a jump. That said, the bugs have become ridiculously good as your partners, matching the weapon’s fantasy of synergy. I can forgive the lack of static buffs because of their new dust and marking mechanics. Now if only they’d stop stealing my kills, until I figure out how to stop them kill stealing. Happy Hunting Hunters.