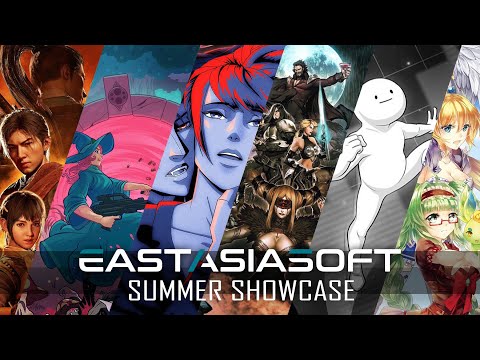 Publisher eastasiasoft have had their 10 minute long Summer Showcase, showing off titles they've got scheduled over the next couple of months.

Things started off with a look at Crimson Spires, and how it's coming to PlayStation 4/5, Switch and Xbox One. It's a visual novel, but has 3D exploration sections - kinda like Danganronpa.

Then we saw the Xbox One release of Omen of Sorrow. A fighting game with monsters of classic fiction, such as Frankenstein's Monster, it was previously released on PlayStation 4.

Drunken Fist was next, making its current generation console debut on the PlayStation 5. Play an inebriated man as he has to fight his way home across seven levels full of tipsy fisticuffs.

Next up was the Switch release of Macrotis: A Mother's Journey. A platformer which sees you controlling a mouse-sized being as you try to reunite with your family.

Having launched on PC late last year, the hack-and-slash Xuan-Yuan Sword VII was up next. It will come to PlayStation 4 and Xbox One in Summer 2021 with improvements to the English language version.

With the first confirmed release date of the video, we saw Paradox Error, coming to PlayStation 4, Switch and Xbox One. A different twist on the platforming genre, it sees the game changing as you play, whether it's things in the game (intentionally) glitching or disappearing, to the aspect ratio shifting. It's coming out on 9th of June.

Pretty Girls Klondike Solitaire was up next, another game that previously released on PC now coming to console. As you might expect from the name, it's solitaire, but there are 10 ladies there to challenge you. It's coming to PlayStation 4/5 and Switch on 17th of June.

Then we saw the turn-based tactics RPG Empire of Angels IV. Originally released on PC in 2016, you'll soon be able to join the investigation team as they patrol Asgard, when it releases on Switch, Xbox One and PlayStation 4 on 23rd of June.

Mina & Michi was our penultimate game, giving us a look at the co-op game, released on PC in 2020. It's coming to Switch, PlayStation 4/5 and Xbox One on 30th of June.

Which meant that things finished off with Trigger Witch, a violent - yet cutesy - twin-stick action game. Take on monsters using a variety of weapons, and by weapons I mean guns, and by take on I mean 'turn them into blood splatters'. It's coming to PlayStation 4/5, Switch, Xbox One and Xbox X|S in July.