Tips and Tricks for Finals in Fall Guys: Ultimate Knockout

You’ve made it this far. You picked the right doors. You memorised which platform to stand on. You conquered Slime Climb. You’ve even scored some goals in Fall Ball. Your moment of truth has come. Will you go home with the crown, or will you be back in the main menu empty-handed?

As someone with around 20 crowns to his name, I think I can comfortably say I might know a thing or two about Fall Guys: Ultimate Knockout. Below are a few helpful tips and strategies for you to consider when approaching the games assortment of final rounds which separate the victors from the vanquished.

An early strategy for this event was to plummet straight to the bottom layer of hexes and make a massive hole for your competition to fall through. Chumps do that. Here is how you win. 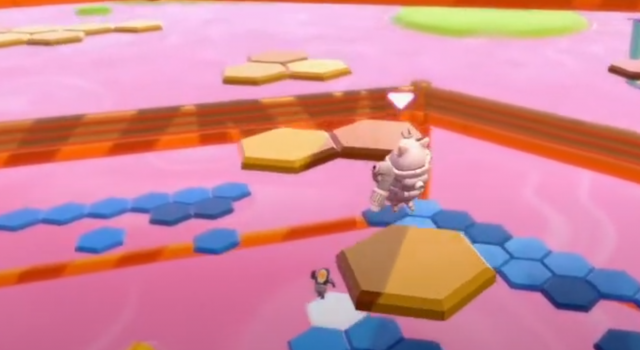 Plan ahead. Make your own space. Cut off the competition.

Stay as high as you can, for as long as you can. From your starting hex, you can create a small window of opportunity to plan your drop to the next level by diving to a neighbouring hex, if there is one available to you. Otherwise, drop down and join the chaos.

In the early stages of Hex-A-Gone, it’s okay to run around a little. However, don’t do so aimlessly. Your objective is to carve yourself a nice section of hexes to hop your way through slowly. Take note of where your enemies are, cut their paths off (a gap of two hexes on all sides of your area is generally sufficient), and once you know you have a healthy amount of hexes to yourself, start slowly hopping from hex to hex. If you fall through, don’t panic, repeat this process until you have set yourself up for slow hops.

Alternate between carving out your personal space and cutting enemies off, and slowly hopping around your private section. Believe it or not, it’s okay to dive to a distant hex. You can somewhat cancel the animation of your player character getting to their feet by spamming your jump button - just make sure you’re jumping somewhere. Always remain one step ahead of your competition. If you’re running low on hexes on your level, start looking around at the next floor to see where your next destination will be. Right now is also an excellent opportunity to potentially cut an opponent off and send them on their merry way to the slime below.

After the mid-season update, the optimal route to the summit of Fall Mountain remains pretty much the same, with a few extra deadly spinning hammers thrown at you towards the top.

The guidance below is for a perfect run, where you haven’t been outwitted by the game’s strange physics. Sometimes a rogue boulder will come into your path. Adapt, dive, don’t give up. You can always come back. 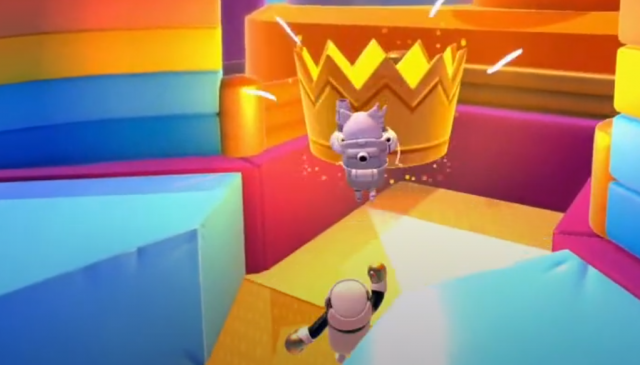 Off the starting line, you’re going to want to take a dive off the orange platform that all players start on. While you’ll take a moment to get back on your feet, in doing this, you mitigate the risk of being knocked around seemingly endlessly by your opponents.
For the next stretch of the dash, you will want to beeline slightly to the right of the middle. In most cases, the first boulder rolling down the mountain will go down the right side of the spinning gate, leaving you an opening to proceed further.

Past this gate, you will want to use the diamond-shaped bumpers as cover from the rest of the boulders rolling towards you. Once you reach the upper diamond, take a hard right and hug the edge of the map as you proceed towards the hammers and the summit.

Finally, the hammers. Always follow the direction the hammers are swinging in. In doing so, you eliminate the risk of being knocked back by going against the current. It is always better to be knocked forward,rather than backwards. If you can afford to stall for a moment to avoid being hit, you can, but do so sparingly. The chances are that your competition is right on your tail.

Now, for the moment of truth – the crown dangles before you. If the stars have aligned and the crown is descending towards you as you come into range, jump for it. Remember to press R2 to grab the crown (you’d think that’s obvious, but I’ve seen this be the pitfall of many players). If the crown is out of reach for that moment, stay calm and don’t panic. Turn around, run back a few steps, and align your timing to be able to reach the crown. Doing this will give your jump just a little more momentum and maximise your chances of grabbing the crown before an opponent does.

This is not an event for ladies and gentlemen. This is an event to play like an absolute slimy degenerate. Learn from my past gentlemanly mistakes, and you’ll find yourself winning this one more and more often. To begin with, you want to be positioning yourself so that you don’t go down with a collapsing platform. Sometimes you can get lucky and be there from the very beginning. However, in most cases, there will be some precarity as to whether the platforms on your end are going to collapse. If you’re standing on a singular platform and there’s a row of three platforms separate from you, it may be time to get out. Go with your gut.

If you find yourself in the sub-optimal position of having to migrate to a different platform, do it as soon as you possibly can. Whenever possible, jump clockwise from platform to platform, following the path of the spinning pillars of doom. Do not go counter-clockwise unless you have absolutely no other option – it’s not likely to end well for you.
Once the playing field is no longer in question, it is time to survive. Stay out of the way of other players and always assume malicious intent. Judge where you need to be standing for your next jump so that you don’t get collected by the slow-moving upper pillar.
Unless you get very lucky and your remaining opponents go down in one fell swoop, you’re likely to end up with one other player hoping to survive. It’s time to be a snake. Make sure the lower pillar is spinning relatively fast. As it is coming around, grab the poor schmuck you’re about to rob. Let them go when you’re both mere frames away from being hit, and dive for your life. You’ve just gambled, and you’re both likely plummeting towards the slime right now. However, since you came prepared and saved some verticality with your dive, the odds are relatively high that you’re about to be met with a victory screen. Are you feeling dirty yet?

Of course, if you’re not a degenerate like me, you can always try playing mind games. Start grabbing the last opponent or two intermittently in between jumps. They will start avoiding you, potentially lose their cool, and eventually slip up. Better to get inside their heads than let them get to you first. Take it from someone who has fallen many times trying to play like a gentleman. The sooner you start messing with other people early, the more likely you are to succeed here.

If you’re like me, this event doesn’t pass you by exceptionally often. It’s also literally winner takes all tail tag. With that said, there are a few ways to increase your chances of nabbing the crown. 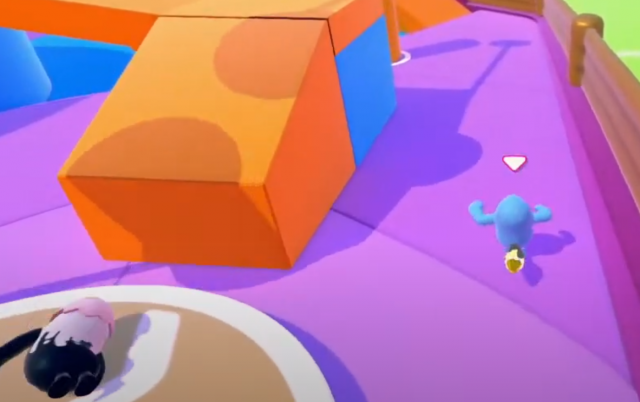 Anticipate their movements. Steal the tail. Keep them guessing.

Firstly, be patient. Whoever has the tail is likely to slip up, unless they are a god-tier player. Anticipate their movements - try not to pursue them beyond a hammer, you’ll likely be knocked back. Instead, try and counter the path they are taking. If they are approaching the corner of the map, then cut them off from the other side.

If you’re holding the tail and you still have much time to kill, you can try wasting some time on the revolving platform in the middle of the arena. I’ve seen many players kill an easy 20 to 30 seconds just running around and around on it. When players start closing in on you, or getting close to stealing your tail, get out of there.

Otherwise, if you have the tail and you’re in the final 10-20 seconds, stay frosty. If you’re being approached from either end, take a right-angled dive away from them. Do not under any circumstances become complacent in the last second or two as I have in the past. It’s not over until you see that timer expire entirely.

What are some of the winning strategies that you have been using in Fall Guys: Ultimate Knockout? Let us know in the comments below!

Tips and Tricks for Finals in Fall Guys: Ultimate Knockout