Please note: there were some issues with the Twitch stream at the beginning of the show, so some information may be missing.

After a few minutes of the stream refusing to load, we are greeted by Aaryn Flynn, who’s here to talk about Dragon Age Inquisition. In between the stream dropping out we are able to gather that there will be nine classes, over 20 specialisations, more than 200 abilities and more than 200 weapons and upgrade schematics. Combined with the extensive character creation, Inquisition makes it easy to look how you want to look, and fight how you want to fight. They also showed Skyhold - a home fortress where you can take on missions and gather troops strengthen the Inquisition and help you take on the main enemy, similar to Galactic Readiness in Mass Effect 3.

We are then shown a gameplay demo in which the hero, a human female warrior, alongside Blackwall, Solas and Cole attempt to storm an outpost and save some soldiers from the undead minions that occupy it. We see the tactical element of combat, which allows the player to pause the game and queue up movement and attacks. The visuals are very impressive, from the gloomy, rain-soaked environment to the flashy combat which sees the screen filled with fire, electricity, ice and other impressive particle effects. Dragon Age: Inquisition will launch on November 18th. 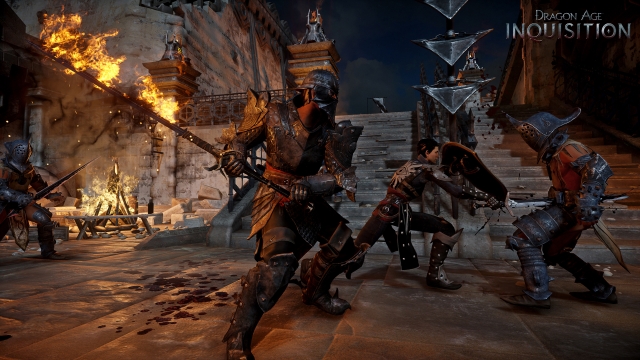 A couple more connection drops and we rejoin the show with NHL 15. A trailer is shown that displays the game’s increased focus on recreating an authentic hockey crowd atmosphere. NHL 15 will be available on September 12th, with a demo hitting worldwide on August 26th.

EA COO Peter Moore now welcomes Rachel Franklin to the stage to talk about The Sims 4. We get a look at Create-A-Sim which shows off an interesting take on Peter Moore, complete with six pack and tattoos. You are able to easily create a unique Sim by dragging facial features. This works in Build mode too, as walls and rooms can be drag-and-dropped anywhere you like. There’s also a content sharing system in which you can buy custom Sims and buildings, such as a user-made football stadium or batcave. A Sims 4 Create-A-Sim demo is available for free now on Origin, and the full game launches on September 5th in the UK. 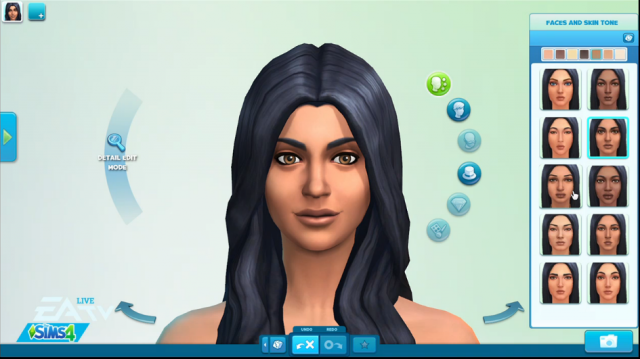 Mike McCabe comes onstage to talk about FIFA World, a free-to-play FIFA game. Before the new year EA will be relaunching the game on a new engine. Fifa World is available now at fifaworld.com

David Rutter is here to talk about FIFA 15. Unsurprisingly, they have no doubt that this is the best FIFA yet. Apparently due to ‘popular demand’ the Turkish Süper Lig is back. A new system called Match Day Live keeps you up to date with the current real-life leagues and statistics, working in partnership with Goal.com. Ultimate Team now includes the ability to loan players and take part in friendly seasons. They also touch on Legends which was discussed at the Microsoft conference and allows the player to buy footballing greats such as Bobby Moore and Pelé . They’ve got a greater focus on goalkeeping, employing Tim Howard to perform motion capture for the game. It will launch on September 25th in Europe, 23rd in North America. 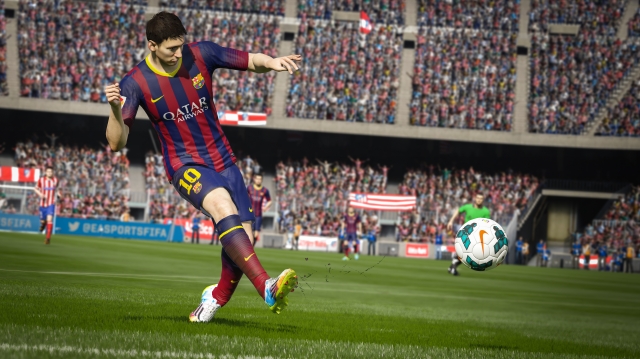 Matt Bromberg now graces the stage to talk about Star Wars The Old Republic. He tells us about the changes they’ve made to the game since it launched, from making it free-to-play, to adding guild rewards. Galactic Strongholds, the third expansion for SWTOR launches next week and will allow players to create their own stronghold on Tatooine, Coruscant and other iconic planets, as well as adding guild warships. These features will become available on August 19th.

MOBAs are the big thing at the moment, so obviously EA is jumping on the bandwagon with Dawngate from Waystone Games. Dawngate is a brand new MOBA built on a foundation of player choice for any race, character and playstyle. The game is apparently growing a community in Europe, and so EA will be launching EU alpha servers soon. You can join the beta at dawngate.com. Following a recent series of teasers, Bioware now announce a new RPG IP, Shadow Realms.  A trailer shows guys fighting demons in an urban environment. It looks quite a lot like The Secret World. Jeff Hickman from Bioware Austin provides some more details on the game, stating that it will be a four-versus-one game where four humans take on the Shadow Lord, who is also player-controlled. Story will be rolled out episodically, playing like a TV show. It will be available for PC late next year. You can sign up for the closed alpha at shadowrealms.com.

Steve Papoutsis is here to show the single-player debut for Battlefield Hardline. It has a very different feel to the mainstream Battlefield games. A cutscene shows the protagonist, Nick Mendoza and his friend Boomer - who back-and-forth like characters out of a teen comedy - as they get taken prisoner by Boomer’s girlfriend's dad. They get locked in a cell, but break out and sneak up to a group of enemies. There’s an increased focus on stealth, with the player able to throw objects to distract enemies and sneak by. Soon, they come to a large outpost and use a scanner to tag enemies and items before deciding whether to get into the camp quietly or take them head-on. It’s very Crysis-esque, and after showing off some of the non-lethal methods, the player is seen and shit hits the fan. Here it becomes pretty typical Battlefield gameplay, before the player climbs a tower and deploys a zipline to escape.

Onto multiplayer - they’ve announced two new modes for multiplayer. Hotwire - which is based around high-speed car chases - and Rescue - where hostages have been taken by five criminals, and must be saved by five policemen. It’s one life per round here, so it’s sure to be an intense mode. They’re keen to ensure that Battlefield Hardline going to be stable at launch in 2015.

That’s it from EA. A decidedly Bioware-heavy show, but there was lots of gameplay to be seen, unlike EA’s E3 outing. With no more word on Mirror’s Edge 2 or Star Wars Battlefront, some fans may be a bit disappointed, but the publisher found a decent mix of existing franchises and new IP in their presentation.