When I reviewed Company of Heroes 2: The Western Front Armies back in July, I had this to say: “Relic seemed to have missed a trick by not including a Battle of the Bulge scenario - they’ve got the snow and the two armies involved, all they needed was a tenuous narrative link and a few objective ideas and mission layouts.” Little did I know that a completely different team within Relic was working on an expansion (I’ll call it what I like, damn it!) alongside the multiplayer-only pack based entirely around the Battle of the Bulge.

So I’ll take a moral victory on that one, then fling my hands in the air to celebrate the fact that Relic thought of it long before I did. Company of Heroes has become a series associated with its incredible multiplayer, so much so that it’s easy to forget that the franchise has a long history of fantastic campaigns. Following a session with Creative Director Quinn Duffy and Lead Campaign Designer Mitch Lagran, I have little doubt that the new standalone expansion, titled Ardennes Assault, will continue that legacy. 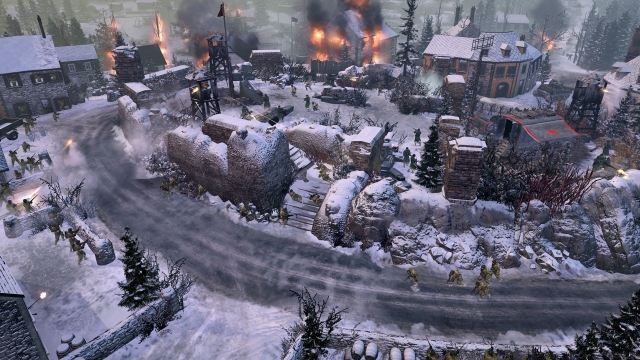 Ardennes Assault is a single-player only campaign focused on the US and Oberkommando forces of the previous DLC, although the whole thing will be viewed from the American side of the conflict. Quinn Duffy noted that the “creative goal is to portray the character and tone of the armies and the event as one of the pivotal American battles of WW2.” The Battle of the Bulge in December of 1944 isn't the most famous of WW2 battles, despite starring in the gargantuanly famous Band of Brothers, but it’s a rich point in history to draw inspiration from and arguably a perfect location for a COH campaign.

The mode will feature a whopping 18 unique scenarios, that’s more than in the base game by the way, all providing differing challenges from stout defences to city assaults, and will come with a host of new single-player features. Chief among the new features is a persistent company system that allows you to use your troops from one battle in the next - so long as you keep them alive, that is. “Losses you sustain in each new mission will carry on with you for the rest of the campaign” Lagran told me, “so we’re really encouraging players to think things through tactically and try to understand how they can tackle a situation without losing too many of their men. it’s not just whether you win, it’s how you win.” 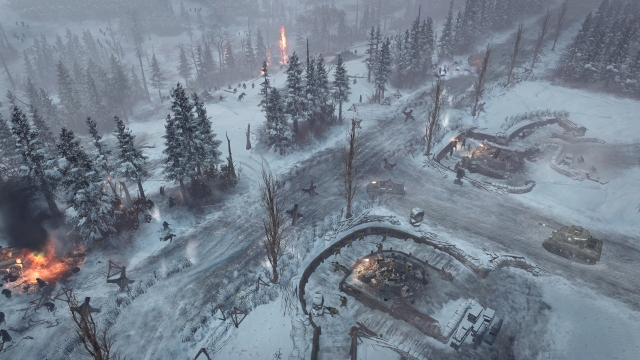 It’s a great idea that possibly stems from Relic’s time with the Dawn of War franchise, but it makes a lot of sense within the Company of Heroes 2 ecosystem. The online game has always been about preserving your best troops and taking few casualties, so it’s good to see that this has now been transferred over to single-player. To help you keep your boys from going home in a wooden box, Relic has now re-introduced sitreps as a pre-mission introduction. “The idea here is that players can watch them and rewatch them and understand the strategic situation before they even get into the battle. So hopefully because of that they’ll be able to make better informed strategic decisions right from the get go.”

Duffey and Lagran weren’t willing to share details on how the continuous company system will actually work in the final game, but one can assume that veteran units will be recruitable from buildings at a higher cost than base recruits. Still, it’ll be interesting to see how Relic works it out. Just incase pre-game sitreps aren’t enough help, Relic has now added a post-match report, delivered by the commanding officer, that changes based on how you approach the level. Larant claimed that “it’s really important for connecting the player’s actions to the narrative as well as connecting the player more closely to the soldiers and the lives at stake.” With over 80 possible variations per mission, this’ll be a cool little mechanic to see across the entire campaign. 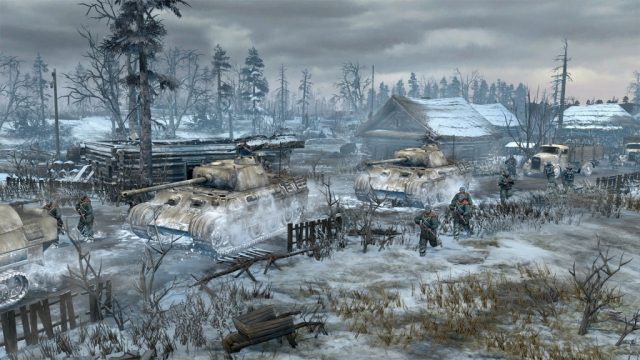 As for the missions themselves, Lagran and Duffy were keen to point out that the Ardennes Assault campaign will feature levels that are a lot more open than before - giving players more strategic choices on the battlefield. The mission I got to see followed this doctrine: while a road down the middle was very heavily defended, Duffy could choose which flank he wanted to approach and while he chose the right flank, he could’ve easily attacked both. Or, if he really wanted to, built up resources and storm the central road - although obviously that wouldn’t have been great for his troop preservation.

The whole campaign will let the player mess around with three different companies, each with their own specialties and officers. On the whole there should be plenty of variety on offer, even if the campaign is based around one, relatively short, part of the war. Company of Heroes 2: Ardennes Assault looks to be a real treat for those, like me, who adore the single-player offerings of the series and look back on the original COH campaign with dreamy eyes. The Russian campaign from the base game was great, but never quite achieved the same quality as its forebearers - a point exemplified by the awful story. This time, it looks as though the player will be creating the story; a story of survival, brotherhood and battle within the Ardennes snow.

Company of Heroes 2: Ardennes Assault launches on the 18th of November for PC. 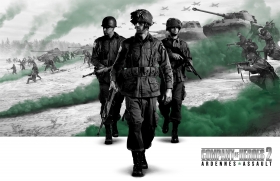