Before I head into this preview, allow me to indulge in a bit of shameless self-promotion - it’s relevant though, I promise. I once wrote a series of articles called Sofa Sharers, all of which focused on the history and future of local co-op gaming. If you’re a fan of the mechanic be sure to check them out, but before you do, let me tell you about Tristoy - an intriguing split-screen only platformer from a small German developer called Uniworlds. It’s a perfect demonstration of the potential of local co-op, forcing players to work together, strategise and ultimately have more fun because of it. Towerfall: Ascension has all put proven that there’s a sizeable market out there for local only games, and Tristoy could well be the first game to exploit that market since.

The game centres around two mysterious individuals; a small, quick chappy and a lumbering boulder-carrying big-guy. He doesn’t just do that for fun by the way, he was a prisoner on the giant island of Tristoy. Now the two must team up to escape from the island. Uniworlds hasn’t released much info on the game’s story as a whole, but the word so far is that Tristoy will feature a non-linear tale in which the players collectively make choices that impact the narrative. I saw some of the multi-choice sections in action and they looked deliciously well-written. The team showed me an interesting character who’ll appear periodically throughout the game; he speaks in rhyme and has some odd things to say about our little adventure. 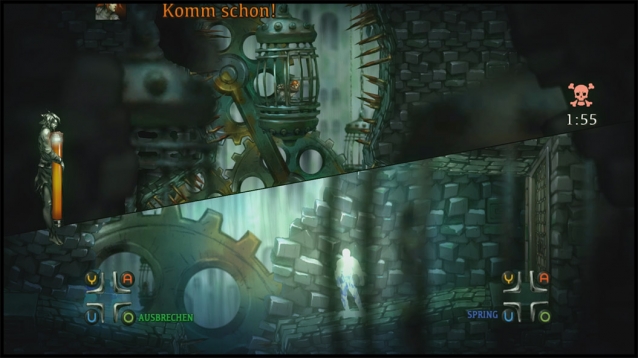 Commitment to quality writing is always a good sign, especially when you’re shown some fantastic stuff that wasn’t even in the dev’s first language. Plus, with over 2000 lines of dialogue in the game, there’s bound to be a lot of diversion in the storyline. Of course, in a small indie game that’ll only take four to five hours to complete, gameplay is ultimately king. On this front Tristoy is shaping up to be a wonderfully focused title - the Uniworld team is adamant that the game is designed for two players, “no more, no less”. So each puzzle that the players must face can only be completed with teamwork and an understanding of each others’ abilities. Co-op isn’t just a fun aside to the main concept of the game, it is the main concept of the game.

The sections that I tried all demonstrated this idea; for instance, while enemies could be stunned and weakened by one character, the other was required to finish it off. Puzzles too demanded that me and my partner communicate effectively, and while one of us could work it out alone, we needed to be able to explain the solution properly to solve it together. This kind of genuine co-operative play is really quite exciting to see, and the fact that it’s all playable in local co-op makes it all the more interesting. Uniworlds has also implemented a dynamic split-screen that twists, turns and joins together, similar to the split-screen from the LEGO franchise. Personally, I’m not a fan of the mechanic, but that’s not exactly a major drawback and it’s sure to be a point of interest for others. 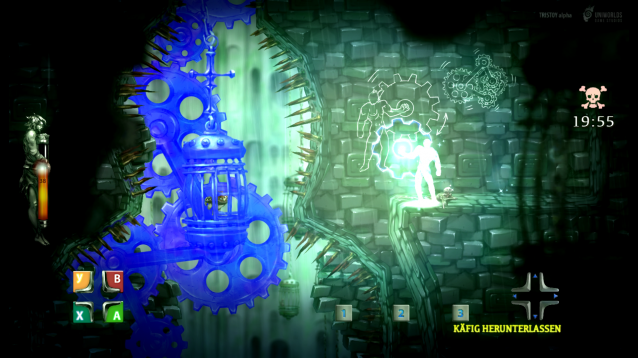 During my time with the game, Uniworlds’ Manuel Scherer did seem a little concerned that the team are limiting their market by making the game local co-op only. It’s a gamble to be sure, but from what I’ve seen so far, it’s a gamble that could pay off very well. Not all gamers have friends nearby that they can play with, but there’s a big, big market made up of those who are willing to make the effort. As a university student myself, I can’t express how great it is to see local co-op games starting to come through the cracks. Plus, as the writer of Sofa Sharers it’s endlessly satisfying to see a game like Tristoy make its way towards release. Split-screen may have been strong-armed by online gaming a while back, but that doesn’t mean it can’t have a place in the modern gaming industry. Tristoy is looking to be a perfect demonstration of the still-pertinent powers of local co-op, and I’m excited to see how it develops and ultimately how well it’s received.

So, is it possible to play alone? Or co op only?