The Batmobile squeals into view, driving at speed along one of the numerous bridges that dot Gotham City. In the distance GCPD cars can be seen surrounded by figures. As we approach we also get a view of the Ace Chemicals building that the aforementioned bridge connects to the rest of the city. A screeching halt and Batman exits the vehicle to converse with the familiar face of Police Commissioner Gordon.

As we’re informed that the Scarecrow has taken over Ace Chemicals an interruption, in the form of a heavily armored helicopter, flies onto the scene. Within seconds it has blown the only entrance to the chemical facility up and while police run from the explosion, Batman walks towards it meeting the attacker head-on.

This is our first glimpse of the brand new character that Rocksteady has been working on so studiously since the release of the Arkham City: The Arkham Knight. With a look heavily inspired by the Dark Knight himself, this new villain is instantly recognisable. His voice is garbled by an electronic voice changer and he hides his face completely to throw anybody already speculating on who this new character could be, right off the trail. Instantly the sights of the helicopter are trained on Batman and we’re made aware that the this new enemy is no joke. He wants Batman dead, and he doesn’t care how. 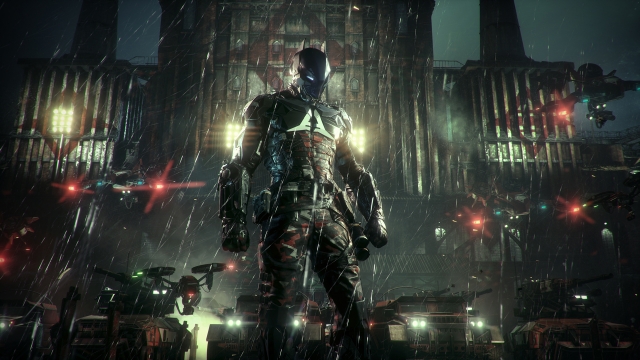 This is a nice change of pace for the games, as the previous Rocksteady Arkham games have focused on the Joker and his fun-and-games trials he enjoys putting our hero through. The notion that Bats may very well be in serious danger of death this time is a nice feeling. Something serious to fight for.

At this point Scarecrow tells our new villain that he will have his revenge but to leave him for the time being. This leads us to our first glimpse of gameplay in the latest Rocksteady installment. We glide effortlessly up to the top of the gated entrance of the chemical facility with the aid of our trusty Batclaw. The second we’re up there we’re treated to some more story and our first target set up in the form of a terminal we need to hack to see what’s happening within the compound.

We descend inside a very conveniently placed vent and come out under some familiar grating to show off one of the new takedowns: the fear takedown. With a tap of the square button, our hero jumps from the grating and tackles his first enemy and time slows down. We have a short window of opportunity to line up the next victim as we do, we press square once more. We’re then treated to another lovely takedown animation. This is then done a third time to show that it can be chained. If this is something that can be achieved ad infinitum is never explained. 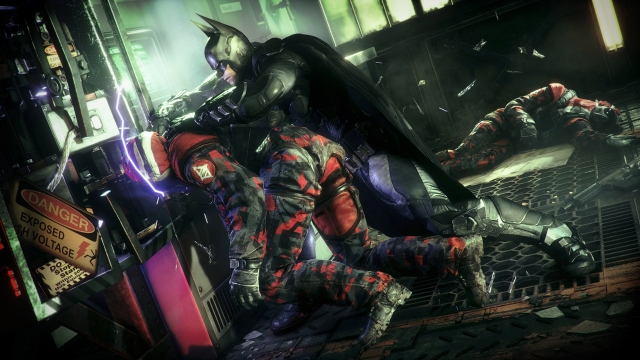 After this we hack the nearby terminal and are told several workers are being held captive and so we go on the hunt. The next new gadget shown is the Radio Batarang. This allows us to pinpoint the employees’ locations through the playing of a simple minigame. Our first worker is in a building directly below us and so we get to work. Diving down, we’re now given the new option to glidekick into the room through the skylight. We do this with another simple button press.

After our entrance we’re greeted by some thugs who are less than happy to see us. Introduced now is the notion of environmental takedowns; context-sensitive attacks that are triggered by a simple combo of buttons hit at the same time. The satisfaction this brings only adds to the lauded combat system that we first introduced in Arkham Asylum and perfected in Arkham City. But, this was not quite all we got to do.

After dealing with the henchmen in the room we just unceremoniously barged our way into, we find out the worker in here has been killed before we could save him. And we need something a little more powerful to get to the next hostages before it’s too late. On our weapon wheel we select the new Batmobile option. With a press of the D-pad we’re in remote control of the vehicle and are asked to enter ‘Battlemode’ which arms the Batmobile with several tools to get most tasks done.

We attach our harpoon to the already destroyed bridge and pull it up to create a ramp. Then we switch back to the default vehicle and use our afterburners to make the jump. As we do so we’re attacked immediately by a new enemy; the battle tanks. These guys come in several different shapes and sizes and are easily dispatched with one of the three different weapons we were given access to.

The Batmobile handles so well in both combat and default modes that it makes these sections a pleasure. Rocksteady seem to have understood that by introducing something as game-changing as the Dark Knight’s personal ride, it needs to be fun. One bad design choice with the handling would have created a frustrating experience and a sense of dread in having to use it. As it stands, I didn’t get enough of the new addition and I really can’t wait for my next chance to play with it some more.

Zooming forward a little we reach a second hostage who is tied to a large pipe in a room with only one entrance and a reinforced glass wall. As we enter the room and talk to the captive, The Arkham Knight, and several of his henchmen, enter the room the other side of the glass and thus begins a more fleshing out of the title protagonist. 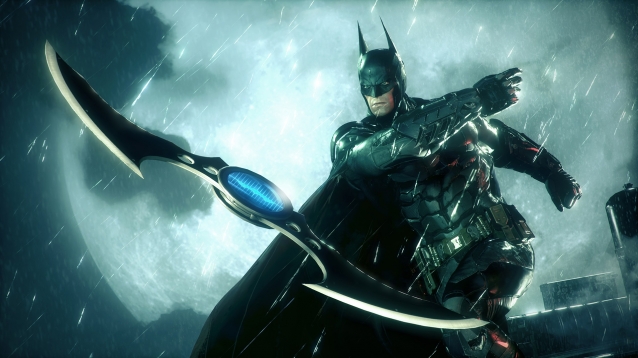 We’re then introduced to our final new mechanic of today’s demo. The Batmobile-assisted takedown. This is most probably the most context-sensitive takedown yet put in the game. With another push of the D-pad we’re given control of the Batmobile’s riot suppressor and we start to take out henchmen. The last one blasts through the glass and gives us instant access to the room beyond allowing us to take out the enemies. And again with a press of a combination of buttons we can make use of the signature vehicles takedown ability whereby Batman knocks an enemy into the air and they are hit with a riot suppression round.

Overall, the impressions of Batman: Arkham Knight so far are one of positivity. With plenty of new additions to the formula (something that was sorely missing from Arkham Origins) there seems to be no reason to doubt that Rocksteady will deliver another game-of-the-year contender.