Killing Floor was a game that took many people by surprise. It's simple, arcade-y look and excellence for playing with friends made it a favourite for many people, both co-op enthusiasts and solo players. Now, six years down the line, after tons of free updates and DLC that made Killing Floor such a fantastic game, we have Killing Floor 2.

The first thing the developers made clear at the start of the presentation is that they don't want to move too far away from what Killing Floor was and instead just improve on them and make it better. Change isn't what they're looking for, rather it is fully focused on making Killing Floor more enjoyable; taking everything that made it fun and fine-tune them into a much better game. 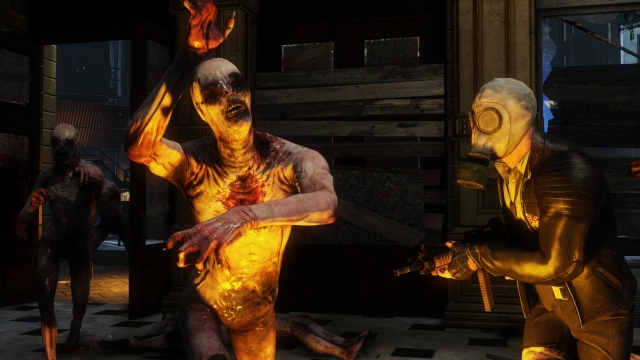 Before I jump into what's been altered and what’s new, I'll quickly run you through what Killing Floor is. Killing Floor is a Survival Horror game that can be played solo or with up to five other friends (some modded servers allow up to 32!) You pick one of the many maps and launch into a game. Rounds have two phases; in the first phase, the map is swarmed by a set number of 'Zeds'. The number is determined by the difficulty level and how many players on the server. The second phase of the round is after all the Zeds are dead and you have some breathing time and you can visit the Trader, where you can buy many weapons and other helpful tools that can aid you in your fight. After a set amount of rounds (determined by your difficulty), the Patriarch appears; a huge Zed with a Gatling Gun and a Rocket Launcher. His arrival is signalled within the game via a short cutscene, but you can also tell that he's arrived when your team-mates start shouting one of the following:

"WHERE THE FUCK DID THAT ROCKET COME FROM"

And, my personal favourite:

"I SAVED ALL MY MONEY FOR THIS WEAPON -quits the game-"

Now, onto Killing Floor 2. The first point to hit on is that the perk system has been re-balanced. In Killing Floor, levelling up your perks was more of a chore than a game mechanic, and there would always be that one bastard that would sit there welding and un-welding a door whilst you all die, just so he can level up his Support perk. In Killing Floor 2, levelling up your perks won't be so difficult, giving a bigger sense of progression. As levelling up is much easier, there are more levels for each perk. There are also at least three new perks that will be found in Killing Floor 2, in addition to the original seven. Not only this, but you can get perk skills. Within your perks, there are different categories, in which you will find skills. These skills can benefit you as a single person or benefit your whole team. For instance in the 'visibility' category, there is the skill of either giving yourself night-vision goggles (that replaces your flashlight), OR (you can only assign one skill per category) you can make stalkers (the invisible Zeds) more visible for all your team. 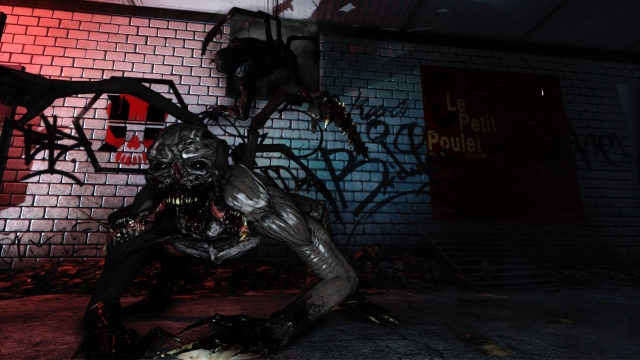 Before, Killing Floor was set primarily in England. Now they have expanded it even further and you can visit other places all over Europe that are in ruins, such as 'Burning Paris'. There will be a slight storyline to Killing Floor 2 as well as much more of a backstory behind the Zeds and their origin. The levels themselves will contain dynamic lightning and many things in the environment are destructible. Within the levels will also be hidden clues that provide a second, much deeper storyline should the player(s) be willing to find them. The true stories behind these clues will not be told and will instead be left to the players imagination and interpretation. Not only this, but many levels will contain little Easter Eggs for the player to find.

Weapons, weapons, weapons. Weapons are something that made Killing Floor so special; there were loads of the bloody things. Buy them off the Trader! Find them in the corner of a dark room! Pry them from your 'friends' cold, dead hands! You're never more than a stones throw from a weapon in Killing Floor, and in Killing Floor 2, weapons are even more accessible, in the fact that you start off with an assault rifle to get you right into the action, rather than running around with a 9mm pistol for several rounds.

Whilst we’re on the subject, the weapons (and the rest of the game) have had their graphics drastically improved. They’re very smooth and are animated in over 200 FPS and were all individually captured with Mo-Cap technology. Zed-Time (A mechanic in which time slows down on 'badass moments') has been improved. Not only can you see your bullets and their distortion trials in Zed-Time, but all colours except the Red Channel (blood) fade to grey. We were also very surprised at how the developers commented on the fact that, unlike most games, blood does not fade away. You could theoretically paint the whole town red. As they have cranked up the gore in Killing Floor 2 (Zeds even have 19 points of dismemberment and blood goes goddamn everywhere), this is a very effective choice. 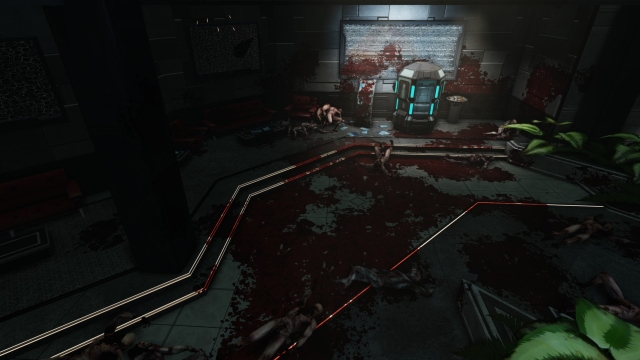 Even more on weapons! Melee weapons were a very risky move for players in Killing Floor. At times they were good and others they got you killed in a painful and horrible manner. But in Killing Floor 2, they have re-jiggled the melee weapons and now they are just as dangerous and life-saving as a flamethrower. Swings are a lot more fluid and strikes are in sync with your movement (if you're walking to the right, you'll swing your weapon to the right.) You can also block with a melee weapon, nullifying some damage that you are taking. Timing blocks right can allow you to stun and counter-attack the offending Zed. Finally, if you are backed up into a corner, you can draw your melee weapon and, as you draw it, swing it round in a quick attack, allowing very rapid self-defence in tight situations.

You wouldn't have an FPS game without an enemy, and that's where the Zeds come in. You'll see many old faces when it comes to Zeds in Killing Floor 2 but some may have new looks to them. Not only do they now look fancy, but they now have special moves that they can use. These can be simple things such as diving out of the way of bullets. The higher your difficulty, the more skills they use, making them hit harder and much harder to kill.

Overall, Killing Floor 2 is looking to be a fantastic sequel to a fantastic game. With no official release date as of yet, we can only rely on Tripwire to give us more news and information about the game to satiate our lust for mutant-experiment-zombie hunting.

Killing Floor 2 Christmas Update is Out

10 Games to Play with Friends this Halloween 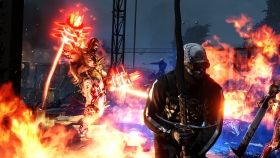