Comedy video games are something of a rare breed, and in the past it’s not been difficult to see why. Comedic timing and relevant jokes are difficult to manage in a product that takes years to create and relies entirely on how the player interacts with the game. Yet the genre has seen something of a resurgence as of late with South Park: The Stick of Truth leading the charge. So it’s great to see Daedalic, a publisher typically associated with rather serious affairs, pick up a promising new point-and-click comedy adventure game from Spanish studio Nexus. Randal’s Monday is nothing short of a nerdy gamer’s dream and is shaping up to be an excellent relation of the wonderful Monkey Island series.

The plot is purposefully familiar: the eponymous Randal wakes up on a hung-over Monday morning with his best friend’s engagement ring in his pocket. Apparently void of any moral qualities he sells the ring at a pawn shop, only to receive a curse for his terrible act. Randal is then seemingly stuck forever within that Monday, doomed to repeat it over and over until he can lift the curse. It’s fantasy storytelling 101, but the point of Randal’s Monday isn’t to be totally original, it’s to provide an endlessly interesting and hilarious game for those with a love for all things nerdy. Well, I’m sure the Nexus team are aiming for a general audience, but there’s no doubt that the core gamer crowd will be their main source of income. The game, you see, is loaded with subculture references from classic sci-fi movies, TV shows, books and endless videogames. Each of the 40 different in-game locations have been crafted with this reference-centred concept in mind, and even when seeing the game in action for only 15 minutes, it’s clear to see that Nexus has poured a lot of time and effort into creating a world that nerds, gamers and nerdy gamers will love to explore. It was clear during their presentation that this concept is important to the Spanish developers; while most point-and-click adventure games force you to explore the world in an effort to complete puzzles, Randal’s Monday encourages you to discover its locations simply because you want to find more references.

Of course, the classic point-and-click puzzles are still in place and those who are attracted to Randal’s Monday by the comedic writing and subculture references will have to become familiar with the style that’s become a hallmark of Daedalic published games. In many ways, this could be the one key weakness of Randal’s Monday: while the point-and-click gameplay will certainly appeal to those already familiar with the genre, or those who fondly remember Monkey Island, there’s an undeniable barrier that the genre brings with it - hopefully the comedy will help unfamiliar players over this hurdle. 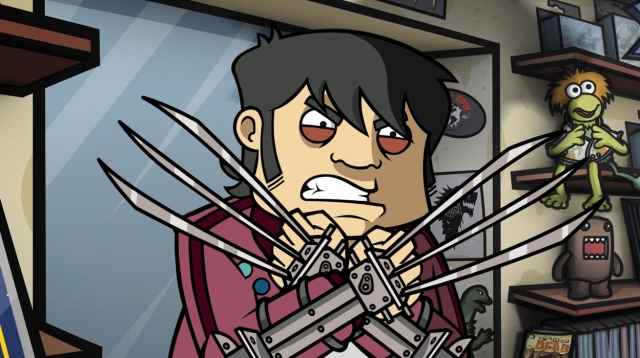 Based on what we’ve seen so far, that’s a strong possibility. The Randal’s Monday writer (who, according to the trailer, is apparently Terry Pratchett's barber’s best friend’s neighbour) doesn’t pull any punches and is fully aware that gamers, to stereotype massively, don’t really go for subtle or generic jokes. What we saw of Randal’s Monday was rude, overt and very funny - some rather black humour, the likes of which you’ll only really see in The Stick of Truth, displayed a true affinity between the writer and the target audience. That’s a hopeful sign for the rest of the game, but we’ll have to wait until release to see if the laughs keep coming.

All of these references and comedic moments will be placed within a neat little story that’s affected by the choices the player makes. It’s a concept that fits excellently with the time-warping storyline as changes you make on one version of the Monday will be in effect on the next Monday. There will be seven ‘Mondays’ in the final game and each of them could be different every time you play the game - although it must be said that comedy games have never really lended themselves well to replayability. Perhaps Randal’s Monday will buck that trend - but even if it doesn’t, Nexus claim that the game can offer over 20 hours of gameplay, so long as you take an interest in the subculture references. 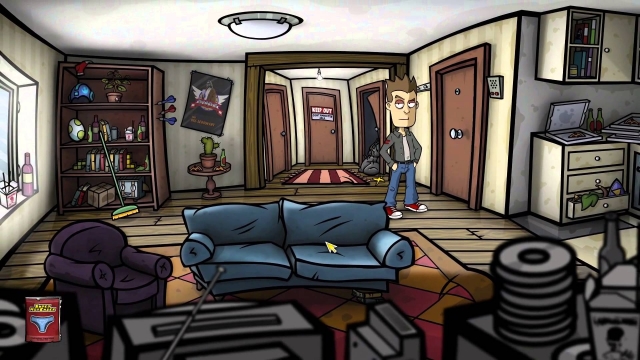 It’s very difficult to predict the success of a game like Randal’s Monday, so much of that success is based on whether the developers and the writer can maintain the jokes and the interesting references for the entirety of the game. As mentioned, what we saw filled us with optimism - Randal’s Monday could well be (arguably) the first properly funny point-and-click adventure game since Tales of Monkey Island and while Daedalic could face some issues marketing such a niche type of game, strong gameplay, writing and overall design should push the game into the wider public eye. So now it’s just down to Nexus Game Studios to provide a worthwhile experience by the early November release window. It won’t be easy, but they’ve won our support.