"Pokémon with cars”, that’s how Slightly Mad studio head Ian Bell describes not his own team’s title, but just about every other racing game on the market. That’s fun, he concedes, but it’s not how you make a truly engrossing driving game. With only around 70 vehicles on offer (compared to the hundreds in games like Forza), it’s not surprising that the team at Slightly Mad are hedging their bets on elements other than an extensive garage. “It’s not about collecting cars,” says Bell, “it’s about driving them”. According to Slightly Mad this isn’t some generic arcade racing game, this is nothing short of the ultimate driving experience. Based on our time with the game at this year’s Gamescom, they could be right on the money.

You’ve probably heard of Project CARS; the game has been looming over the racing genre for years now. Originally as a PC elitist simulation game, but increasingly as a new alternative to the ‘simulation’ style of Gran Turismo. That’s because Project CARS is, just as the name suggests, a project that’s been developed with a huge amount of support from its community long before early access and community development was cool. The ‘cars’ in the name, afterall, stands for Community Assisted Racing Simulator. Because of this, the game has been around and playable for quite some time; but with official release now on the horizon everything's been kicked into high gear. Even without seeing the game itself, it’s easy to assume that Project CARS is going to be something special. The London-based developers sure have the credentials for this kind of game - having developed the brilliant PC racing sim GTR series as well as the Need for Speed: Shift games, two of the most well-received titles in the series’ history. Not only this, but the Slightly Mad team have had over 85,000 community members on hand to help them improve their game, all through their own bespoke mass development platform - World of Mass Development. Just to top it all off, the game has been developed with the assistance of real-life racing drivers including former Stig Ben Collins and Nicholas Hamilton.

That's an impressive opening pitch by all accounts, but it gets better. Project Cars will feature a unique career mode that looks to be the answer to many a racing fans’ pleas in relation to a single-player driving experience. The single-player mode is a true racing career in every sense of the word, as you work your way through different driving disciplines, earning new contracts and team deals along the way. This mode will either make or break Project CARS, and while it’s difficult to discern how the mode will play out in full come release, Slightly Mad has made all of the right noises so far. While the extensive development time has undoubtedly agitated a fair few community members, it has helped make Project CARS arguably the single most technologically advanced video game around right now. The visuals are simply incredible; with picturesque detail, dynamic environments and some genuinely exciting lighting effects. While the PC version obviously looks better, the PS4 and Xbox One versions are still cutting edge. As if that wasn’t enough, the game will also support cinematic 12K resolution! That’s three 4K screens alongside one another; obviously that’s not exactly an ‘every man’ setup, but it’s impressive nonetheless.

Those impressive visuals aren’t just a showpiece of their own, they also have an impact on the gameplay. A dynamic and realistic time and weather system is a key element of the game that Slightly Mad display with pride. Rain puddles in realistic areas of the track and affects the handling of your vehicle, while darkness is true, terrifying blackness. While most games wash out the screen a bit and call it dark, Project CARS will feature pure pitch-black night, where only your headlights can stop you from crashing. These features are perfectly demonstrated in the game’s officially licenced Le Mans 24 hour race. With a realistic passage of time, CARS is the only game in which a player (or, preferably, players) can race the entire 24 hours of Le Mans - should they be crazy enough to do so. 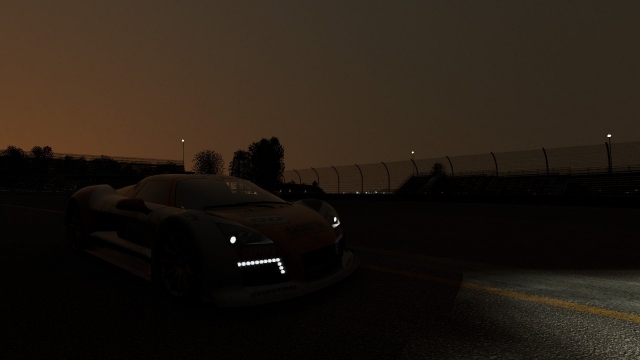 That’s just one example of the numerous smaller features that have been jammed into Project CARS. Others include realistic pit stops, a radioman voiced by Ben Collins (who, in a neat touch, comes through the Dualshock 4 on PS4) as well as online racing with plenty of players: 20 on console and up to 64 on PC - although the latter has yet to be locked down by Slightly Mad. It’s also worth mentioning that the game supports Oculus Rift and works excellently with the VR headset. Oh, and while Ian Bell noted that the game isn’t about collecting cars, he was happy to say that the game features the largest collection of tracks of any recent racing game.

There’s a very, very strong whiff of TOCA Touring Cars within Project CARS’ greasy exhaust pipes, both from a gameplay and presentation standpoint. The game strikes an excellent balance between fun racing and true simulation - although the Slightly Mad team are keen on emphasising that CARS is a racing game for racing fans, not casual drivers. It’s shaping up to be a real winner, and a surefire dark horse in the holiday racing game...race. Ian Bell sums it up like this, “you’ve got your Forzas and your Driveclubs, but if you’re a proper racing fan, this is the only option you’ve got.” We’ll go one better Ian: this is the only option we want.

US Race Car Pack Now Out for Project CARS