The music began and we were treated to a big, flashy, badly pixelated video showing a screen from all of the upcoming titles. They were too fast to notice, but soon enough Assassin’s Creed Unity came up on screen. Calm music and peaceful French people - before the inevitable revolution hits and people wind up dead. Then Arno appears, doing some of his parkour across Paris, interspersed with gatherings of revolutionaries and poignant rooftop-standing. Then it cuts to Arno stood in a chamber in front of three men positioned higher than him. An assassin council, perhaps? Given the Assassin sigil below them, it seems most likely.

Gregor Bieler, General Manager from Xbox Germany arrived on stage and welcomed everyone. In German with English subtitles. However, he only appeared to introduce Phil Spencer, Head of Xbox. He also welcomed everyone to Gamescom and said it’s an incredible time to be an Xbox One player as the community is growing into 29 new markets this year, including across Europe, starting 2nd September.

“Xbox is the best place to play. You can play the biggest blockbusters” he stated, then listed Grand Theft Auto V, Assassin’s Creed Unity, Destiny, Call of Duty: Advanced Warfare, Fifa 15, Sunset Overdrive, Forza Horizon 2, Ori and the Blind Forest and Halo: The Master Chief Collection. However, he waited to tell us why we would want to play the first five on Xbox instead of another platform.

It started with FIFA 15.

He began with telling us there will be exclusive content for the FIFA Ultimate Team Mode with Legends which will only be on Xbox One. He brought David Rutter on stage to talk about the 50+ Legends only on Xbox - who then brought former-footballer Peter Schmeichel on stage. Together they built the Ultimate Legends Team, seen above - with himself in goal of course. Some of the Legends announced included Peter Schmeichel, Roberto Carlos, Roy Keane, Sir Bobby Moore and Alan Shearer. They then announced the Fifa 15 bundle which will retail for £349.99. David & Peter also mentioned that EA Access will give Xbox One users access to FIFA 15 before anyone. 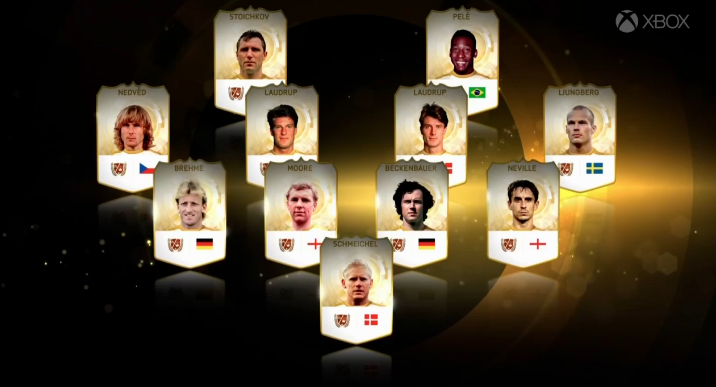 Next up we were told about ID@Xbox and how it’s helping to bring lots of games ‘first to console’ - a phrase they were VERY proud of - on Xbox. Chris Charla, director of ID@Xbox came out and introduced twenty-five games, including: Blues and Bullets, No Time to Explain, Plague Inc: Evolved, Space Engineers, SuperHot and - of course - Goat Simulator.

They showed us trailers for five of the first to console games: Space Engineers, SuperHot, The Escapist, SMITE and Below. They also announced that Team 17 are bringing their entire catalogue of console games to Xbox, as well as The Escapist.

We were treated to some gameplay of Call of Duty: Advanced Warfare, along with the announcement of the second bundle of the day. Coming 3rd November with 1TB hard drive and custom-designed controller and console. There will also be add-on content exclusive to Xbox

The final multi-platform announcement they made was about Evolve, as well as showing us actual gameplay. There will be an open beta in January, only on Xbox One, before the launch on the 10th February with premiere content coming first to Xbox. 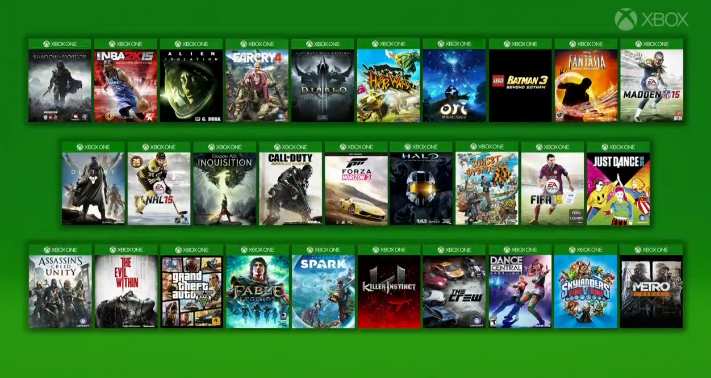 Phil then went into the exclusives which will be coming to Xbox. He started it off by having Crystal Dynamics’ Darrell Gallagher show us Rise of the Tomb Raider, which will “define survival action” when it’s released holiday 2015 exclusive (EDIT: Limited exclusive) to Xbox.

Sam Lake from Remedy Entertainment brought us a live demo of Quantum Break. Protagonist Jack Joyce has to stop the end of everything after an experiment breaks time. Jack was caught by the blast and now can manipulate time. He exits an apartment and makes an escape before being attacked by some people. He can both stop time or slow it. He dispatches the three before more come at him. We see various time-based effects such as him freezing a grenade as it explodes or running past people who can’t see him move that fast. When he freezes someone and shoots them multiple times, the bullets all hit at once causing more damage. The same of which can be done to exploding barrels and tanks. He tries to make an escape via the waterfront but a helicopter stops him. The radio is chattering a lot of time as the troopers try to maintain order. As Jack is escaping, a truck comes at him off a bridge and a stutter occurs, freezing everyone and everything. He must navigate stutters as he is not able to control them and they might restart at any time. He explores a little, seeing some protesters being fired upon. The baddies have technology that lets them function in stutters too. Heavy armour suits. He destroys the armours and the demo ends with the logo and some vignettes. Sam then promised more to come this week during Gamescom.

Fable Legends is shown next, just giving us a brief view of the gameplay as four heroes fight some monsters. We also get to see the view from a player being the villain, summoning monsters to defeat the heroes - then ends on chickens. Phil mentioned the multiplayer beta opens on the 16th October, and you can sign up now at fablelegends.com

Phil paused to mention that Xbox has as many games in development in Europe as it does in the USA. Probably because Fable Legends and the next game, ScreamRide, are both being created by British developers. The ScreamRide trailer shows some fun-looking theme park-style gaming - but this time you’re allowed to murder the patrons.

Dan Greenawalt presented some Forza Motorsport 5 news - available today are some new free cars, including the Formula-E Spark, the 2015 Ford Mustang and a Rolls Royce. Then they talked about Forza Horizon 2 coming 30th September. As well as a video they explained that it will have over 200 cars and an open world, as well as being able to connect with others without the use of lobbies through dedicated servers (another term they loved). They called it ”The most social racing game” due to the fact there will be multiple online modes, including road trip and free roam which will let you just drive around the open world and explore. There will also be car meets, so you can meet new people, share your taste in music and show off your designs.They also mentioned Forza Fuel, which is some kind of points system.

Thomas Mahler, game director of Ori and the Blind Forest presented a stage where Ori has to escape from rising water, using his abilities but is then is attacked by a screen-filling boss as the demo ends.

Ted Price, CEO of Insomniac Games then arrived on stage and presented a new trailer for Sunset Overdrive. We meet Floyd who survived the energy drink turning people into monsters thing - even though he had a hand in creating it for Fizzco. Fizzco are sending robots to kill normal people as well as the monsters, obviously for nefarious reasons. We see some shooting and it ends on a boom, as it should. It’s also the third bundle to be announced, with a white Xbox and controller, for £349.99 available from the 31st of October. Or as Ted said “October thirty-fir… Thirty-one.” before leaving the stage.

To close the keynote, they went full Halo. Presented by Bonnie Ross - the head of 343 Industries Studio - she first announced the Halo Channel. Coming to Xbox One it will be a hub for everything Halo, from matchmaking to news and community all the way to being able to watch Halo: Nightfall. It will be on Xbox One and Windows Mobile. She gave way to Dan Ayoub to present the Master Chief Collection. As November is the 10th anniversary of Halo 2, they have brought a lot of stuff back to how it was, including the skill-based rankings in multiplayer. Someone on stage played a little of Halo 2, showing us classic and new mode which allegedly can be switched between - though it was not seamless if that is indeed what they did. All four games will run at 60fps with new graphics and sound effects, but game-accurate.

He also announced the fourth reimagined multiplayer map - Sanctuary. Dan waited for applause, but the entire audience remained silent. He then showed us four “Top Halo players” playing it and Blue team won.

Bonnie came back for a final reveal, telling us about Halo 5: Guardians. The multiplayer beta is available in The Master Chief Collection from 11th November, and will run from 29th December to 18th January. They also mention it will run at 60fps on dedicated servers, and playing in the beta will unlock some things you can take into Halo 5.

Phil came back to tell us “You wanted more choice how to purchase games” - then announced the final bit of news. The ability for Xbox One users to pre-order & pre-download games with Forza Horizon 2 & FIFA 15 being the first to arrive, and the promise of more to come. 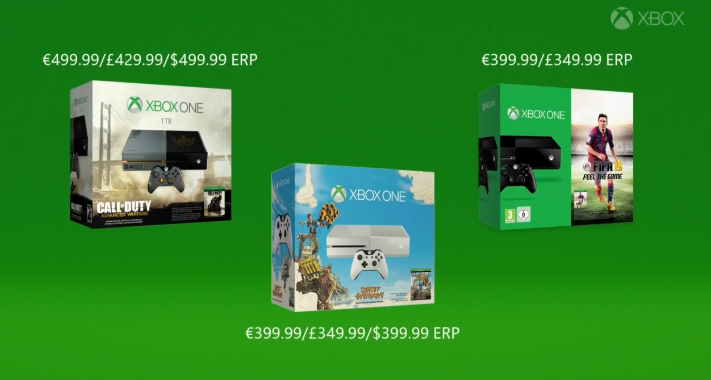 Halo: The Master Chief Collection Could be Coming to New Platforms