“Play offline” isn’t typically a feature that game developers brag about. In the world of city-builders, however, it’s the new fad and it’s the way Paradox and Cities in Motion devs Colossal Order are promoting their newest title, Cities Skylines. If you’re a fan of the genre then you’re probably aware that it’s simply a jab at Maxis’ SimCity which, to the dismay of the vocal minority, spent much of its early lifespan as an online-only game. In many ways, however, that argument detracted people from the real issues that plagued the game - tiny maximum city sizes being the primary problem, not to mention a plague of bugs and issues that persisted long after release.

Cities Skylines is looking to be the counterpoint to the EA monolith; it wants to take your hand, lead you away from SimCity and tell you that everything will be better now. Despite that overarching anti-SimCity vibe, it’s difficult not to notice that Colossal Order’s game already looks a lot like its competition. The UI is made of light blues and whites, the road placement tool looks, and even sounds, identical to that found in SimCity and the game also features a zoning mechanic that works in almost the exact same way to the Maxis equivalent. The only real difference is that you can brush the zones onto just about any area of your city, as opposed to assigning specific roadside patches. Colossal Order may be presenting its game as the opposition, but the team appear to be happy to take cues from Maxis. 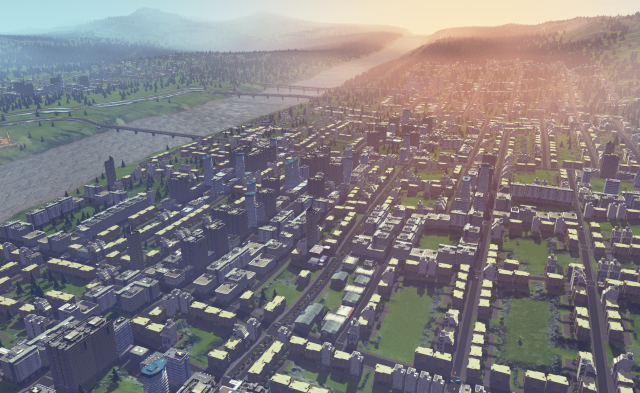 That’s not a bad thing, mind you, as certain elements of SimCity were brilliant - including those three aforementioned elements . Where that game fell down, however, Cities Skylines looks to take the prize. City size is the most noticeable divergence, even if Colossal seemed to think that playing offline is actually more important. While the other game only allowed players to build within a rather small space (supposedly because it suited the ‘regional design’), Skylines allows you to build some ginormous cities, the likes of which we’ve seen in older games, but certainly not to this level of detail. Whole regions can be crossed and viewed without loading screens, and cities that started in separate locations can end up joining one another through growth.

We wouldn’t have believed it had we not seen the game running at this year’s Gamescom, but the (impressively small) nine-person team seem to have gotten the most out of their engine of choice. It’s not like the game suffers visually because of this, either; while we didn’t get a chance to look in proper detail, Skylines looked great in action - it’s got the same ‘blurry details’ thing going on as SimCity, but when you’ve got so much on-screen at once it’s a minor concern. We can but hope that this level of scale and fidelity is maintained as the game continues its development, as it could well be an important factor for fans of the genre. 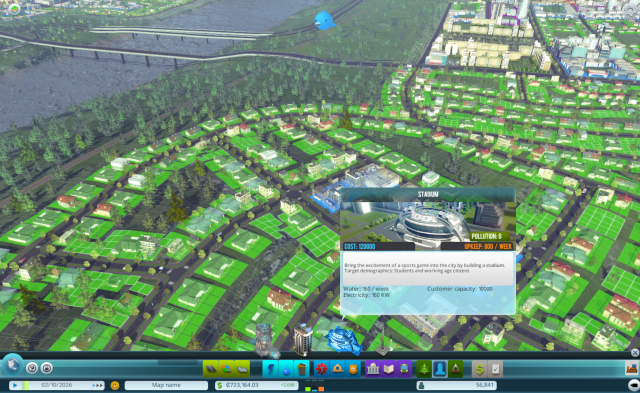 Through all the similarities and comparisons, it can be easy to lose track of the new aspects that Cities Skylines is introducing, and a lot of them sound great. An interesting policy system essentially allows the player to set specific regions within your cities (with customisable names!), then assign special policies and conditions to these regions. Changes in taxation, for instance, or a blanket no pets policy. We didn’t get a chance to see this mechanic in full display, but it sounds like an excellent opportunity for a bit of micromanagement worthy of a Paradox published title. In fact, the whole economic system looks to be pleasantly deep, a mechanic that couples with Colossal Order’s claim that Skylines is a ‘hardcore city-builder’.

Another important and unique aspect of the game is customisation. On a basic level players will be able to modify the landscape around their cities, influencing waterflow and other crucial natural considerations. On a more advanced level, and in classic Paradox fashion, Cities Skylines players will be able to mod the game. Colossal Order didn’t want to say how far the mod tools will stretch, but for now the team showed us a small and simple example: a statue that had been modified to look like a bus from their original series. Supposedly though, the game will feature modding tools for a map editor, asset editor and even the ability to customise gameplay. Steam Workshop would be the obvious place to center this feature. 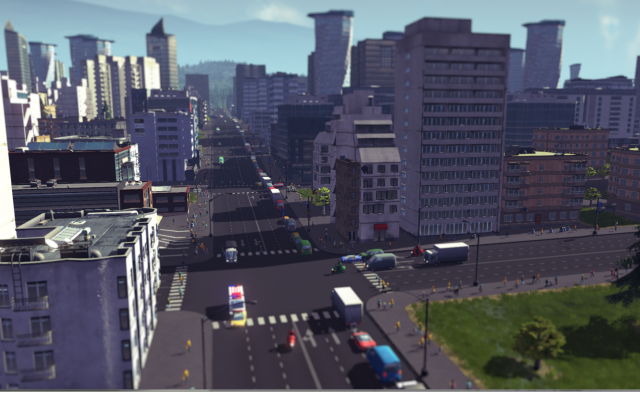 It’s all sounding rather hopeful at this point and while we didn’t get a chance to go hands-on with the game, there’s a lot of potential here. Now is undeniably the ideal time to announce and launch a brand new city-building game; disgruntled genre fans are looking for a modern equivalent of SimCity 2000, something they can really sink their teeth into, and Cities Skylines is looking as though it has what they’re looking for. It’s big, adaptable and seemingly comfortable while maintaining a degree of complexity - well, that’s the aim at least. We’ll have to wait until next spring to play the full game, until then we’re looking forward to getting some proper time with the game.

Cities: Skylines and Farming Simulator 19 Are May 2020’s PlayStation Plus Titles