Let’s get something out in the open here, because Robot Entertainment seem strangely at odds with saying it: this is an Orcs Must Die! MOBA. There, I said it. It’s not a bad thing, if anything it’s a logical step for the series and whether it’s the ‘genre-of-the-moment’ or not is somewhat irrelevant. Sure, EA, Blizzard and others are all pushing MOBAs, but Orcs Must Die! Unchained doesn’t feel like a shameless cash grab, not by a long shot. So admit it guys, you’ve got a MOBA. Then take this comment from me: it’s looking very, very promising.

The Orcs Must Die! series has already provided two rather good tower-defence strategy games that rely on a third-person view in lieu of the standard top-down angle. That tradition is being carried through to this new game; Unchained will use the familiar third-person camera, supposedly to bring players closer to the action, making for a more direct and tactile experience. It’s a concept that has worked a treat for rising MOBA Smite, so one can assume that it’ll pay off for Robot Entertainment too. In fact, the third-person view is something of an indicator for the game at large: Unchained is looking to be one of, if not the, most approachable MOBAs ever made. Considering the strong sense of difficulty typically associated with the genre, that could be a key selling point. The excellent art direction is one key difference between Unchained and most other MOBAs. The kooky general presentation typically associated with the series replaces the serious stylings of most genre headliners. The game is also much more forgiving than a lot of the competition; admittedly, this is largely due to the fact that the game is still in beta and so the community is still growing and learning, but the game is much more accessible than most of the competition. Rather like the other games, however, Orcs Must Die! Unchained is a free-to-play game that’s monetised with buyable characters, skins and cards that give you more abilities in matches. It’s not pay-to-win the developers ensured me, but you will have to pay to have permanent access to the coolest stuff.

So what does the gameplay actually consist of? The core format is classic MOBA: two player-controlled teams oppose one another across a multi-laned map. The teams must defend a central statue from the enemy’s minions while attacking the statue on the other side. There are a whole bunch of characters to choose from, each with their own abilities, as well as a variety of minions ranging from numerous Kobolds to overpowering Trolls. Plus, in classic Orcs Must Die! fashion, traps can be placed in certain places on the maps, making it much more difficult  for enemy minions to traverse. 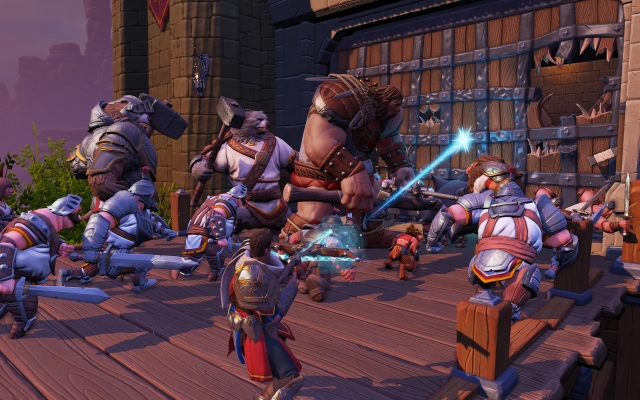 The heroes are probably the most interesting aspect of Unchained and as with other MOBAs they bring an incredible amount of depth and variety to the game. The Prospector character I used during my hands-on, for example, could build tunnels across the map allowing players to quickly teleport from one point to another. He could also throw bombs that briefly deactivated traps, making up for his lack of attack strength. Unique abilities like these can be found across all of the in-game heroes - The Kobold King can boost the power of the typically weak Kobold minions, for instance, or The Master can feign his own death. They’re an inventive bunch, and while some may be ruffled by the inability to play as them all from the off, there’s always a chance you’ll win one of the characters in a post-game card pack.

Based on a hands-on session with the devs and a bit of time with the beta, I’m happy to report that the game plays very well. There’s a satisfying heftiness to the gameplay that’s missing from most MOBAs and all of the extras are well executed and satisfying. The minions, for instance, are varied and can be upgraded in cool ways. Plus, seeing as minions, gear and traps are all part of the micro-transaction system, there are a lot to choose from, even at this point in the game’s development. That kooky presentation makes items such as these all the more cool, and for those who don’t like to support developers with their wallets, there’s plenty of opportunity to unlock items without paying a single penny. 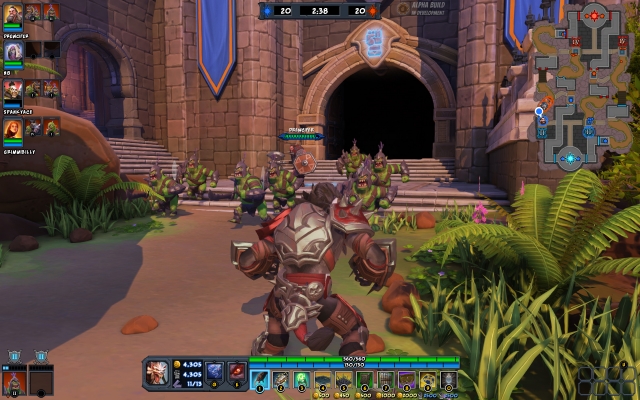 In many ways, Orcs Must Die! Unchained could be the perfect introduction to the world of MOBAs and Robot Entertainment is honestly missing a trick by not exploiting this selling point. With the genre ever increasing in popularity it’s about time that someone offered an experience that’s not quite as punishing as the likes of DOTA 2 or League of Legends, and has a presentation to match. Little did we know that there was a fitting candidate waiting in the wings all along. Orcs Must Die! Unchained is tapping into a relatively unexplored area, and whether Robot and Gameforge push it that way or not, there’s a good chance that it could become the introductory MOBA game.